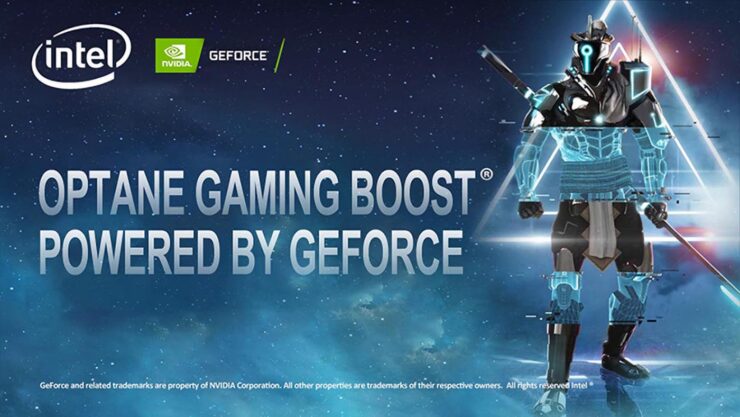 Update: This is an April's Fools joke. 🙂

I have been seeing a lot of aspiring next-gen console owners praising the SSD of the upcoming Sony PlayStation 5 and explaining how it would make a big difference in gaming performance. It looks like Intel and NVIDIA had the same idea because they recently held a small briefing for select press and naturally the slides leaked out within record time. Intel's Optane Gaming Boost is a software add-on that uses proprietary GeForce tech to offload storage-intensive tasks to the SSD and speeds up gaming performance.

While conventional wisdom would dictate that an SSD has next to no relation with GPU performance, it seems as if fans of the Sony PS5 were right all along. Intel and NVIDIA seem to have responded directly to this vacuum in the gaming technology space and quickly came up with a software solution that will boost gaming performance by up to 50% in select cases. According to the briefing, this is possible because SSDs can handle special computational tasks known as "storage-intensive" tasks (which no one apparently knew of before). This frees up a lot of GPU compute for other graphics processing and results in higher FPS. 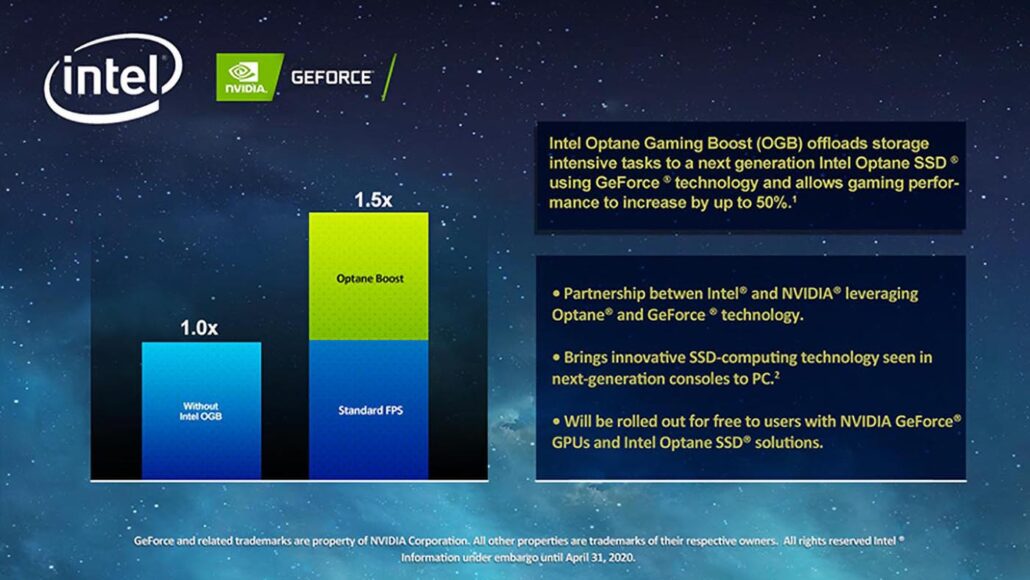 The official announcement appears to be set for April 31 of this year, so we won't have to wait long before this tech is made public. For now, it appears that only users with an Optane SSD and an NVIDIA GPU will be able to take advantage of this tech but I have no doubt that AMD will come up with their own version shortly. The partnership also raised some eyebrows because NVIDIA and Intel - who historically have had quite an amicable relationship - are now rivals since the latter is preparing to enter the market with their Xe series of GPUs.

We reached out to some spokespersons of both companies (who wished to remain anonymous) and they had the following to say about the venture:

"To be honest we were alerted to the existence of an SSD speedup by fans of the upcoming next-generation consoles. We had no idea that something like this was possible before." Spokesperson 1

"We are very excited about this new breakthrough and are confident that we can roll out the tech to non-Optane Intel SSDs in the future as well. Utilizing your SSD for graphics processing is a truly revolutionary idea." Spokesperson 2

The slides themself mention that they expect gaming performance to increase by up to 50% in select cases. This additional performance is all thanks to the SSD intervention using Intel OGB (Optane Gaming Boost).

It does raise some questions on whether utilizing the SSD for processing is going to result in reduced endurance and lowered life spans of the flash memory. Although I would say that it is up to the gamer to decide whether they would prefer a long-lasting SSD or increased gaming performance. Personally, considering the lifespan of flash memory and affordability of TLC SSDs nowadays, I would happily take the speedup. GPUs are still pretty expensive and if you can use your SSD to get such a large speedup - why the hell not?!