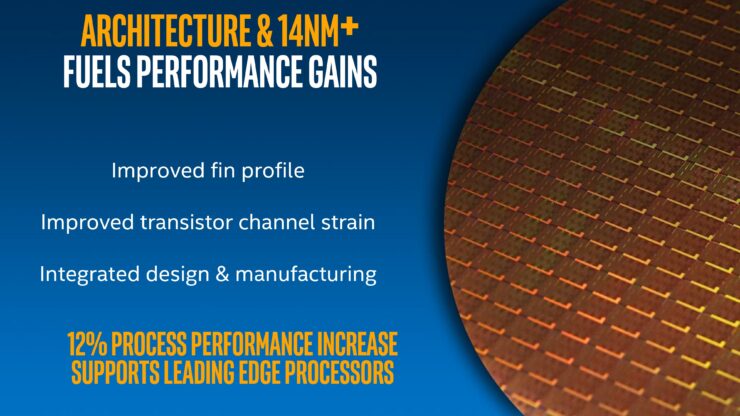 Intel has just recently launched the Kaby Lake architecture with a total of 6 SKUs as well as the m-series. Building up on the 14 nanometer process, the new iteration of the architecture that should never have existed is being dubbed 14nm plus.

Kaby Lake architecture will introduce quite a few ‘optimizations’ over Skylake; and a new media engine is one of the few things explicitly mentioned in the slides. Featuring a Gen9 graphics architecture, the new iGPU will be able to support hardware based HEVC 10 bit (4K UHD) and VP9 decoding. As far as actual performance gains go,  Intel’s slides boast a general productivity improvement of 12% over the last generation and over 19% in terms of web performance.

The processors will be featuring in up to 100 designs in the last quarter of 2016. Here is where things get interesting though.  The first thing we mentioned was the S 4+2 category – which is the shorthand for the mainstream quadcore variants by Intel. According to the roadmap this is going to be landing in December this year. Also notice the fact that this has HDCP 2.2 stated in the top label – which means HDMI 2.0 is going to be fully supported.

Intel takes computing to the next level with the 7th Gen Intel® Core™ processor family. The 7th Gen Intel Core processors are designed for the Immersive Internet and built on a strong foundation of the Skylake microarchitecture. Intel’s latest 14nm processors deliver more responsive performance than ever1, fantastic entertainment and gaming, robust security2, and even more natural, intuitive interactions with your PC. With incredible improvements that transform the viewing experience with 4K UHD videos, 360-degree videos , multiple video streams, and premium content playback3, the 7th Gen Intel Core processors for mobile platforms enable a new way to enjoy the sharp and engaging content across a range of form factors.


Intel scales 7th Gen Intel Core processors to a variety of PC designs at a wide range of price points, which may include features such as Thunderbolt™ 3 USB Type-C single-wire connection, low power premium audio and hassle-free facial recognition such as Windows* Hello. Users can also expect to see PC designs based on 7th Gen Intel Core processors with a variety of intuitive input options such as touch, voice, and stylus.

Key benefits of the 7th Gen Intel® Core™ processor family for mobile and desktop PCs include:

RESPONSIVE PERFORMANCE. 7th Gen Intel Core processors utilize a power-efficient microarchitecture, advanced process technology and silicon optimizations to deliver faster performance than previous generation processors.1** Web browsing is snappy and responsive with Intel® Speed Shift Technology. On processors with Intel® Turbo Boost 2.0 Technology, performance and power is dynamically controlled – for cores and graphics – boosting performance precisely when it is needed, and saving energy when it counts. Both the Y-series and U-series processors support two cores and four threads with Intel® Hyper-Threading Technology (Intel® HT Technology), enabling compelling 2 in 1 designs and thin clamshells that achieve a unique balance between performance and mobility. PCs enabled with Microsoft Windows Modern Standby are able to wake immediately at the push of a button, so users don’t have to wait for their system to start up.

**Software and workloads used in performance tests may have been optimized for performance only on Intel microprocessors.

Performance tests, such as SYSmark and MobileMark, are measured using specific computer systems, components, software, operations and functions. Any change to any of those factors may cause the results to vary. You should consult other information and performance tests to assist you in fully evaluating your contemplated purchases, including the performance of that product when combined with other products.          For more complete information visit www.intel.com/benchmarks. Configurations: see page 13 for system configuration information.

This announcement of new 7th Gen Intel® Core™ processors will include

We expect OEMs to start shipping 7th Gen systems to end users by beginning of September. We also expect strong ramp of 7th Gen mobile systems and a variety of mobile systems will be in market in time for the holiday shopping season.13 For more information, visit www.intel.com or customers can also contact their preferred PC OEM(s) for system offerings or their preferred retailer(s) for system availability.