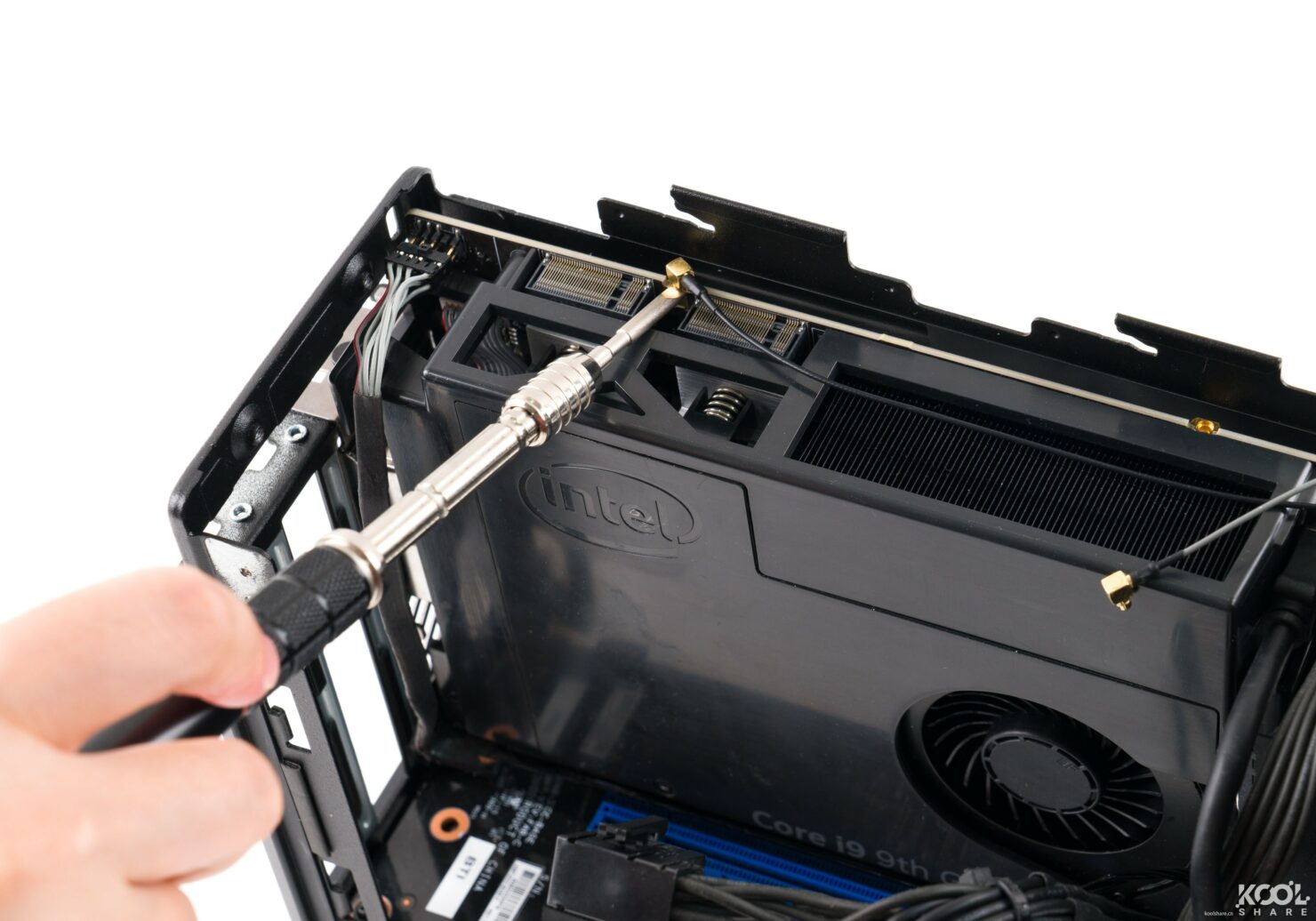 I think we have the winner for the most thorough leak in history with this Ghost Canyon NUC and Element Modular PC board review posted on Kool Share (do give it a read!) In a leak that contains literally everything that you could possibly want to know about the upcoming platform, the reviewer takes a look at Intel's upcoming Ghost Canyon NUC which contains their brand new Element board (which is a PC in its own right). There were inklings that Intel was planning something very special with the Ghost Canyon platform, and this review is confirmation of it.

Let's start with the basic idea of the Intel NUC 9 extreme (aka Ghost Canyon). Intel has essentially built a chassis that houses its Element PC board along with a combination of IO that makes up the NUC. The element board itself is meant to be swappable allowing Intel to reduce the cost of the upgrade for users in this space. The IO includes a PCIe x16 slot where you can install dedicated graphics cards like the RTX 2060 as well as an additional PCIe x4 slot. Dual-channel DDR4 RAM is supported. 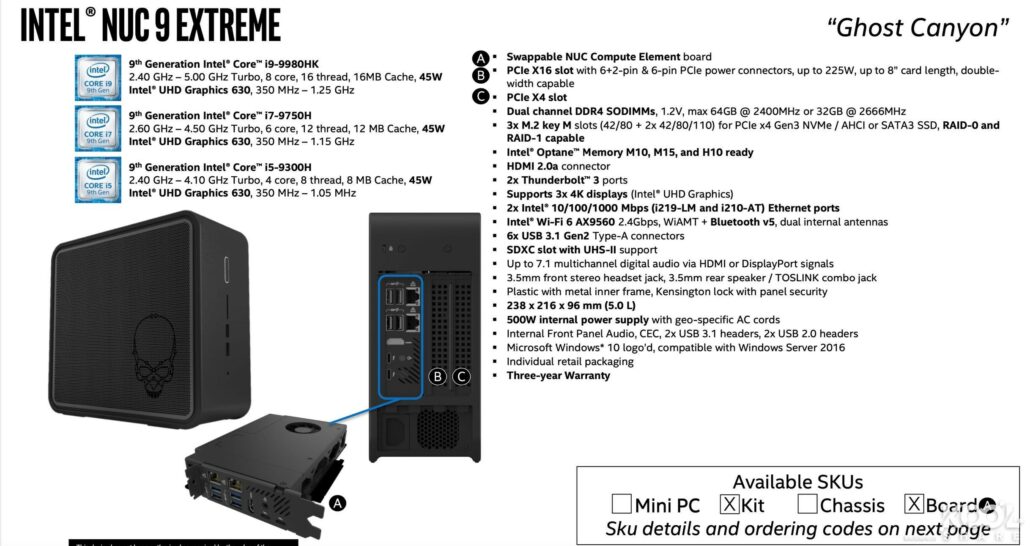 A 500W brick powers the internals (this is clearly a system which packs a major punch) and everything is covered by three years worth of warranty. It is worth noting that this is an engineering sample and the performance and design could change slightly before the retail version hits the shelves. The Element PC board ships in three flavors from the i9-9980HK which is an 8 core/16 thread monster capable of hitting 5 GHz turbo (2.4GHz base) all the way down to the Core i5-9300H with 4 cores and 8 threads and a 4.1 GHz turbo (2.4GHz base).

The pictures below show how the boxy NUC looks like fully assembled. The Element PC board can be seen clearly in the back which houses most of the traditional IO ports like the Ethernet and USB 3.0. In the last image, you can also see the two fans that suck in cold air from the inlets and blow it across the entire NUC. 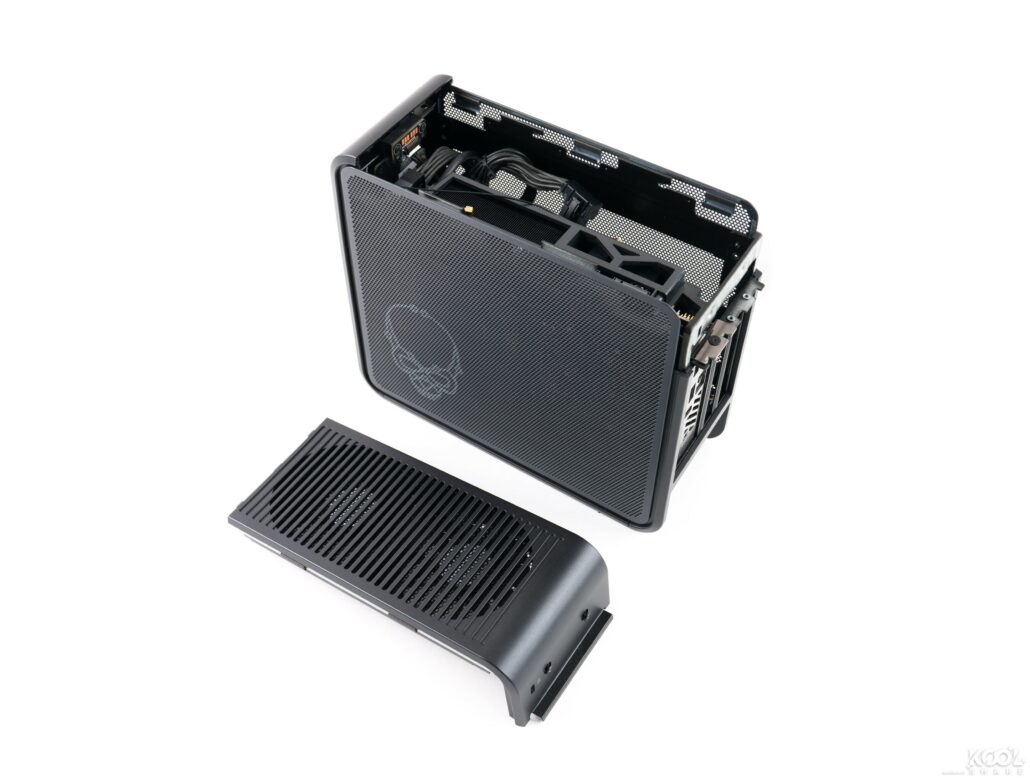 The tiny fan that cools the PSU brick (which is fully removable) can also be seen inside the device. Once you remove the top two fans you will encounter a lot of free space (for a dedicated graphics card) since the NUC does not ship with the PCIe slot populated. You can also now see the body of the Element PC board clearly - which in this case houses the Intel I9 9980HK.

With all these compartments removed you can finally take a good look at the PCIe riser that supports the PCIe expansion slot as well as the Intel Element card in all its glory. It's very interesting to see that the element card ships with its own blower-style fan and is a fully self-contained unit with only some PCIe power cables. The PCIe riser board is completely detachable as well (this is truly a modular PC!). Interestingly, the Element PC board appears to be powered by a single 8 pin connector by the way. 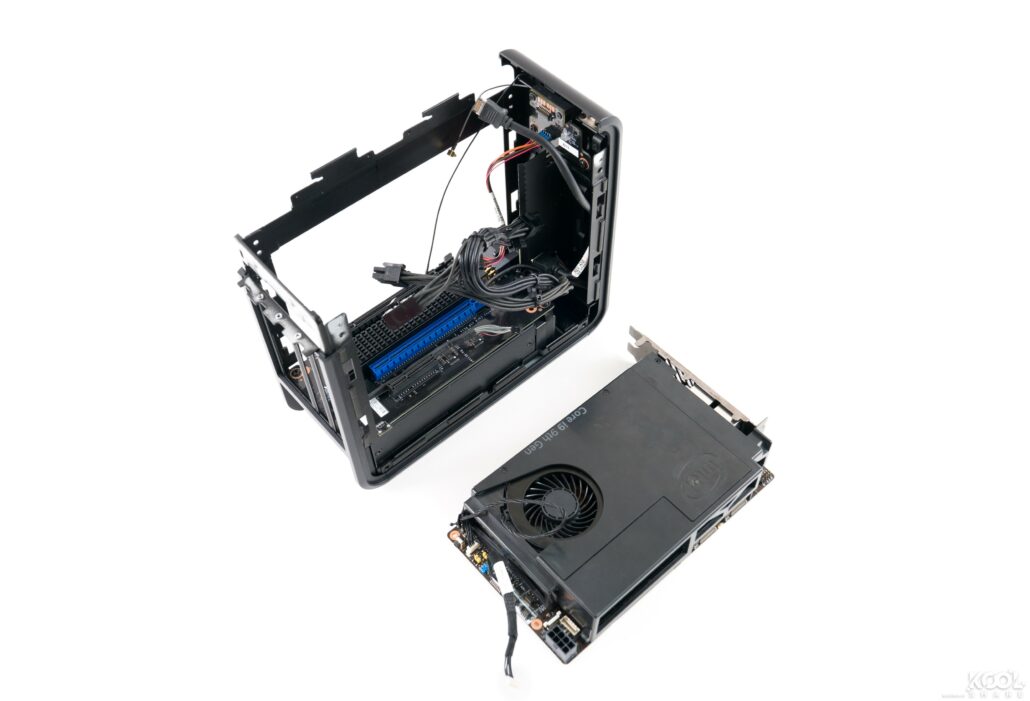 Once you have removed the Element PC board the barebones structure of the Ghost Canyon NUC finally becomes clear. The baseboard essentially consists of two PCIe expansion slots (one of which hosts the Intel Element PC card) along with an x4 slot. Since the Element card takes up only one 8 pin connector, that leaves roughly 1 more 8 pin connector worth of juice for a dedicated GPU (depending on the beefiness of the power supply). It does mean that the 500W power brick that Intel supplies the NUC with is overengineered to anything since I cannot imagine the PC using that much power even with an RTX 2060. 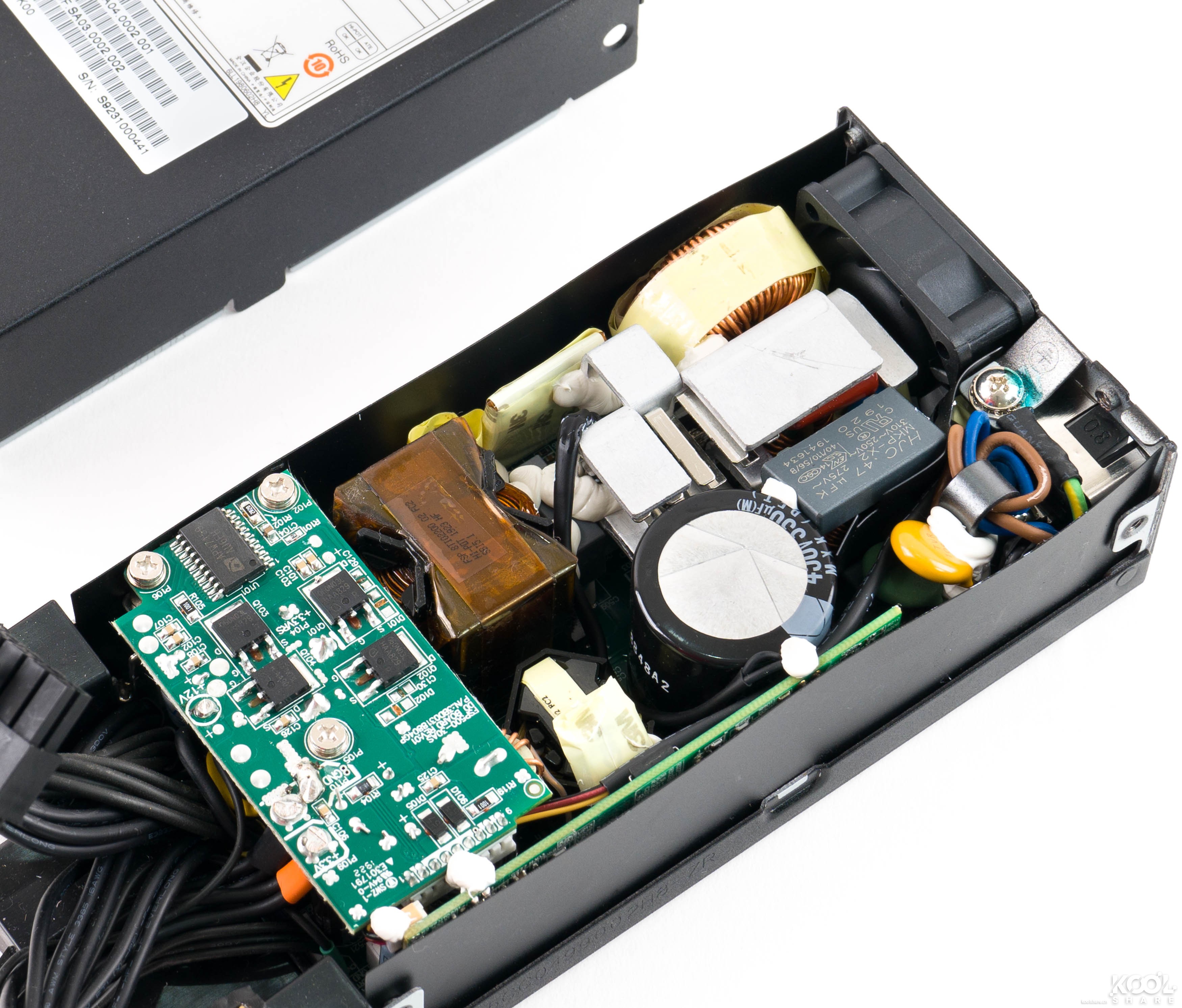 Speaking of the power brick - this is an FSP design capable of supplying 500W of power to the system. Needless to say, this bad boy should be able to manage just about any kind of dGPU (that can fit in that space) pretty easily. Another potential reason for overengineering the power brick is that if the brick is running close to its capacity internal temperatures will quickly skyrocket. On the other hand, if Intel expects the average power consumption with a dGPU to be 250W for eg, then a 500W PSU running at half capacity should keep plenty cool.

Okay, let's take a look at the Element PC board itself. After removing the blower-style fan, you are met with a sight enthusiasts should be pretty familiar with. Evaporative vapor chambers that cool the CPU as well as the chipset. The CPU shown here is the Core i9 9980 HK with a 45W TDP and an integrated HD 630 GPU. The CPU uses a 3+2+1 phase power supply. The network card is soldered to the motherboard and a Realtek ALC256 acts as the onboard sound system.

The reviewer used 16GB DDR4 3000 MHz memory as well as an Optane SSD to conduct the following benchmarks. The SSD and RAM were fitted into the Element PC card as shown. The CPU is able to maintain an all core Turbo of 4GHz juding from the CPUZ attached. The iGPU is able to play 8K youtube videos at 60 fps. Here are all the benchmarks:

I will be honest, the benchmark score of the Cinebench R20 run blew me away. This is desktop level performance in what is essentially a very tiny package. 3187 is absolutely nothing to sneeze at and a singel core score of 484 is stellar as well. The CPU scores 1554 points in the older Cinebench R15 benchmark. The IO and read write performance are great as well although those are heavily dependant on the type of SSD you use and not really worth discussing. The one major takeaway from this run is that while this is a mobile PC in form factor, it is not a mobile PC in power - this level of no compromise power is something we have very rarely seen before.

Finally, the reviewer put in a full-fledged RTX 2060 and took that for a test run. The power brick was able to handle the MSI Aero RTX 2060 pretty easily and this tiny PC was able to achieve a score of 3446 in Time Spy Extreme and 8553 points in Fire Strike Extreme. This is nothing to sneeze at, in fact, this level of performance can easily handle 1080p gaming across pretty much all titles. Games like Assasins Creed Odyssey and Shadow of the Tomb Raider.

The NUC consumes around 140W with no graphics card (at full load) and around 222.4W with the graphics card at full load. These are great numbers and explain exactly why Intel went with a 500W PSU design. 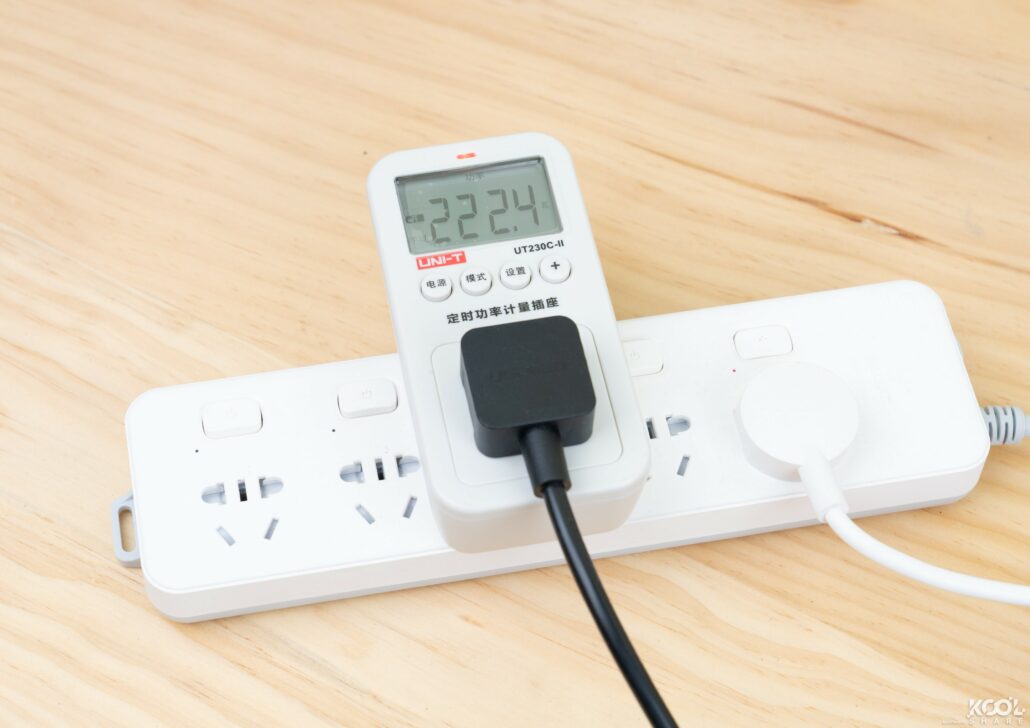