Intel's SIGGRAPH 2019 event, dubbed "Intel Create", had some pretty interesting nuggets for those waiting to see how Intel's new master plan will play out. The software side is something that is usually neglected in a hardware-first company like Intel but the Create event marks the first instance of them delivering on the promises made all those months back. Not only did Intel unveil brand new kernels for high-performance ray tracing (sorry folks, this one is not for gamers just yet) but also rolled out a full-fledged roadmap for the rest of the year - which includes an open-source ray tracing engine. 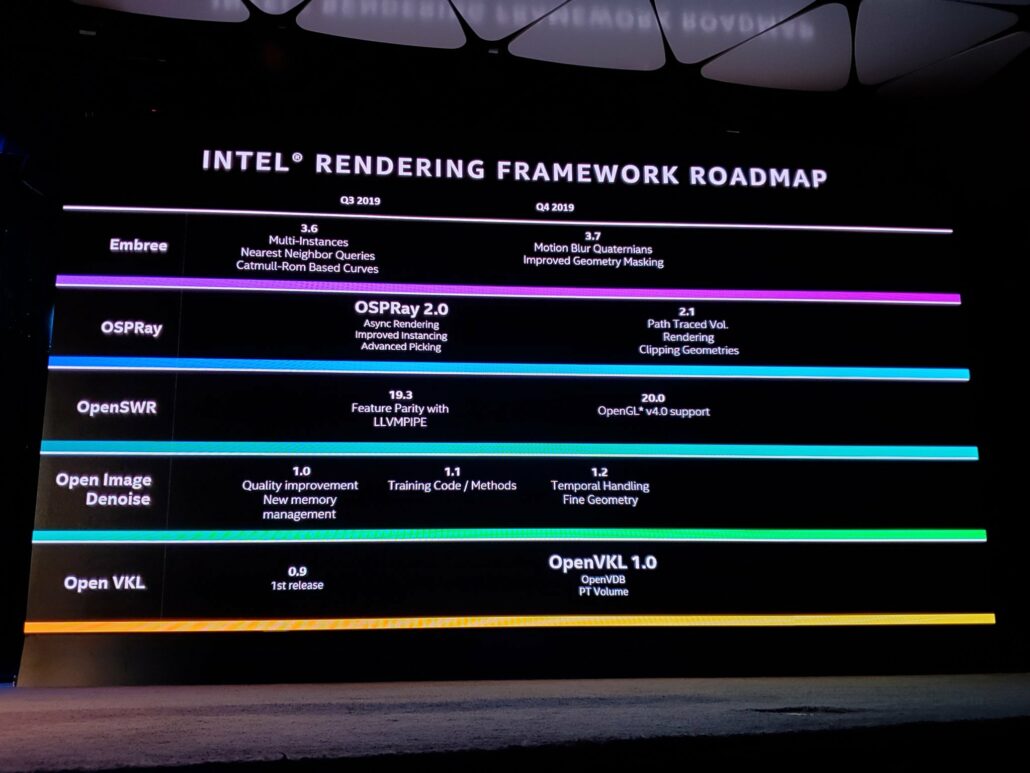 “The path to exascale computing and content creation have strong interdependencies and opportunities between them. The advancements we make in these areas can be readily shared across both domains to their mutual benefit,” said Jim Jeffers, senior principle engineer and senior director of Intel’s Advanced Rendering and Visualization team. “Our investment in software initiatives like oneAPI, plus advanced algorithm research and development, plays a profound role as we set out to ‘leave no transistor behind’.”

The company's six technology pillars and OneAPI initiative is something that pretty much all tech heads have heard of by now but this event was dedicated to the creators and it showed. Intel already has a good hold of Hollywood thanks to its Xeon ecosystem (as of a few years ago, no one would have even thought about doing raytracing for any professional project on a GPU) but moved forward to announce a wide variety of software tools that will help accelerate workflow to meet its highly ambitious (and a bit vaguely worded I might add) 1000x performance advancement goal in the "next few years".

Intel rolled out a brand new version of its high-performance ray tracing kernel (Embree 3.6) as well as a new Open Image denoising tool. Considering deep learning/accelerated ray tracers usually work really fast by compromising a bit of quality (which in the ray-tracing world is usually noise), you need a good denoiser to provide the patch-up job for a clean output. Both tools are complementary to each other and it is really great to see Intel taking the open-source movement seriously. In fact, they are planning to release an open-source ray tracing engine, the OSPRay 2.0, next quarter along with the anxiously anticipated OneAPI.

OSPRay 2.0's first iteration will have features such as asynchronous rendering (such a fun word, if you know what I mean; I am looking at you AMD fans) while the final iteration will include full path traced volumetric lighting and rendering support (exp. Q4 2019).

Intel's partners also took the stage to highlight collaborations for its existing and upcoming software stack. This included Pixar, which talked about its collaboration with Intel to allow Renderman to enable 2x acceleration of the Open Shading Language by Intel Xeon processors (using AVX 512) as well as announced its intention to utilize and extend R&D for Renderman to the upcoming Intel Xe GPU architecture.

Maxon revealed that it is using Intel Embree and Open Image Denoise in Cinema 4D R21 to deliver faster rendering times and announced a technical partnership for future CPU and GPU technology.

All in all, things are starting to look pretty well-defined for Intel's software ambitions.

Jim Keller and Raja Koduri also talked about the pace of the industry and how it has evolved over the years. Moore's Law (a law created by a former Intel CEO) was discussed and while different analysts would give you different answers on whether it is still alive and kicking, Intel believes that the spirit of the law is very much still in effect (AMD fans will get a kick out of the fact that the slide they were showing ends at 2017). How? This is where Bell's Law was brought up and discussion on how the form of computing changes roughly after every 10 years or so ensued (it will be interesting to see whether this law holds going forward without getting itself stuck in semantics).

Finally, Intel coined a new law: Raja's Law. Raja's law is a statement by Intel's Raja Koduri that the major macroarchitecture type changes roughly every 20 or so years (the exact time frame shrinks with every iteration as technology advancement speeds up). The examples used to illustrate this point were that initially, the overarching architecture was a single-core CPU which moved on to multi-core CPUs. We are currently in the GPU era and looking into the discrete AI era.