For reasons unbeknownst to me, Ashes of the Singularity benchmark remains a popular prototype benchmarking tool for testers all around the world. Fortunately for us, this means we can take a look at the performance of CPUs and GPUs before they are actually released. While the sneak peeks definitely help, it is also useful to keep in mind that most of these benchmarks are done on engineering samples and/or with preliminary drivers & bios - so should always be taken with a grain of salt as they may not be indicative of final performance.

For Intel's upcoming Core i9-9900K CPU, TUMAPISAK - a well-known leaker, decided to let out some hidden benchmarks from the AoTs metaverse. I was not able to find these in the public directory so they have either been removed or were never in the public directory, to begin with (there are ways to crawl benchmarks that have not been publicly posted). The benchmarks pit the Core i9-9900k against the last generation mainstream flagship - the Core i7-8700k. 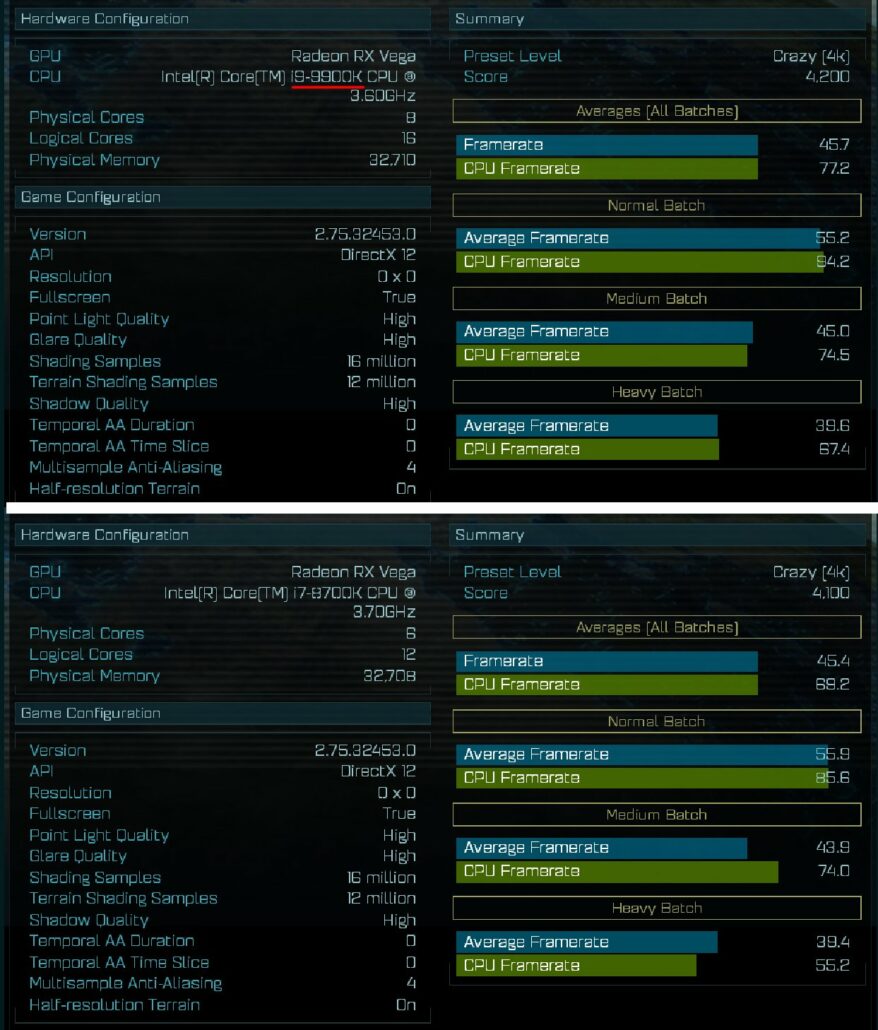 It's important to mention here that to gauge the actual CPU performance difference you should be looking at the "CPU framerate" and not the generic framerate. The former is a better indicator of performance differences while the latter is what you can usually realistically expect in real life gaming scenarios (in which even an 8400 would suffice for most AAA games). The preset used is the Crazy 4k preset which is not exactly ideal since it will make the GPU the bottleneck (the lower the resolution, the easier it is for the GPU to churn out frames and the harder it gets for the CPU to catch up) but thankfully we have CPU framerates to make a good comparison.

The Core i9-9900k is the flagship part of Intel's upcoming 9th generation lineup and will feature 8 cores with hyperthreading enabled (8 cores / 16 threads). The real fun comparison will be between the core i9-9900k and the Core i7-9700K which also has 8 cores but with no hyperthreading (8 cores / 8 threads). Supposedly the Core i9-9900k can boost to an absolutely massive 5 GHz clock on air when dealing with single core/dual core turbos and up to 4.7GHz on all 8 cores. All 9th generation parts are fabbed on the 14nm++ process and MSRP has already leaked out.