Intel has launched their latest Cherry Trail family, featuring the next generation 14nm core architecture at the Mobile World Congress 2015. The new processors will be part of the Atom lineup which consists of three tiers that include the top Atom x7 based Z8700 series, Atom x5 based Z8500 and Z8300 series while the Atom x3 family will be featured inside the SoFIA powered C3000 series line of Intel Atom chips.

The lineup seems fit for MWC since the new Atom processors will be powering a range of mobility platforms. The fully integrated SOCs will have four tiers, the first ULC tier will consist of smart phone devices featuring 3G connectivity (integrated modem) and will have a price point below $75 US. The next entry-level tier of devices will feature both LTE and 3GR connectivity (Integrated modem) and will hit a price point starting from $75 up to $149 US. Both tiers feature the Atom x3 SOCs and moving up, we get to see the Atom x5 and Atom x7 based SOCs in actions.

Do note that Atom x5 and Atom x7 feature the 14nm Airmont cores which will be detailed in a bit. The Value segment is handled by Atom x5 featuring WiFi capabilities (No modem) in tablets at a price range of $150 US to $249 US. The mid-tier is handled by a range of Atom x5 and Atom x7 chips featuring discrete modem unlike the integrated ones on SoFIA based Atom x3.. These devices will be featured inside 2in1's and more powerful tablets and notebooks with price ranging from $250 to $349 US. The performance tier above that which starts from $350+ is handled by Intel's Core M processors which as we know is based on the 14nm Broadwell-Y SOC. So let's start with Intel's Atom x7 and Atom x5 "Cherry Trail" based processors.

The new branding schemes for Atom SOCs makes it easier for users to identify the specific tier of the devices in terms of price and performance. The Atom x3 powered C3000 series are aimed at the entry and value market, the Atom x5 based Z8500 and Z8300 series are aimed at the mainstream audiences while the Atom x7 which is the fastest Z8700 series of the line will be fused inside the performance oriented Atom devices. Intel has given a more simplified approach to their branding schemes on this front since the Atom line is much more focused.

Intel's Atom x7 and Atom x5 SOCs will be part of the Cherry Trail family that incorporate the 14nm x86 Airmont core architecture. These chips will feature the 64-bit CPUs and 8th Generation graphics processors (12-16 EUs) along with discrete level modems  for next generation LTE capabilities (Intel XMM 726x supporting Cat-6 and carrier). The platforms based on these chips will have support for Windows and Android OS, feature RealSense, True Key, Wi-Di tech support to enhance user interface and come along a price tag starting from $119 (7" Tablets) up to $499 (10.1" 2 in 1s).

In terms of performance, an Atom x7-8700 processor clocked at 2.4 GHz and coupled with 4 GB of LPDDR3 ram at 1600 MHz is 2 times faster in GFXbench 2.7 T-Rex HD and 50% faster in 3DMark Ice Storm Unlimited when compared to a Atom Z3795 (Bay-Trail T) clocked at 1.59 GHz with 4 GB of LPDDR3 ram at 1600 MHz. Further support for new DirectX 12 and OpenGL APIs pushes performance leverage in games utilizing the new lower overhead APIs. Intel is expected to out several Atom x5 and Atom x7 based products by 1H of 2015 with eco system support from ASUS, ACER, Lenovo, DELL, Toshiba and HP.

Intel will also fuse their latest XMM 7360 modem featuring LTE-A support. This 3rd generation discrete LTE modem chip will allow 450 Mbps downlink, 3x carrier aggregation and will be available in commercial devices by 2H of 2015. The modem has support for 29 LTE brands, features a compact size with dual/single transceiver options, comes with LTE Broadcast, Voice over LTE, Dual-SIM capabilities and has higher quality while reducing power levels from past generation discrete modems. 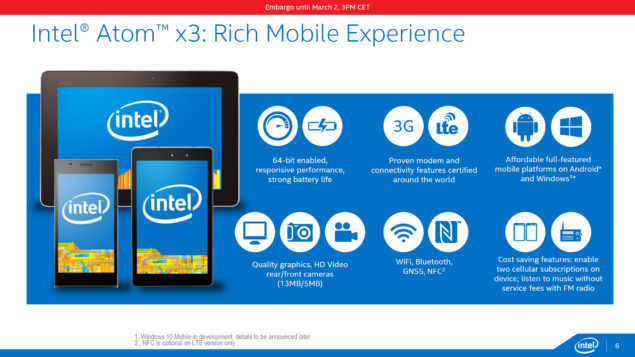 Next up, we have the Atom x3 C3000 series SOCs which are aimed at the entry and value markets. The main feature of the Atom x3 is that its the first integrated Comms SOC that incorporates both an Atom processor and modem on the same chip. This chip is designed for smartphones, tablets, phablets and will comes in 3G, 4G and 4G LTE variants. A more commonly known name for this chip is SoFIA, the same chip that was presented at IDF last year and was made through a strategic partnership between Rockchip and Intel. To sum it up, SoFIA is a fully integrated SOC with a built-in modem that comes with 64-bit CPU architecture, 3G and LTE support, both Windows and Android OS support and has a relatively low production cost.

Next up, we have the SoFIA 3GR (Atom x3-C3230RK) chip that is a quad core design with a core clock of 1.2 GHz featuring the Mali 450 MP4 graphics chip. The chip also supports GSM/GPRS/EDGE/HSPA+/DSDS/DvP, WiFi, Bluetooth, GNSS capabilities while supporting either LPDDR2/3 (single channel) or DDR3/DDR3L (dual channel) memory. Storage is allowed by eMMC 4.51.

Last up, we have the SoFIA LTE (Atom x3-C3440) which is also a quad core design with a faster core clock of 1.4 GHz and the Mali T720 MP2 graphics core. There is support for GSM/GPRS/EDGE/HSPA+/TD-SCDMA, FDD/TDD LTE Cat 4 to Cat 6, WiFi, Bluetooth, GNSS capabilities. The chip can support a single channel LPDDR2/LPDDR3 memory and storage is allowed by the eMMC 4.51.

In terms of performance, the SoFIA 3G-R and SoFIA LTE show relatively good performance gains as estimated by Intel in benchmarks against Qualcomm, Mediatek and Spreadtrum made chips. The benchmarks can be seen in detail below: