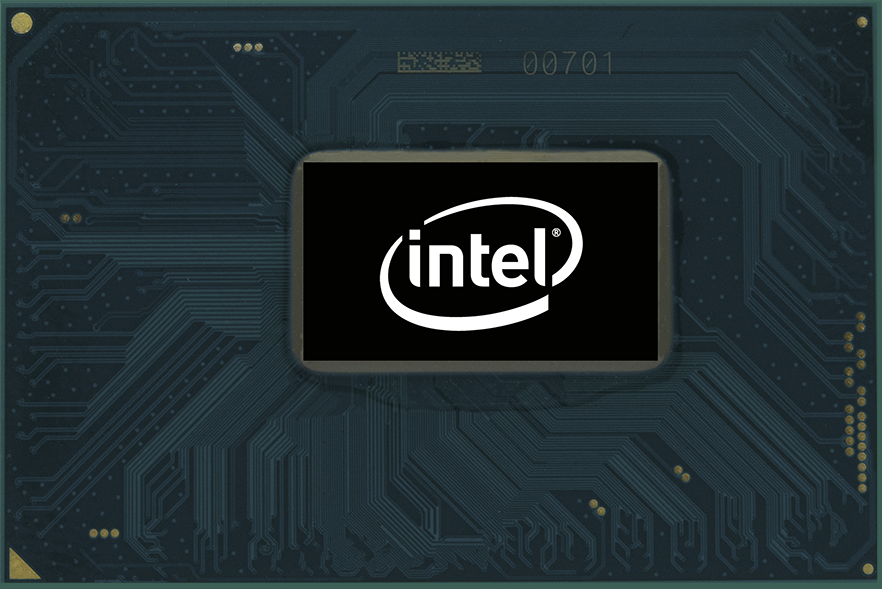 Intel has officially launched their 8th gen high-performance notebook processors. The latest series aims to take the performance bar even higher for Intel in the mobility space with higher cores, faster clocks and a feature rich platform designed around fast storage and memory solutions.

Today is the day when we finally get to see what Intel has been cooking secretly for the notebook market. Over the last couple of years, Intel's mainstream and mobile lineup was stuck with 4 cores and 8 threads in flagship part. This changed with the 8th generation family which brought a core bump to the desktop lineup last year. Now, Intel is bringing the same core bump over to the high-performance notebook sector which has become a slightly heated space due to the resurgence of AMD and their mainstream Ryzen processors.

Today's announcement is a full fledged lineup which is part of the Intel Coffee Lake-H family. These products not only include the Core series processors but Intel's Xeon class workstation chips are also launching today. The notebook Core lineup tackles various market segments such as Enthusiast Gaming, Content Creation, VR/MR, Mega-Tasking, Data Analysis, Business on the Go and work station tasks. Some key features of the Coffee Lake-H lineup include: 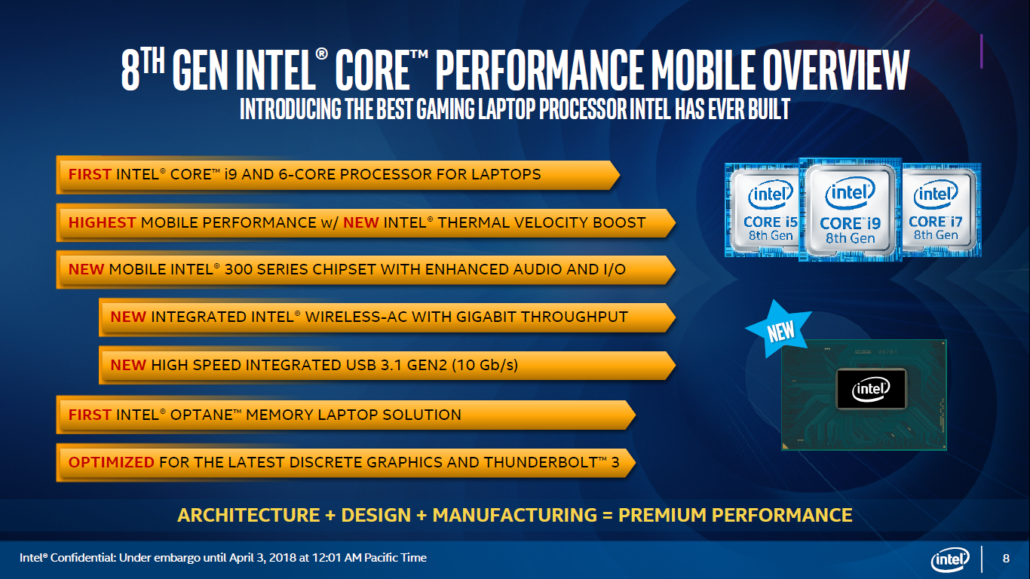 The Intel Thermal Velocity Boost feature is supported by the Intel Core i9-8950HK and Xeon E-2186M processors. It is designed to increase performance of both, multi-threaded and single-threaded workloads. The maximum core frequency is achieved while the processors is at a temperature of 50C or lower and turbo power budget is available. Frequencies are expected to reduce over time as the processor temperature increases. 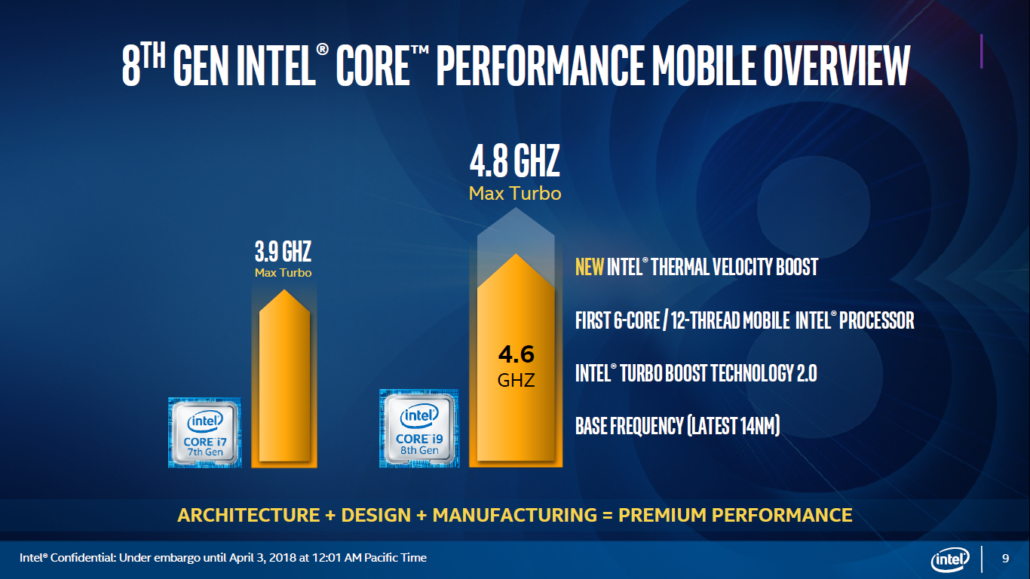 Coming to the lineup, the 8th generation Coffee Lake-H family has a total of seven processors. Two of these are Xeon models while the rest are Core models. All of the processors are based on the 14nm++ process node and feature support for Intel Optane memory while the new 300-series chipset also adds integrated Giga bit Wi-Fi which is capable of being up to 2 times faster than standard wireless LAN connections.

The flagship SKU of Intel's Coffee Lake-H lineup is the the Core i9-8950HK which is a 6 core part with 12 threads. This chip features 12 MB of L3 cache and is geared to run up to 4.8 GHz clock on a single core while all core boost will be set at 4.3 GHz, base clock will be set at 2.90 GHz. The chip comes with a fully unlocked design and will scale well with notebooks featuring good cooling systems if Thermal Velocity Boost feature is to be taken into account. 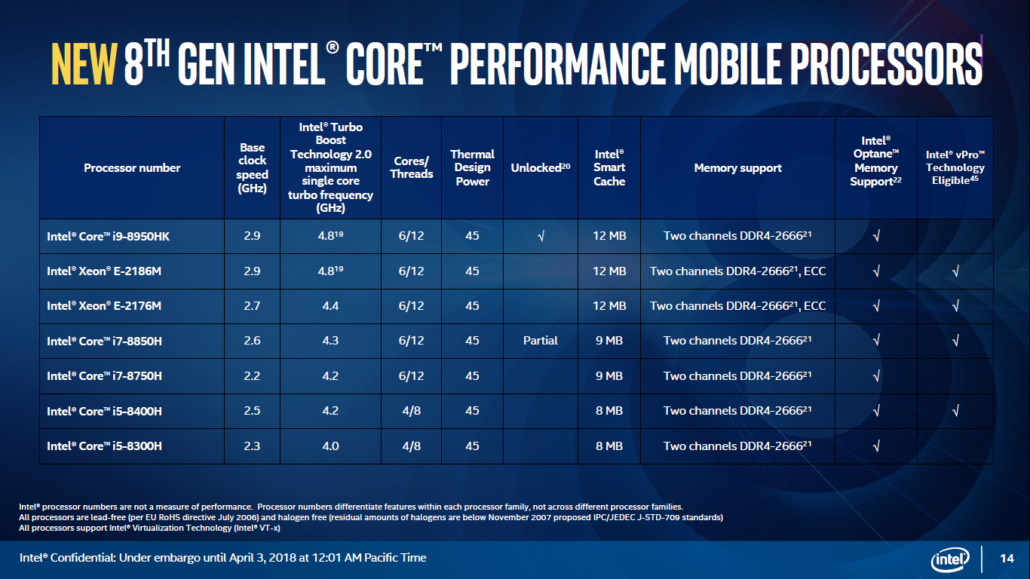 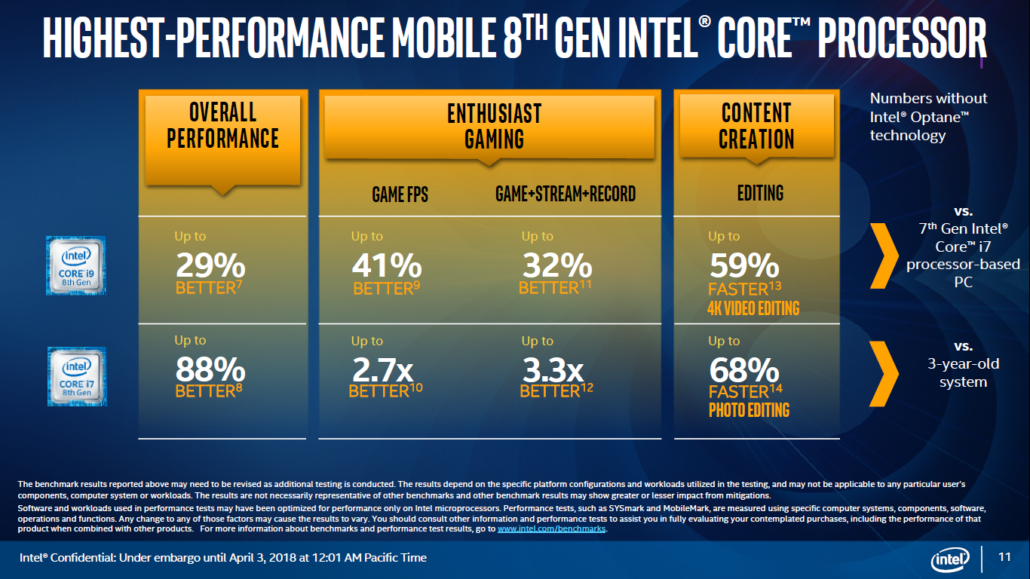 When it comes to performance numbers, Intel is saying a 29% overall performance boost for the Core i9 compared to a 7th Gen Core i7 H-series flagship chip. It's also up to 41% better in gaming performance and game streaming performance is said to be 32% better. Content creation which benefits from increased core count will yield up to 59% better results during 4K video editing. The core bump for notebook platforms has been long awaited and we finally have some capable performance tier mobile solutions in the market.