Check Out Horizon Zero Dawn, The Witcher 3, FFXV Running in 8K@30FPS on the NVIDIA GeForce RTX 3090 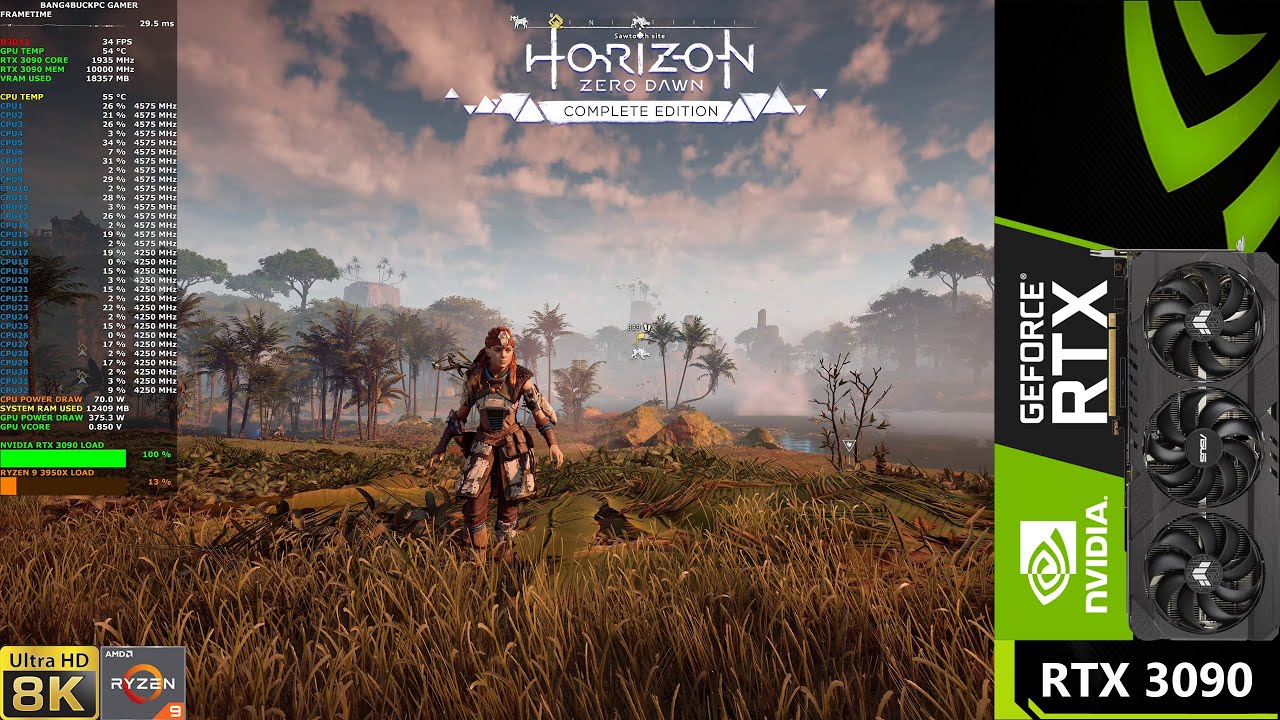 A lot of gamers are still making the transition to 4K gaming, but some new footage has now surfaced, showing off Horizon Zero Dawn, The Witcher 3, FFXV, and Crysis 3 running in 8K resolution on NVIDIA’s GeForce RTX 3090 GPU.

As expected, being able to render in 8K resolution requires quite some graphical horsepower, with the NVIDIA GeForce RTX 3090 being the world’s first viable 8K gaming GPU. So how will modern-day PC titles, including Guerrilla’s Games Horizon Zero Dawn, CD Projekt Red’s, The Witcher 3: Wild Hunt, Final Fantasy XV, and Crytek’s Crysis 3 (albeit somewhat older already), look and perform on NVIDIA’s 8K graphics card? YouTube channel ‘Bang4BuckPC Gamer’ has uploaded some new videos showing off just that. We’ve included the monstrous setup used for recording these videos down below.

In general, we can see framerates around 30FPS on High/Ultra settings for the titles mentioned above, although there were some dips below 30FPS in Horizon Zero Dawn. The RTX 3090 runs 2015’s The Witcher 3 in 8K on Ultra settings with framerates around 40FPS. Final Fantasy XV manages to hit 35fps to 40FPS on NVIDIA’s 8K GPU with DLSS enabled, while Crysis 3 runs at more than 40FPS on High settings

Final Fantasy XV in 8K on the NVIDIA GeForce RTX 3090

It’s quite impressive to see these titles running in 8K resolution in framerates of, at least, 30FPS with High/Ultra Settings. Would you rather game in 8K at 30FPS or do you prefer a lower resolution at higher framerates? Hit the comments.