South Korean automaker, Hyundai, is going to develop a new Android wear app that can be used to control the company’s cars through their existing smartwatch. It is expected to be shown during the Consumer Electronics Show (CES) 2015 in Las Vegas this week. Hyundai will become the second company to support such a feature in their cars which was used by Tesla first. 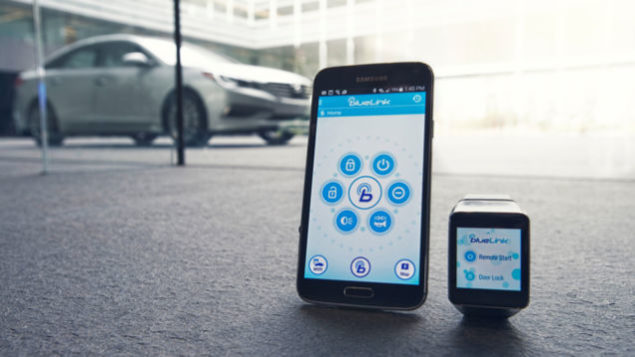 The app can be connected via Bluetooth or Internet connection

Looking back, in 2011 Hyundai developed a fully integrated multimedia navigation system called ‘Blue Link’ for the 2012 model of Hyundai’s popular Sonata. They have made a leap forwards and now Hyundai owners who also have a smartwatch will be able to use the Android wear version of the Blue Link app. With this app you now have remote access to functions in your vehicle from your wrist.

"This new app expands Hyundai's exploration into how wearable technology and Blue Link fit into a customer's lifestyle," said Barry Ratzlaff, executive director, customer connect and service business development, Hyundai Motor America. "Connecting to your car through a smartwatch and voice recognition was previously something seen only in science fiction movies.  Now, we can provide this capability to owners of Hyundai vehicles equipped with Blue Link."

The app gives drivers remote access to their vehicles and the person wearing the smartwatch simply taps an icon or uses voice commands to execute those functions. This app allows users to start and stop the engine, lock and unlock the doors, flash the headlights or honk the horn and also find their car in a crowded parking. This all can be done via voice commands by pressing the microphone button on the app and then executing commands like “Start my car”, “Unlock my car” or “Find my car.”

Some similar features to the smartwatch, the app includes a tracking system for the car too.

The Blue Link smartwatch app must be paired using Bluetooth to the owner’s smartphone that has the mobile Blue Link app. And as long as the user’s smartphone has a Bluetooth and a cellular or Internet connection these remote functions of the car can be performed from anywhere. Representatives of Hyundai will demonstrate the Blue Link app on Motorola, Sony, Samsung and LG smartwatches whereas Android users can download the app from Google Play store in the first quarter of 2015 for free.  This is not the first time the Blue Link system has been introduced in fact the first generation of Blue Link system appeared with the 2012 Sonata and then expanded through the company’s lineup in 2013. The next generation of models equipped with this system includes Hyundai’s Genesis, Azera and Sonata models.