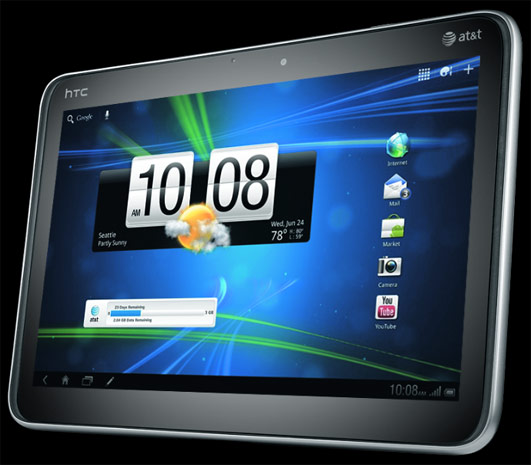 A week ago we told you that the formerly known HTC Puccini tablet will be coming to AT&T as the HTC Jetstream. Well September has started and the HTC Jetstream is now available online and on AT&t retail stores for $849 or $700 if you get it with a two year contract. As mentioned before the tablet has a 10.1" screen with a 1.5Ghz dual core Qualcomm Snapdragon processor among other things. It is AT&T's first LTE 4G capable tablet and will be running Android Honeycomb with HTC's Sense UX UI on top.

Other specs include HSPA+, Edge and GPRS support, a microSD card slot for extra storage capacity and a 7300mAH battery that should be good enough for 12 hours of usage. The tablet has a read 8MP dual flash camera and a 1.3MP front camera for video calling. Lastly it also supports HTC Scribe if you like using stylus based inputs.

The tablet is definitely top notch and the hardware is blazing fast, however we should also consider the price tag of $849 which might put off some buyers specially when the Galaxy Tab 10.1 and the iPad both start at $499. Granted the Jetstream has many enhancements especially the 4G LTE radio but even then it is a good $300 more expensive so it will be interesting to see how well it sells.