HTC hints at Half-Life as a VR game: Half-Life 3 confirmed?

Yesterday HTC unveiled their new VR Headset the HTC Vive, which is being made in collaboration with Valve. Does this mean that Half-life 3 is confirmed? No Half-Life 3 is probably not confirmed, but HTC's Chairwoman Cher Wang told BBC in an interview that she "hopes" a Half-Life game will be one of the many titles released for the HTC Vive. 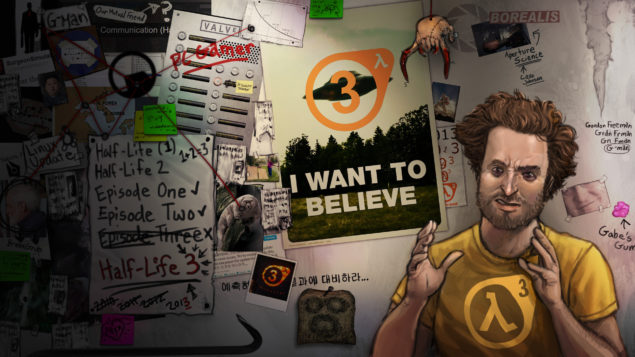 This is how Rumors start about Half-Life 3

During an interview with BBC, Ms Wang said that HTC was "co-operating with Valve on a Half-Life title", but she would not state specifics on whether that meant a new game - potentially Half-Life 3 - or a virtual-reality remake of one of the series' existing titles. The latter seems more believable to me for several reasons, amongst them is the fact that back in 2013 Valve actually distributed a "beta" version of Half-Life 2 to the Oculus Rift developers. So maybe some form of "remake" of Half-Life 2 or just a proper release of the version that got sent to the Oculus Rift devs.

Below is a transcript from the interview.

BBC: One of Valve's most famous games is the Half-life series, and I know there are millions and millions of gamers that are desperate for a new Half-life game to come out. Is the new Half-life going to be on the virtual-reality headset? Is that what Valve is going to do with this machine?

Cher Wang: I think Valve's best game is Dota, right, and Portal and [Team Fortress] and I think they are very keen to have them.

BBC: But how about Half-life - is that going to be on there?

Cher Wang: We are co-operating with Half-life, and I think... I hope, you know, it will be on it.

There's been countless of rumors for countless of years about Half-Life 3 being in development or not, and so far there's still no concrete info, so until Gaben Himself actually just comes out and tells us it's in development I'll just go about my business. I'm actually half-expecting Gaben to just one day out of the blue go : "so yeah we are releasing the Orange Box 2 with Half-Life 3, Team Fortress 3 and Left 4 Dead 3 in a month." I do kind of like the idea of running around as a crowbar wielding physicist in a VR-setting, that could be kinda interesting.

And speaking of crowbar wielding physicist's If you have time to kill, whilst waiting for Valve to reveal Half-Life 3, why not watch "Freeman's Mind" for some cheap laughs, it's pretty great and it actually got finished quite recently so there's a whole of 68 episodes out now.