How to Keep Your MacBook From Heating Up

Although MacBook Air and MacBook Pro are some of the most reliable machines around, even they have their flaws. Due to their thin profiles and aluminum bodies, MacBooks have a tendency to run hot when pushed to their limits. Here is how you can restrict your MacBook from heating up with a few simple tips.

The first step is to check your software. Although it might sound crazy, but Chrome and Firefox can heat up a MacBook easily, specially if you watch videos which are not hardware accelerated, like VP9 on YouTube. Even using complex Javascript apps can sometimes get the fans going. So before you move on to the next steps, check Activity Monitor to see which app is using up CPU cycles and try to diagnose the misbehaving app or extension, or find a suitable alternative, such as Safari for watching YouTube videos. It is not an ideal solution as YouTube does not support 4K video in Safari, but it is a workaround.

Apple Music Sing Lets You Sing Along to Millions of Songs

Once you have exhausted all your options, here is the workaround that you can implement: disable Intel's Turbo Boost when your MacBook gets hot. Since macOS does not have any such option built-in (you can limit processor usage in Windows via power options), here is an app that we have tried and tested ourselves which lets you automatically switch Turbo Boost on and off. Disabling Turbo Boost to cool down your MacBook also has a positive impact on your machine's battery life.

Turbo Boost Switcher is a free app, with a paid Pro version, which lets you monitor your MacBook's temperature and fan speed, and enable/disable Turbo Boost as required. The paid version of the app is what we will take a look at here, because it lets you set up an auto mode, so everything happens automatically in the background.

With its Auto Mode, the app lets you set limits based on either fan speed, battery or by applications, so that when the threshold is reached, Turbo Boost will be disabled. It will automatically enable when the fan speed goes down or when the battery charge reaches a certain level, as per your defined limits.

My preferred method is to set the auto mode to kick in when my 13-inch MacBook Pro gets hot enough for the fans to become noisy. That's also when my hands become sweaty when using the keyboard.

If you have no problem with sweaty hands like me because of a hot MacBook, you can get additional battery life by disabling Turbo Boost when the charge level reaches a certain value. This will work similarly to the power plan in Windows laptops. 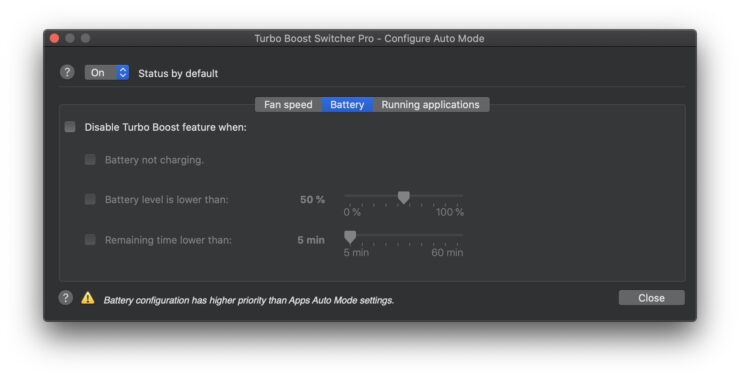 For apps, if you wish to disable Turbo Boost for a specific app when it is in use, you can also setup such a configuration. 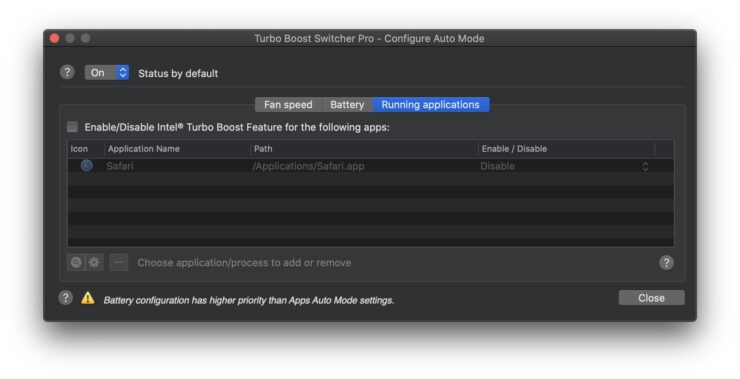 For now, the app does not let you set auto mode based on temperature. The developer is working on this feature for a future update, which would be my preferred configuration for auto mode.

The Pro version of the app costs $10, and if you have a problem with an overheating MacBook, this is worth the money. You can always give the free version a try before spending money on it.