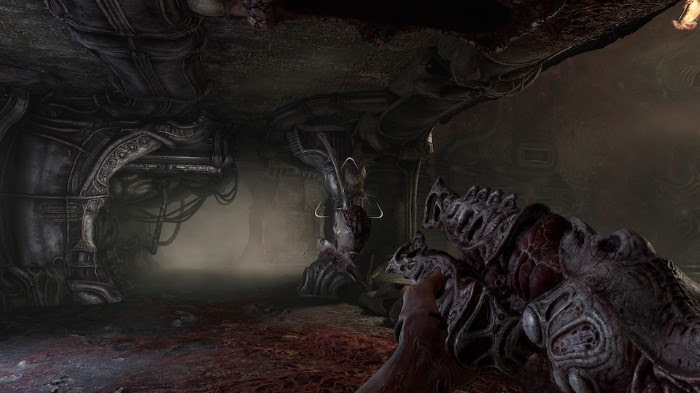 Over a year ago, Ebb Software announced Scorn, a promising first person horror shooter which is supposed to release in two different parts on PC in the future. Today, the team announced a new Kickstarter campaign to complete development.

By supporting the development of the game through the Kickstarter campaign, players will also receive a playable demo, which will be made available to backers from September 22nd. A new gameplay video showcasing content from the demo has been released, and you can check it out below.

Scorn will come with plenty of interesting features that will set it apart from similar games.

-Cohesive “lived in” world – Scorn takes place in an open-ended world with different interconnected regions. Each region is a maze like structure with various rooms and paths to discover .All the storytelling happens in-game, with no cut-scenes to distract you from the grisly reality of the living, breathing world you’re in. But keep your eyes open – the game won’t show you any sympathy if you miss something important on your uneasy travels. Everything has a reason and purpose – you just need to work out what it is.

-Full body awareness – player will experience better immersion being aware of the character’s body and movement. Interaction with the world is realistic – objects are picked up with your hands (instead of just floating in midair), machines and instruments are operated by grabbing the controls etc.

-Inventory and ammo management – is defined and limited. It plays a big role in keeping the player in an even greater state of awareness throughout the whole game. Players will have to think about when to fight and when to take cover and how their actions affect the world around them. Different play styles will be needed to advance.