Square Enix officially revealed their upcoming title "Hitman" at E3 conference which took place about 3 weeks back but they did not release much details about the game back then. That cure has been allotted to the aplha gamers nowadays as the games official closed alpha is underway and thanks to the gamers testing Hitman, we're getting all sorts of news about the games including screenshots and gifs.

What we know for now is that the title "Hitman" will release in a way similar to Early Access games as it will be available digitally  (starting from December 8, 2015 on PC, PlayStation 4 and Xbox One) with the aim to add DLCs, missions, contracts and the likes continuously throughout 2016 and beyond. 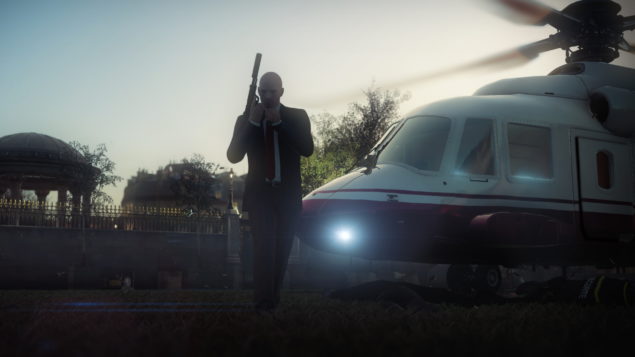 More Information on Hitman Thanks to Alpha Leaks

Some of the Alpha gamers have revealed information about the game online. Some of the users are ones who took part in a Hitman related survey. Taking on to forum like Reddit, a gamer with access to the games Alpha version of the game, shared his first impression on Hitman which you can ready as follows.

You must have a 360 controller to play it. So far I’m really enjoying! I find it to be closer to blood money than it is to absolution so far. It also appears to be quite a fairly taxing game on the hardware… 2x gtx 660 ( doesnt not support sli yet). Uniforms play a much more important role in this game, at least in this mission.
Many path choices:
-front entrance
-climbing poles outside the building
-climb outside a window and jump from window to window hanging from a ledge
-go through the back underground staircases
-garages
-scaffolding and more
Interactive Environments (firework displays, fire alarms, tampering with objects (breaking/loosening….etc) (multiple choices to tampering and it also requires tools to tamper with, such as screwdriver,wrench…) poisoning food, hiding weapons in crates of food) and more.
Loadouts are back (choose your suit, sideweapon, specials(poisons[lethal,non-lethal..]/bombs), suitcase weapon…
Side missions can make your mission easier; disable the small stock exchange meeting, take somebody out so a main target has to take their place….
The game also doesn’t have that feeling absolution had that made it feel like a very linear game, just with a couple of paths to get to the end.
Overall a very solid game so far! Just playing this Alpha has added it to my games list this year among Fallout 4, and Deus Ex: MD which both happen to be in my top 5 favourite games if that says anything.

Screenshots and and gifs of Hitman have also made their way onto the internet. You can check them out below.

You can also check out this cool video where Hitman subdues a target.

Well, that's all we have on Hitman for now. Stay tuned for more news and releases on Hitman and do share your views with us in the comments section.