The HDMI Licensing administration openly confirmed with website TFT Central that it has no issues with display manufacturers labeling their own HDMI 2.0 monitors as "HDMI 2.1" displays. The only thing the administration cares is that the company selling the falsified HDMI 2.1 display list the features enabled on each model.

Since the release of HDMI 2.1, all of the specifications from HDMI 2.0 have been transferred to the new standard for HDMI. This is due to the backward compatibility of the HDMI 2.1 technology with previous generations of displays. However, the issue is the HDMI licensing organization states that HDMI 2.1 features are completely optional and it is in the hands of display manufacturers to specify what features are being supported on their product. In other words, pretty much all the features after the HDMI 2.0 spec are optional. This can become a huge problem, because consumers looking for an HDMI 2.1 monitor will now have to do a proper investigation themselves to find out whether the product they are purchasing is truly what they are getting.

To break everything down further, TFT Central offers a summary of the statement from the HDMI Licensing Administrator, Inc. representative.

1) HDMI 2.0 no longer exists, and devices should not claim compliance to v2.0 as it is not referenced any more

3) All the new capabilities and features associated with HDMI 2.1 are optional (this includes FRL, the higher bandwidths, VRR, ALLM and everything else)

4) If a device claims compliance to 2.1 then they need to also state which features the device supports so there is “no confusion”

— A summary of HDMI Licensing Administrator statement to TFT Central

There have already been issues that have arisen with this decision. Xiaomi released a 24.5-inch monitor with a 240Hz display in Chinese markets. Xiaomi ensured that they did not use the terminology HDMI 2.1 in their marketing but when looking at the specifications of the product, the HDMI 2.1 label can be seen. It is then quickly followed by an asterisk, signaling to look further down in the footnotes to find out what the asterisk means. Should one do this, they will find that Xaomi's new monitor only supports the TMDS signaling protocols but does not support Fixed Rate Link (FRL). In other words, it is on the HDMI 2.0 spec with 18 Gbps of data rate instead of the 48 Gbps HDMI 2.1 spec. 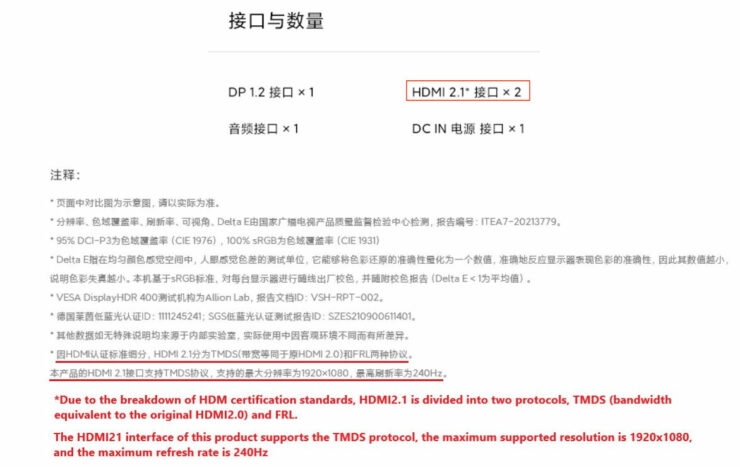 Below is a screenshot from the HDMI Licensing Administration, Inc. on what is the feature names along with their subsequent acronyms used. 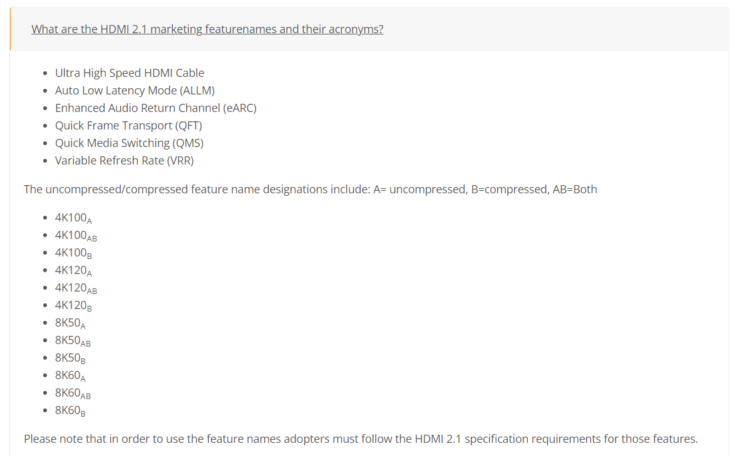 This can be a serious problem for consumers due to this ruling by the administrative organization. With them openly admitting that HDMI 2.0 is no longer to be used and any company can now label their monitors with HDMI 2.1 branding, consumers will need, essentially, a sheet with them showing the differences between the two technologies, which we have provided below. 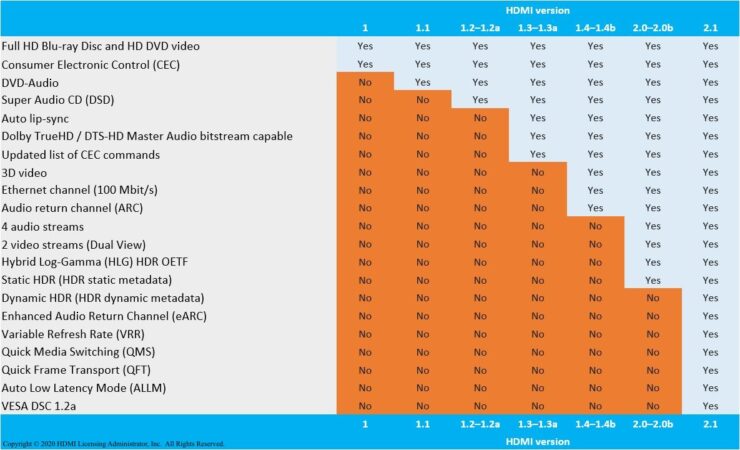 TFT Central does go into this subject more extensively in their report, including suggestions for manufacturers on how to make this clearer for consumers. There also have not been several reports of display manufacturers selling falsified HDMI 2.1 monitors to their client base. It is hard to determine whether the risk of manufacturers mislabeling their products to make a larger profit. It is also unclear if the HDMI Administrative Organization, Inc. will make a change in policy as to not confuse consumers who are looking for a new display.