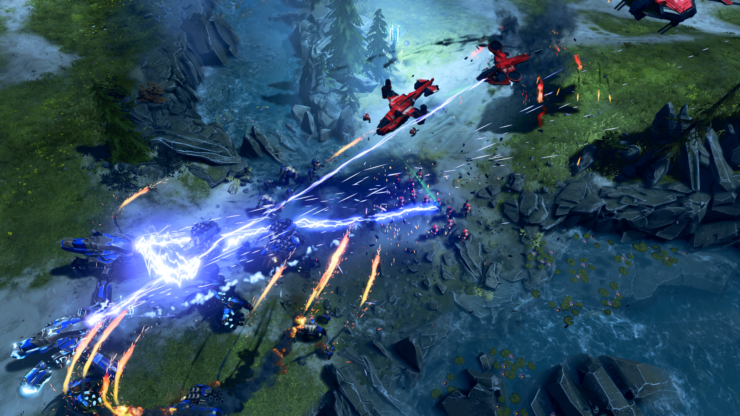 Microsoft has released a set of new Halo Wars 2 screenshots at Gamescom 2016.

After decades adrift and declared “lost with all hands,” the brave crew of the UNSC Spirit of Fire are mysteriously awoken above an ancient Forerunner haven known as the Ark. In Halo Wars 2, Captain Cutter and his crew will face one of humanity’s most formidable threats yet: The Banished – a fierce and powerful Brute faction led by a cunning and lethal warrior known as Atriox.

Halo Wars 2 delivers real-time strategy at the speed of Halo combat. Get ready to lead armies of Spartans and other Halo fighting forces like Warthogs, Scorpions and exciting new units in a brutal war against a terrifying new enemy on the biggest Halo battlefield yet.

Halo Wars 2 will feature the biggest Halo battlefield to date, and reintroduces the Spirit of Fire to the current Halo timeline. Additionally, a new villian will be introduced – Atriox, the leader of a violent, mercenary force known as The Banished. Several multiplayer modes will included, including Skirmish, Domination, and Deathmatch.