Its almost New Year (depending on where you are) and the time is perfect for something special. I have just received confirmation from one of our most reliable sources on the configuration and performance numbers for the upcoming GTX 960. Turns out there are currently not one, not two, but three engineering samples of the 960. There is your base Geforce GTX 960 and then two different flavors of the GTX 960 Ti. And best, of all we have performance numbers for all three, courtesy of DG Lee over at IYD.KR.

GM206, Core Count and Performance Confirmed - Base GTX 960 disappoints,  Ti variants do not

The results however, are not that impressive. The GTX 770 wipes the floor with the base GTX 960; heck even the R9 280 (which costs ~$200)  manages to put the card in its place. The base 960 performs around 10% faster than the GTX 760 (stock) which is a barely acceptable margin as it is. The Ti variants are another story altogether, and this is where the going gets interesting. There are two GTX 960 Ti variants currently one with 1280 CUDA Cores and another with 1536 CUDA Cores. The performance difference is quite huge and I have a feeling that we are looking at a cut-down GM204 in the 'Ti' cards. Before we move any further here are the benchmarks: 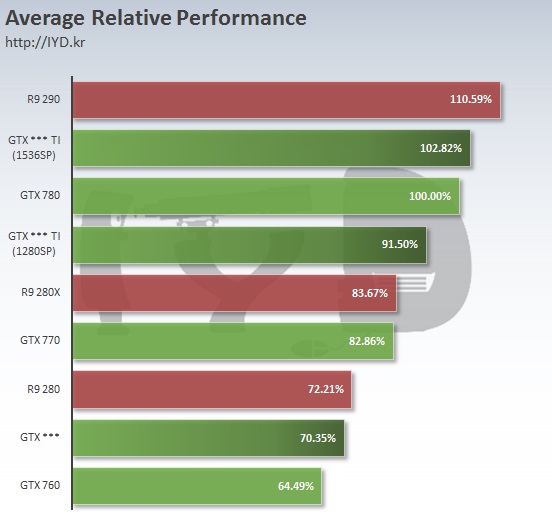 There you go folks, the first 100% confirmed benchmarks of the GTX 960 and company. As you can see, the GTX 960 is at the lower end of the chart, just above the GTX 760. The 1280 SP variant of the GTX 960 Ti fares much better, beating out the GTX 770 and the R9 280X. The 1536 SP variant of the GTX 960 on the other hand is simply brilliant. It is able to breeze past even a reference GTX 780. AMD's R9 290 is about 7.5% faster than the GTX 960 Ti but considering the higher price (above the $300 mark) the Ti offers superior value. One of the reasons why I suspect that the GTX 960 uses a different core than the Ti variants is the huge performance gap between the three. IF the base card uses a 128 bit bus then it would help explain the lackluster performance despite Maxwell's amazing compression technologies. Also, I think I can now safely say that the GTX 960 spotted at Zauba.com was a Ti variant and has a 256 bit bus and 4GB GDDR5 memory.

So to sum it all, we are looking at a GTX 960 with abysmal performance, the lower variant of the GTX 960 Ti with decent performance and an upper variant of the GTX 960 Ti with very nice performance. It is worth noting over here that there is the possibility that Nvidia will initially release only one Ti variant along with the base GPU. In my talk with DG Lee, he mentioned how he was a bit disappointed by the base variant, which frankly isn't worth buying unless Nvidia prices it very competitively or it over-clocks like heck.  Unlike its younger brother both Ti variants have decent problem and at the right price (or a little higher) they will sell like hot cakes. Based on the current pricing of competing AMD solutions, my estimates for pricing would be as follows: ~$280-$320 for the better GTX 960 Ti,  ~$250 for the 1280SP Ti and ~$200 for the base variant. The cards will be launching on 22nd of January and I expect we will find out which of the three cards, if not all, Nvidia decides to go forward with.