Stunning landscapes with refined visual detail, options that empower players to push pixels all the way up to 4K and tweak settings to get the best graphical results, first-person mode with custom field of view, and a tool that allows players to record and edit in-game gameplay footage and upload it directly to YouTube; what else do you want from an open-world action adventure game that is basically coming from the last generation of consoles? Probably, but not necessarily, support for virtual reality? So here is it, Rockstar’s GTA V in virtual reality with Oculus Rift. 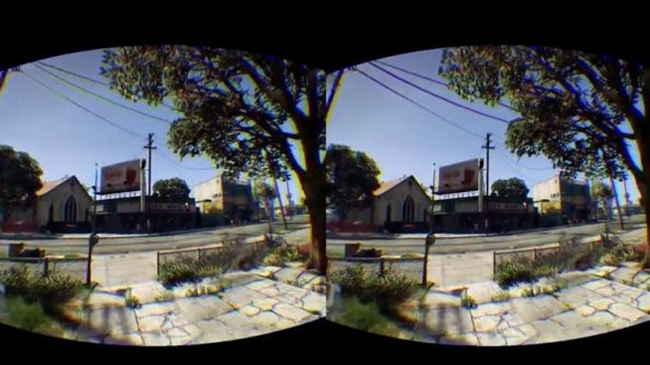 With plenty of technical and visual upgrades over the console versions, Rockstar’s open-world crime epic is finally out on PC, and is already being downloaded and played by millions of PC gamers; those who have been waiting in discomfort for around 18 months. Now, playing GTA V at maximum settings on PC does prove that to settle the score with PC gamers, the developer has put a lot of effort in creating one of the most perfect ports for PC that is also, besides first-party support, getting strong support from two of the leading hardware and graphics cards manufacturers; Nvidia and AMD.

GTA V does not boast any proper support for virtual reality at the moment (Rockstar might make it official in future), but how would the game actually look like running on a virtual reality headset? Well thanks to a bunch of modders who have managed to get GTA V to work with Oculus Rift DK 2, we have a couple of videos giving us a pretty good idea about how the in-game world of the game looks like in virtual reality.

The game is not running in perfect virtual reality, as the Oculus Rift, in this case, is only recreating the mouse/thumbstick view from the regular controls. The efforts of these modders have only enabled them to get basic VR functionality out of the game, such as using head movements to move the in-game first-person camera. The results could get unpleasant and uncomfortable for some players, as GTA V’s code has not been optimized for virtual reality.

GTA V works pretty great in virtual reality. The game surely looks great, and the level of detail and visual aspects look quite sharp, keeping the current limitations of Oculus Rift DK2 in mind. Of course, the game could attain a lot more perfection, but only if Rockstar decides to roll out official support for VR.