This 1:1 Recreation of GTA V’s Diverse In-Game World in Minecraft is Incredibly Amazing

We have seen players build some pretty amazing stuff in one of the most successful building sims in the video game history, and this latest every bit as amazing. Fans of Rockstar’s GTA V are creating the entirety of the record-breaking open world action-adventure game in Minecraft. That’s right, not a certain block or region but the entire map of the game, complete with the tall buildings of Los Santos and the mountains of Blaine County. 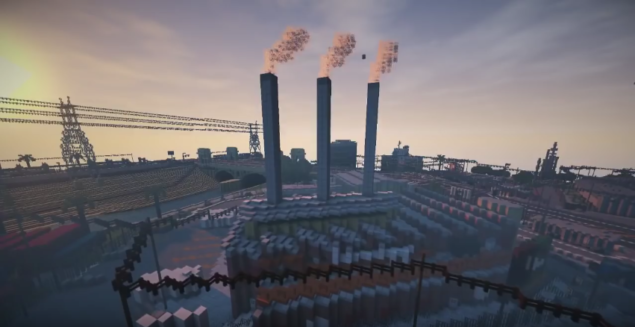 Fans are Recreating the Entire Map of GTA V in Minecraft, and its Already Taken More Than a Year

Over the years, Minecraft has seen plenty of different ambitious projects that involved fans building and recreating diverse structures and massive things like this incredibly elaborate two-million block cathedral, the Starship Enterprise, RMS Titanic, Game of Thrones’ Red Keep, and even the whole of Middle Earth. But this latest project is something that fans of one of the biggest, most dynamic and most diverse open world game ever created would certainly appreciate.

YouTuber N11ck and his team are recreating the entire map of GTA V in Minecraft. The project is simply called “GTA 5 in Minecraft,” and is still a work-in-progress. The team started building the in-game GTA V world inside of Minecraft on January 10, 2015, and has since been working on it. The map, once completed, will be on a 1 to 1 scale and will roughly be 7500 by 7500 blocks. The map will include “everything from mountains to high skyscrapers and buildings.”

N11ck regularly updates his YouTube channel with videos that show the progress being made on the project. The latest video, which you can check out here, is the 175th episode about the project’s progress. You can head over to N11ck’s YouTube page to see all the videos he has uploaded so far. The first video, which provides an overview of the entire project, has been shared below.