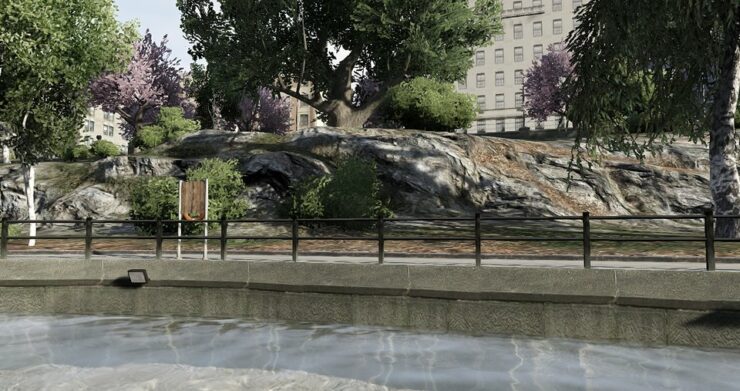 If it's on the Internet, someone will find it. That seems to be the case for GTA V Liberty City, spotted via Adrian Page's online portfolio. Page has worked at Rockstar Games since 2011 and his portfolio shows an image of Liberty City's Middle Park rendered in Grand Theft Auto V's engine.

As you can see below, it is clearly the same location players have encountered in Grand Theft Auto IV, only now it looks much better due to the new engine.

The question is, though, was there ever a GTA V Liberty City DLC in development behind the scenes? We all know that unlike GTA IV, there wasn't any single player DLC for Grand Theft Auto V, much to the dismay of countless fans.

That's because Rockstar Games has been focused on expanding GTA Online. In fact, a new update titled Further Adventures in Finance and Felony is coming on June 7th.

Further Adventures in Finance and Felony continues a player’s mission to become the ultimate criminal kingpin of Los Santos and Blaine County in one of GTA Online’s biggest and deepest updates yet.

A giant leap up the corporate ladder following the VIP experience of Executives and Other Criminals, the Finance and Felony update gives players the opportunity to expand their organization and become CEO of their own Criminal Enterprise.

Acquire a high-rise office and special warehouse properties to begin buying and selling a range of contraband across the city, all the while fighting the LSPD and the rest of the southern San Andreas criminal underworld for access to the rarest items and the biggest profits.

Further Adventures in Finance and Felony combines all new gameplay with a host of special new vehicles, exciting new features and much more.

Those interested in more single player content from Rockstar may turn a watchful eye to E3 2016, though, with all the Red Dead Redemption 2 rumors flying around.