GTA V Graphics Downgrade Results in Better FPS on PS4, But not on Xbox One – Removal of Parallax Occlusion Might be a Bug

Amid all the keen arguments about what Rockstar’s most critically acclaimed open world action-adventure title is going to look like on PC when it comes out next month, there have been reports emerging about the game getting a major downgrade in its visual presentation on the PlayStation 4 and Xbox One consoles, and according to a recent analysis, the understandable reason behind the busted visuals is that the patch 1.08 for GTA V removed the Parallax Occlusion mapping. While the graphical elements went bad on GTA V with patch 1.08, the frame-rate per second of the game on the PlayStation 4 reportedly improved massively. 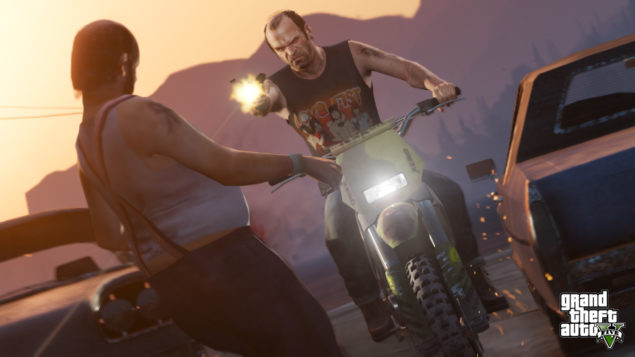 GTA V With Downgraded Visuals Offers Better Frame-Rate on PlayStation 4 - Visuals Went Bad Due to the Removal of Parallax Occlusion With Patch 1.08

Last week, GTA V received the highly awaited 1.08 update, which finally introduced Heists into the online mode of the game. However, players started reporting about noticeable downgrade in the graphical elements of the game on the latest consoles. Now of course, Rockstar took the issue into account and has already released a fix in the form of patch 1.09, but what basically caused the visual presentation of the game go bad in the first place? It seems like the good folks over at DigitalFoundry have figured out the answer to that.

In an analysis report that was published recently, DigitalFoundry claims that the patch 1.08 for GTA V cut out the Parallax Occlusion mapping, and while the new patch fixed some graphical elements of the game, such as collision physics and deformation, along with the distance pop-in, it did not bring back the certain visual effect back. However, on the Bright side, there is a massive improvement in GTA V’s frame-rate per second on the PlayStation 4. This puts the PlayStation 4 version of the game one step ahead of the Xbox One version in overall gameplay, since there is no Parallax Occlusion mapping on the Xbox One version as well, and unfortunately, there is no betterment in the FPS to be noticed. According to DigitalFoundry:

"Overall, it's a somewhat bizarre state of affairs. The smoother frame-rates on the current build of Grand Theft Auto 5 are clearly a boon for PlayStation 4 owners, with the overall performance profile of the game now shifting ahead of the Xbox One version in all areas - something that definitely wasn't the case during the game's launch period. Losing parallax occlusion mapping is a blow though, particularly if you're using the first-person perspective mode, where the effect is much more pronounced than the standard third-person viewpoint where the omission of the effect isn't so noticeable. If it is a straight trade of POM for frame-rate, we would take the smoother overall performance."

With a decent visual effect gone, PlayStation 4 owners are getting a smoother GTA V experience now, but the Xbox One owners only get a double-whammy, the Parallax Occlusion mapping is no more, and there is no improvements to the fluidity of the game as well. But since the removal of Parallax Occlusion is benefiting the Xbox One version of the game in no way, we can only assume that the visual effect has been removed due to a bug or a glitch, which the developer may straighten out in the next patch.

"The thing is, it's difficult to believe that there is a straight trade going on here, particularly when the absence of the effect on Xbox One makes no difference at all to the game's overall fluidity. We would also expect to see texture filtering quality increase with the removal of parallax occlusion mapping, perhaps with improved anisotropic filtering. However, while it's no worse than the launch code, as has been suggested, it's no better either. Our gut feeling here is that the removal of POM is a bug, and hopefully one that will be rectified in an upcoming patch."

Rockstar has already assured the GTA community that the development team is working to completely fix the graphics issue of the GTA V on the PlayStation 4 and Xbox One consoles. You can read the full analysis report by DigitalFoundry here. It includes some interesting comparison screenshots and FPS test video.