One of the most anticipated games across the gaming arena is the Grand Theft Auto (GTA) series. The GTA has, with every series the GTA has increased its fan following. One of the primary reason for that is the innovation they have introduced with each new version of the game. And currently, that innovation rests with its latest GTA V which launched on the PS3 and the Xbox 360 some year and a half ago and made its debut on the current gen console, the Xbox One and the PS4 late in 2014. What's left is the PC version of the game which has been highly waited mainly due to the constant delays and for now has a release date of 14th of April, 2015. What gamers now want to know is, why spend the extra $59.99 USD when we already have the game on consoles. Some can be found here, on the article I covered earlier about "Why GTA V PC version is the game to have" and another one I'm going to reveal right now are the improved graphics. 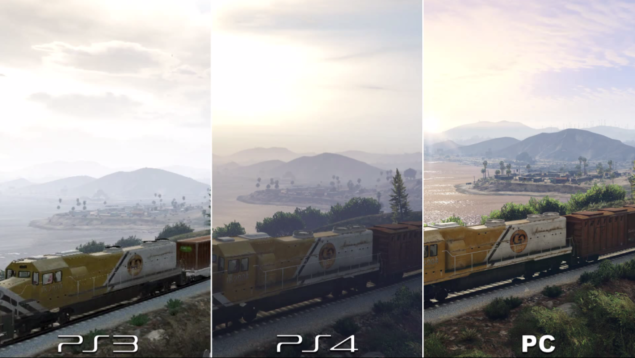 As you can see in the picture above, the difference is apparent between PC and the console version of the game. The one on the PS3 and PS4 is a bit blurry while the one on the PC is a much clearer version of the game. So graphically, if you ask me if the extra time was worth it, my answer will be a big yes. And that's not all, we have for the day, lets have a look at some other screens so you can make a much better judgement yourself if it's the game for you or not.

Certainly, the PC screens are an upgrade to the console versions and the game looks quite refreshing. I'm certainly not advocating GTA V PC version but will tell you that's its a bit harder not to spend it for an upgrade on graphical experience. So, if you want some more reasons on why to buy the game, you can check out an older version of my article if you - Click here. Although, you might find a couple of pointers that have gone redundant by now, but it will still very much help you get to a decision on the game. So keep an eye out for the 14th April release date and you can pre order you game via steam, here.