Disclaimer: The conclusion given at the end has been given in a completely non-professional capacity. Therefore, we cannot be held liable in any way.

Google posted its quarterly earning recently and the result was slightly higher than what analysts had predicted. Its market cap is nearing 400 Billion Dollars. Google has stated that it would pay the dividend in the form of a class c stock (perfect for investors who will sell after roughly a year).

“We ended last year with another great quarter of momentum and growth,” Google chief Larry Page said in the earnings release. And indeed that does seem so, with the recent sale of Motorola to Lenovo, which was thorn in the relationship between Samsung and Google. The positive deviation from the analysts prediction is associated to its ad revenue. Reporting both on GAAP and non-GAAP basis: 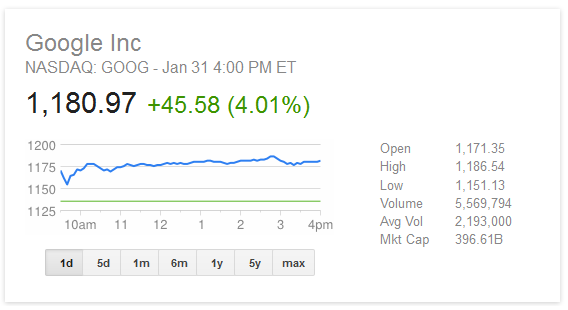 Broker Canaccord Genuity noted that Google's website ad revenue had grown by a decent 22% in the fourth quarter. A total of 13 firms upped GOOG's PTs by about approximately 3.6% following the Q4 results. The end of the fiscal year for Google has been unexpectedly better and this is mirrored in its stock. Needham upped PT from $1150 to $1350 impressed by Google's paid click growth and Other Revenue. This includes Chromecast and Nexus 5.

Verdict: Google's shares are quite strong considering the fact that they were trading at around 750 USD this time last year. Secondly Google's Enterprise Value now exceeds that of Apple. Googles Enterprise Value is 342B $ compared to Apple's 301B $. Selling GOOG now would offer returns at the moment though the uphill trend should continue with Motorola gone (it had an operating loss of 384 Million this quarter) but more importantly Google's CPC is expected to rise in the next quarter so that should ensure stability too.

The statement of income and balance sheet can be downloaded from here.

#Google's Q4 Earnings better than expected and attributed to Ad Sales. And thank god for the Motorola sell. http://t.co/2qAo97ZN2Z