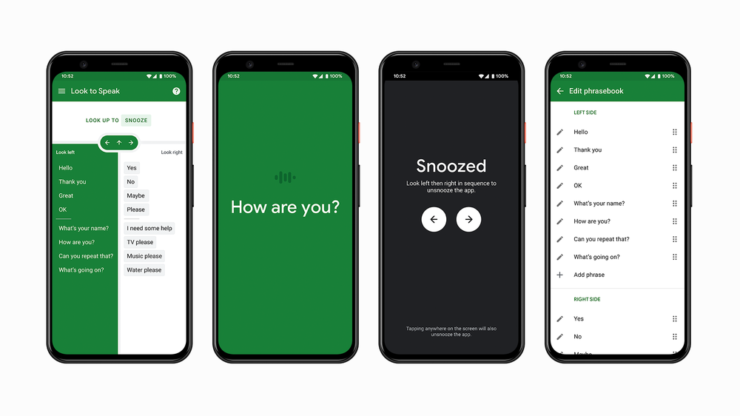 When it comes to introducing new features, Google is always up to something. Now they have released a new feature called Look to Speak, an accessibility service that will allow the users to control their device with their eyes.

Obviously, you cannot go ahead and start navigating through everything using your eyes, but the app lets you select from some preset list of characters, words, phrases, and actions by moving your eyes up, down, left, or right.

Now, Google is bringing this feature because many people are not as non-disabled as us, and they still have something to say, but they cannot for one reason or another. More often than not, they don't have the means to communicate what they want to communicate. Look to Speak aims to change that as it offers a completely customizable means of expressing oneself that can also be tailored to fit the needs.

Eye control is nothing new, there are a lot of applications that are already being used, but Google has just managed to find a way to make it not only more portable but also more accessible. This means that users who use wheelchairs can easily use this feature without carrying more and more tech with them.

The project started as part of the "Experiments with Google," which has a sub-group called "Start with One," an initiative meant to design a product for one specific person before they go ahead and start expanding it to other people with similar needs.

At the time of writing, Look to Speak will let you select phrases, speak them aloud, snooze the screen, as well as edited your phrasebook. You can check the video below to see how it works.

In addition to that, you can head over to the blog post and read all about it.