As our smartphones and gadgets transform in terms of hardware, software's started to catch up nicely as well. Today's operating systems themselves come with a variety of new features that complement hardware upgrades and enhance user experience even the more. After all, if it weren't for software, our devices would be only pieces of silicon, metal and glass, capable of functioning as quite efficient paper weights.

With the launch of the iPhone 6s and the iPhone 6s Plus this year, Apple borrowed a couple of features from the Apple Watch and made some introductions of its own. One of these, live wallpapers are intended to make the iOS experience even more pleasing to users, since Apple has always paid a special attention towards design and software aesthetics in particular. Well today, we've got some news from the other end of the smartphone world i.e. Android and folks over at Google's Creative labs coming up with a completely new use for live wallpapers.

While folks over on iOS will be enjoying animations and other offerings from Apple courtesy of live wallpapers, those using Android will have found a way to efficiently view their device's performance figures and statistics. Using an interesting assortment of geometric shapes as shown in the images below, your Android device will now show real time information on your screen. 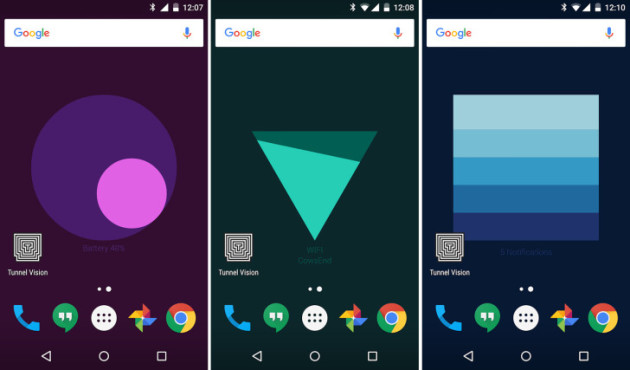 Not only has Google created a way to display Android stats in a wallpaper, but the company's Meter wallpapers will also alternate between three different backgrounds, with different shapes. Each shape will represent a different usage statistic as well. For example, the image on the left is of battery statistics, with the smaller circle representing the amount of hours your phone has left before you're going to need a recharge.

The signal strength is represented by the Triangle and on the extreme right we have the notification bars which increase in number corresponding to your notifications. They're also hooked up to the accelerometer on your device, so you can expect some interesting effects as you move your gadget around. So if you're looking to download and install Meter wallpapers on your device, click on the link below and let us know how your experience went in the comments section below. We'll keep you updated on all the latest in the meanwhile.