Google Assistant is one of the best tools that Google has made in a long time, and at this point, you can summon the Assistant by long-pressing the home button or by voice. But for those who don't remember, before Assistant got its name, the long-press action belonged to Google Now on Tap, a feature that managed to scan what was on the screen and gave you contextual information about it. The feature was not only accurate but a lot more convenient than one might think.

Google Assistant Could Once Again Become a Lot More Convenient

The feature did appear on Google Assistant as "What's on your screen," but sadly, it never became a major focus of the Assistant. At this time, it keeps appearing and disappearing on various A/B tests. The "What's on my screen" option used to appear on Google Assistant as a suggestion on the main screen of the Assistant, and upon tapping on it, it gave you the information based on whatever was being displayed on the screen. Now it seems like Google is looking to bring back this feature for everyone.

According to an APK teardown done by XDA Developers, it has been discovered that the feature might be coming back. 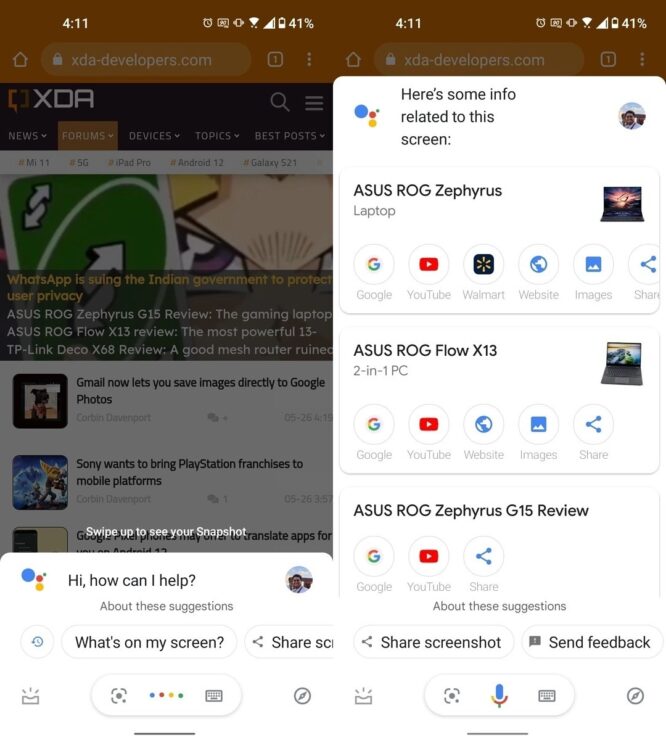 The teardown reveals that Google is bringing the new My actions sections back to the Assistant screen. Google is also testing the "on my screen" section that will appear in the same section.

As you can see, the UI still looks to be incomplete, but at least it is nice to see that Google might be working on bringing this feature back to Google Assistant. I am really hoping that this feature returns as a full-fledged feature rather than just an afterthought or something you add because you don't know where to begin with.

As for the release, we are not sure when this feature will finally make its way to the final version of the Assistant, but we hope it shows up in one of the future updates.