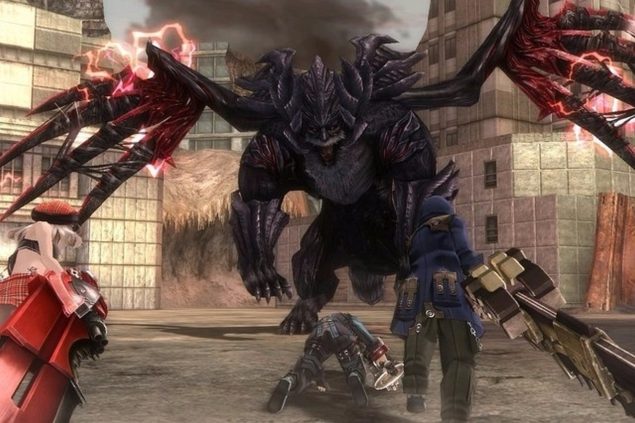 Cult classic franchise God Eater is back in a big way, with two titles coming to the West in the next year as announced today by Bandai Namco.

God Eater Resurrection and God Eater 2 Rage Burst will be available to buy on PlayStation 4, PlayStation Vita and PC in the Summer.

Resurrection will take players back to the beginning of the franchise in a rather complicated way. A remake of God Eater Burst, which is a remake of the original Japanese-only God Eater, the game will feature extra balancing and a new story to connect it with its sequel. Here's some background on this post-apocalyptic world:

In the early 2050s, unknown life forms called “Oracle cells” began their uncontrolled consumption of all life on Earth. A ravenous appetite coupled with a remarkable adaptability quickly turned those cells into the Earth’s biggest foe: Aragamis. Giant and invulnerable enemies completely immune to conventional weapons: this is what the world was facing. However, an elite force, called God Eater, was formed to take them head-on by using the recently developed weapons known as “God Arcs”. In a world ravaged by mad gods, these “God Eaters” are engaged in a desperate war…

God Eater 2 Rage Burst was originally released in 2014 in Japan for PSP and PlayStation Vita. The western release will see it ported across to the PC for the first time. Hervé Hoerdt, VP of Marketing and Digital at BANDAI NAMCO Entertainment Europe, said:

In only 5 years, the God Eater franchise turned into a phenomenon in Japan, and Asia selling more than 3 million copies! This monster slaying universe isn’t only bound to games, as our teams managed to successfully expand the experience into other areas such as anime – available on Daisuki.net - but also manga and popular soundtracks.

Our western fans have been asking to get their hands on a localized God Eater game, we heard them and to start with, we are bringing two of them! This is just the beginning as we are planning on bringing more exceptional content to our territories in a very near future.

Are you eager to go monster slaying in this Action RPG? Tell us below, after watching the announcement trailer.