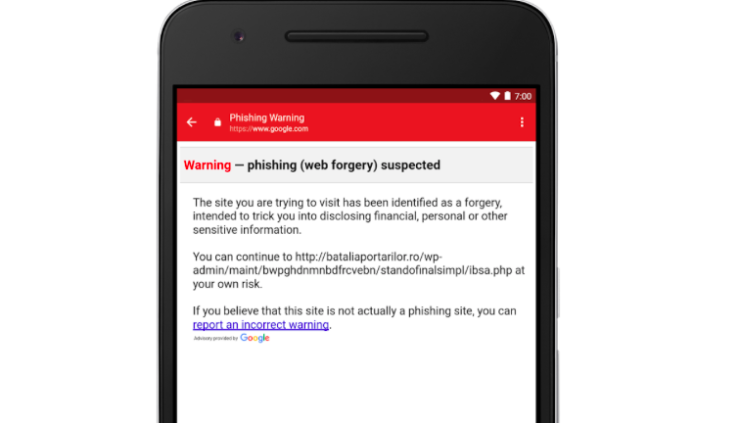 Phishing scams are evil, and they feed on your data like a hookworm. Google has been facing the brunt of it on its various services. However, there is a reason why Google is known as the "tech giant" - because of its immensely talented workforce that is equipped to tackle attackers. Doing what it should have done earlier, Google announced a new security feature for Gmail on Android that will warn users about malicious links.

This feature on Gmail for Android will show a pop-up to warn you if you click on a suspicious link in an email. The pop-up would explain to the user that what the link has in store and if it is dangerous. Google published a blog post on its G Suite blog, which also shows the template message on the warning pop-up feature that is set to debut on Gmail for Android.

Here is the message that you will see in the alert pop-up on Gmail:

The site you are trying to visit has been identified as forgery, intended to trick you into disclosing financial, personal, or other sensitive information.

Remember, this is just a "warning" pop-up, which means that you can still visit the site if you are one of those who likes taking unwanted risks on the internet. You can still go to the destination redirected by the link. Google has introduced this feature just to encourage users to be extra cautious about malicious schemes and links that are purely intended on stealing your data and injecting viruses into your device.

Besides, Google also mentions in the blog post that not all the links tagged under warning pop-up are dangerous. Some are flagged just for the use of certain keywords that Google thinks are suspicious. Regardless, it would be better to pay heed to such warnings. If the email is not from a trusted contact and contains questionable content, then you must steer clear from clicking on the link.

Google is planning to push the feature for a global rollout in the coming days for all the users. For now, it will be limited to Android users, but we can expect Google to extend it to other devices too.