Gigabyte has also displayed its motherboard lineup based on Intel's Enthusiast X79 Chipset. The motherboards were displayed at the IDF 2011 event where Gigabyte showed its Socket 2011 Lineup including the high end GA-X79-UD7 and G1.Assassin 2 Motherboard. 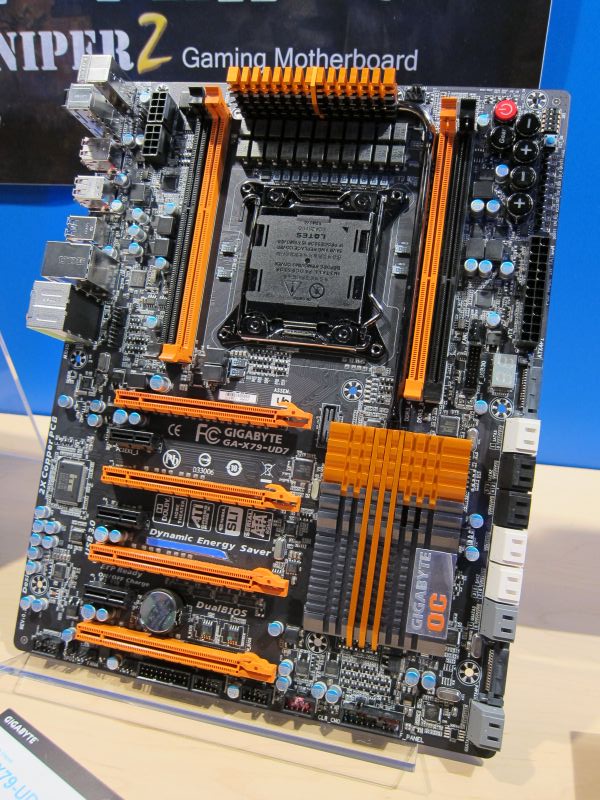 The GA-X79-UD7 Motherboard is Gigabyte's top tier X79 based motherboard  equipped with a beefy 20 Phase VRM/ Power Phase which features POSCaps, MPFC Chokes and Driver MOSFETs which makes it great choice for Overclockers. One thing to note is that being a High End Board, It still features only 4 DDR3 DIMM Slots unlike the other Higher End boards from MSI and Intel we've reported today. The 4 Memories will function in Quad Channel Mode.

The board features a Black/Orange theme color and includes two passive heatsinks, One included at the VRM area and other at the PCH (X79 chipset). Both heatsinks are interconnected with a single heatpipe to transfer thermal load. The board also includes 4 PCI-e 3.0 x16 slots with SLI/Crossfire functionality and 3 PCI-e 3.0 x1 slots.The board is said to feature USB 3.0 and Sata 3 Connectivity ports. Other features include Dual Bios, OC Friendy buttons such as Power ON/OFF, Clear CMOS, reset and Touch BIOS. 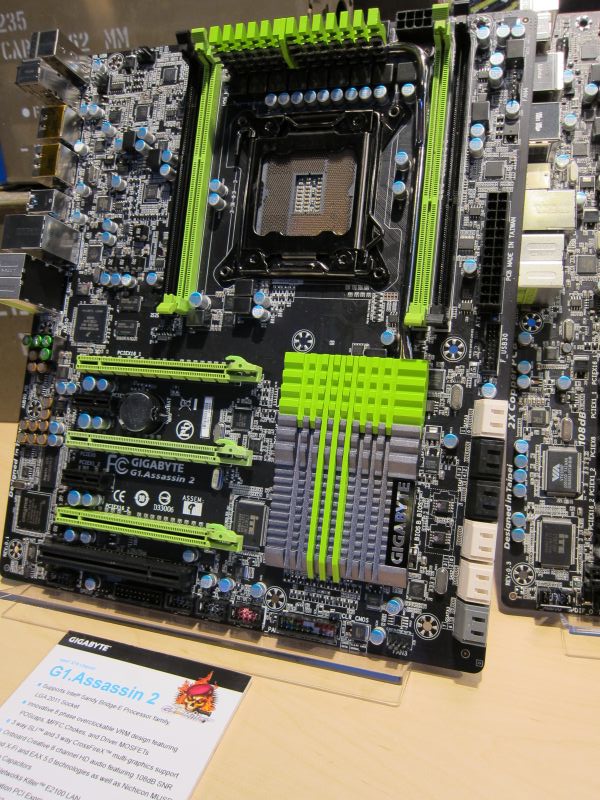 Next up is Gigabyte's much anticipated G1.Sniper 2 Motherboard, Featuring a 8 Phase VRM with much of the power area concentrated at the left side of the LGA 2011 Socket. Four DDR3 DIMM slots allow for Quad Channel memory support, 3 Way SLI/CrossfireX Support, 2 PCI-e 3.0x1 and 1 PCI Slot. One of the main features current gen G1 Sniper boards included were Creative X-Fi 8 Channel Audio and Big Foot Network Killer N2100 LAN support which are also available in the upcoming board.

The Color Theme is Green/Black like older Sniper boards from Gigabyte however the heatsink are similar to the GA-X79-UD7 which may be changed in the final design. 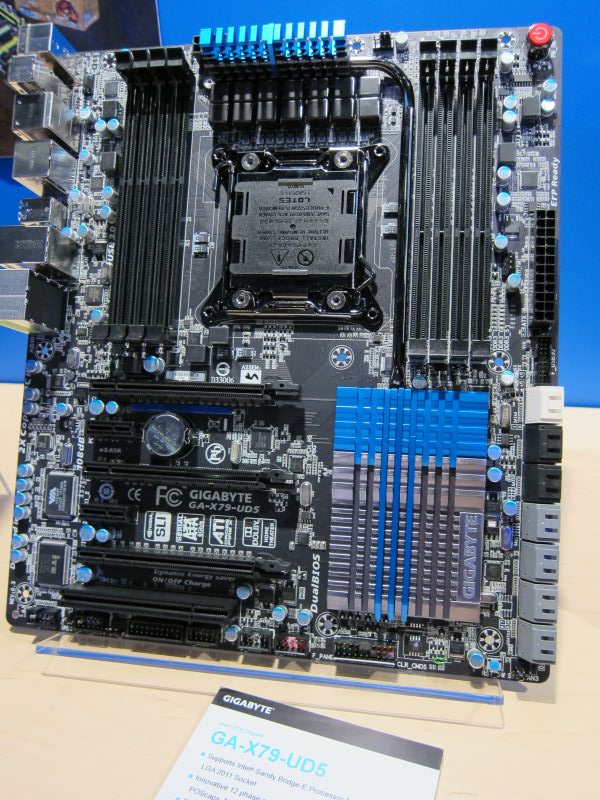 Gigabyte's GA-X79-UD5 equipped with a 12 Phase VRM is a pretty cool board which includes a total of 8 DDR3 DIMM Slots with 4 on each sides of the socket allowing for Quad Channel memory support. The board features a combination of specs from GA-X79-UD7 and G1.Sniper and its price would fall somewhere in between these. The board includes the same amount of expansion slots as the G1.Sniper allowing 3-Way SLI/CrossfireX Support, 2 PCI-e 3.0 x 1 and a PCI Slot. The Same amount of passive heatsinks are included bearing a Blue/Black Theme. 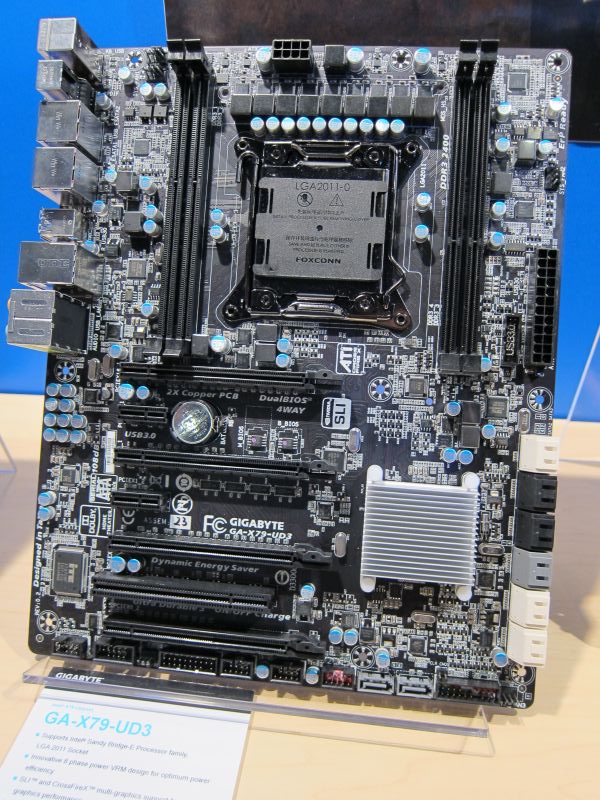 Finally its the Entry level GA-X79-UD3 board with a 8 Phase VRM design. The board would be deprived of the high quality Chokes, MOSFESTs and Capacitors included in the other boards. The board has 4 DDR3 DIMM slots allowing Quad Channel Memory. It includes 4 PCI-e 3.0 x16 Expansion slots allowing for SLI/CrossfireX functionality, 2 PCI-e 3.0 x1 and a single PCI Legacy slot. The board didn't come with any VRM heatsink which means it was still in engineering phase. The boards are expected to release as soon as the first Sandy Bridge-E Processors are available. 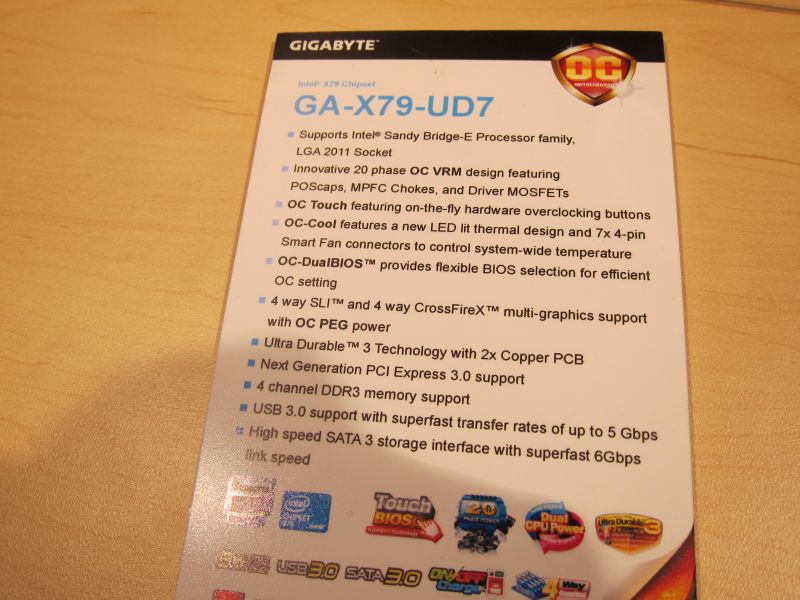 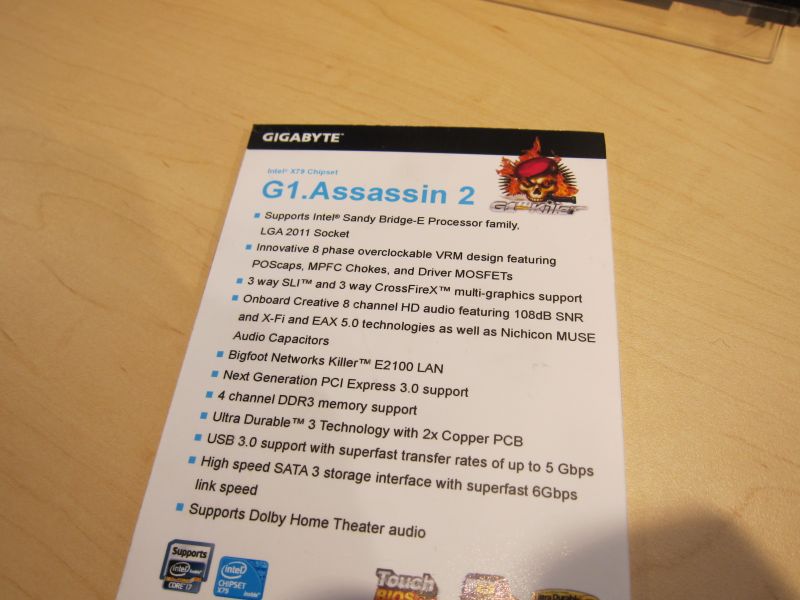 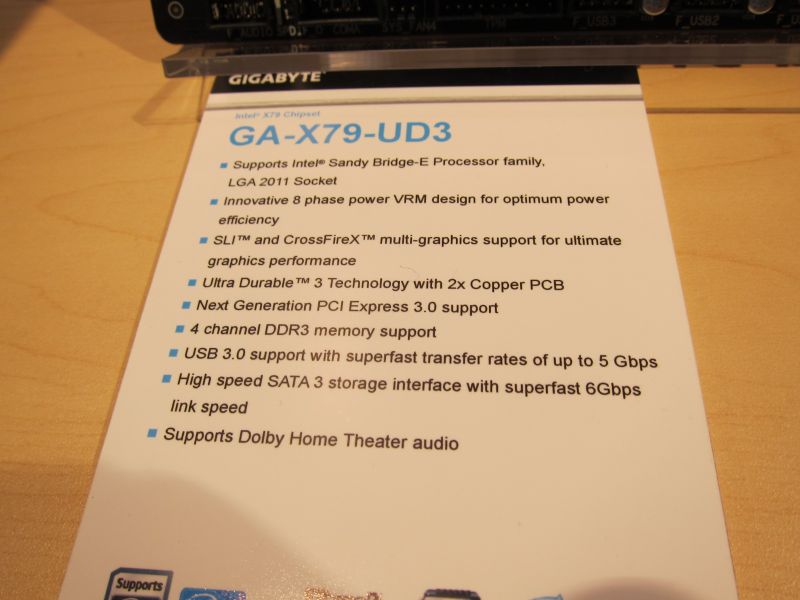