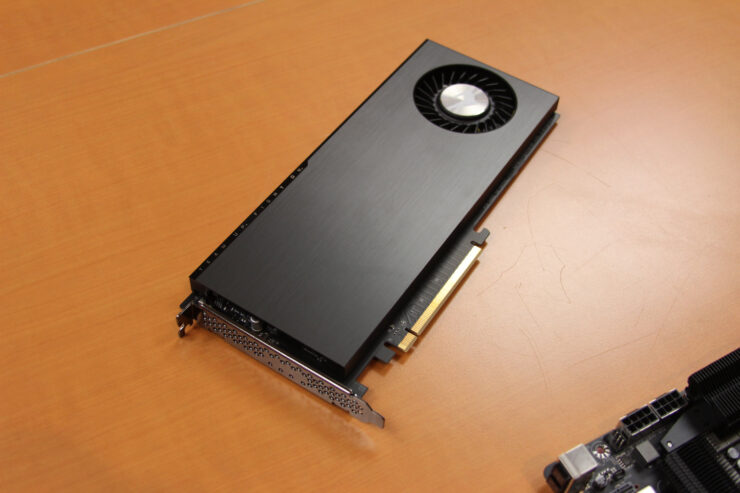 People are out here thinking 5GB/s is the fastest we are going to get with PCIe 4.0. Well, they are all wrong. Gigabyte is out here with a solution that triples that speed at 15GB/s. This puts the Corsair MP600 and others to shame. This is achieved through Gigabyte's quad SSD adapter. It is currently a prototype, but it is slated to come out in the near future as it achieving great functionality.

Could Reach 20GB/s With Additional Tuning

The purpose of the adapter is to reach maximum functionality of the new bandwidth that technically allows for 64GB of memory bandwidth which is not very attainable. After you add in the annoying, yet unavoidable overhead of the PCIe interface and RAID, Gigabyte's new prototype has hit up to 15 GB/s when paired with four of the company's new Aorus PCIe 4.0 SSDs.

Each of those SSDs hit up to 5GB/s, so the card could potentially push up to 20 GB/s with further tuning. To reach the max of 5GB/s, theoretically you would have to use 13 SSD with additional tuning which is very expensive and would result in a massive adaptor, but overall 15GB/s is impressive either way.

Using AMD's hardware RAID built into its motherboard, you can boot directly to this quad-SSD adapter if it's placed in the first PCIe slot. Drop in four SSDs, and you're ready to go. Currently, the most capacious PCIe 4.0 SSDs come with 2TB of capacity, giving you an 8TB limit with the card, but that'll improve when more capacious SSDs come to market in the near future as SSD technology develops.

The adaptor card has a thick and heavy front plate and back plate to keep the SSD cool as these new PCIe 4.0 will produce more heat according to other sources. It also uses a blower style fan to keep air circulating. The SSDs slot into the four standard M.2 sockets on the board. Each has its own dedicated driver to ensure top performance. The card does not require additional connectors for power and is fully powered by the slot. The PCB for this card includes an RGB header, but the final product seems to have skipped out on the lighting as this will be better suited for a high-end creative professional.

Gigabyte has not announced the price, but I am very sure this card will stay out of many enthusiast hands because of the price which is expected to be very high. The adaptor will most likely be bundled with 4 SSDs. This would be a great product for creative professionals such as a movie editor with a company that has the money to provide this product to their editor. This card is very impressive but is not very viable for an enthusiast.