The GeForce GTX 980 Ti graphics card arrived back in June 2015, since it's launch, the card has been on top of the charts in gaming performance and overclocking performance. NVIDIA's GM200 Maxwell core made custom board makers (AIBs) to push non-reference designs in the market with great cooling and PCB designs that gave a further boost in performance to an already great performer. We are in Q4 2015 and just a few quarters away from NVIDIA's Pascal GPU but the race to release the fastest GTX 980 Ti has still not ended yet. 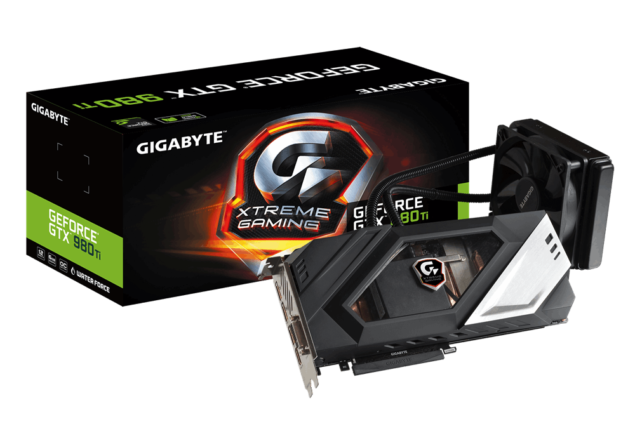 The GeForce GTX 980 Ti incorporates a custom PCB that features an extremely robust 12+2 phase power design and fitted with quality components to ensure the best possible operation under normal, gaming and overclock loads. The PCB features a high-end uP1983A voltage controller which lines in perfectly with the beefy nature of this card. The whole solution is cooled by an closed loop, AIO liquid cooling solution that includes a durable 120 mm radiator that will push the liquid through robust FEP tubes to a large pump and waterblock that provides full base cover on the GPU/RAM/MOSFET. The GPU is powered by Dual 8-Pin connectors but those users who'll indulge in LN2 overclocking can use an extra 6-Pin connector and initialize the LN2 bios for further overclocking potential.

One might argue that Gigabyte might have sucked all the juice out of the 980 Ti WaterForce and little overclock headroom remains for overclockers. That's not the case as TPU managed to further overclock the card up to an clock speed of 1510 MHz core and 2100 MHz memory (8.4 GHz effective clock). This further pushed the card's performance to another 11.4% in one of the title (Battlefield 3) when tested. The clocks were stable and tested with the default voltages and fan settings, regardless, the cooler maintained its performance at 50C load temps and 33dBA load noise output which is impressive. Even the much expensive Titan X wasn't able to keep a good fight against the custom model which shows just how impressive cards from AIBs have become. You can check out TPUs full review on their official site. 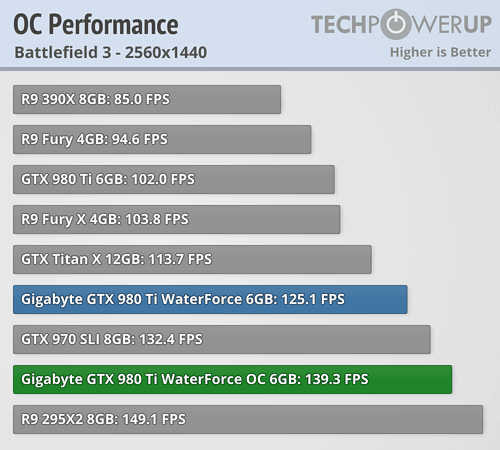 The overclocked models of the GeForce GTX 980 Ti are insane and quite frankly speaking, AMD has no solution of their own to tackle them. The Radeon R9 Fury X was kept as a reference offering, the Radeon R9 Fury which has received several top-notch custom solutions is around as fast as the R9 Fury X. The GTX 980 Ti models have put an impressive show prior to the launch of Pascal. The GTX 980 Ti (reference model) itself remains lost in all the glory shown up by the overclocked models but these models might also put NVIDIA in a dire situation when Pascal arrives. With a 20% lead over the reference GTX 980 Ti, Pascal would have to deliver faster numbers that could be anywhere around a massive 40-50% increase over GM200.