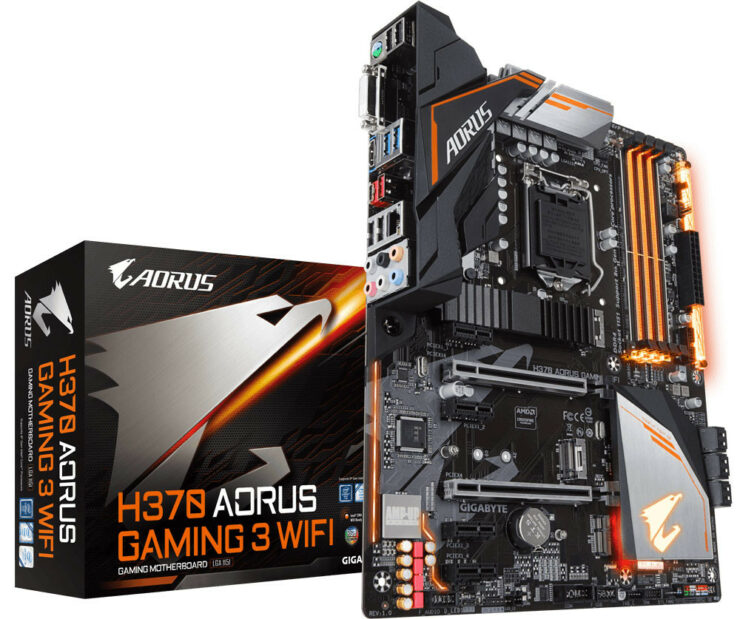 H370 and B360 AORUS GAMING 3 WIFI motherboards implement an Intel Wireless-AC 9560 module with Intel CNViTM WIFI technology to support 802.11ac wireless features and BLUETOOTH 5. The motherboards deliver wireless connectivity that is significantly faster and more stable at further range when compared to previous WIFI solutions. Under the AORUS design, the 2x2 802.11ac WIFI Wave 2 is optimized for faster download speeds even under dense network traffic as well as delivery speeds up to 1.733 Gbps when using 160 MHz channels, doubling that of standard designs. Simultaneous support for multiple devices is enabled on these boards by their 2T2R Antenna design, resulting in a maximum transmission bandwidth 2x higher than that of previous generations. In addition, the boards offer lightning-quick Ethernet from its Intel GbE LAN with cFos accelerator and WTFast. The inclusion of a GIGABYTE exclusive gaming LAN RTL8118 Ethernet controller gives the gamer advanced control over net traffic priority, something MSI, and ASUS have attempted to do in the past.

While not allowing overclocking the H370 and B360 Gaming 3 Motherboards still pack a Hybrid 8+2 Phase VRM which may be to allow the future 8 core i7 CPUs which are supposed to come out this summer, unlike the EVGA motherboard we also reported on today these motherboards lack the external clock generator making any type of CPU overclocking out of the question.

The motherboards are also meticulously designed with highly power-efficient components so that power consumption is compliant with standards set by the CEC 2019 Energy consumption regulations. A BIOS option is available for activating the power-saving mode in which the motherboards conserve up to 15% less power relative to older platforms.

Onboard audio quality is also significantly bolstered by the upgrade to a Realtek ALC1220-VB audio CODEC. The improvement is particularly noticeable for the front panel MIC with SNR values increased by almost 20% to 110 dBA, enhancing the audio fidelity of the streaming experience. This is a welcome improvement over the older Realtek ALC 1150 that has been around for a few years. Also impedance-detecting Smart Headphone AMP prevents distortion and low volume issues automatically.

Gigabyte also goes on at length in the press release about their redesigned M.2 Heatsinks which should improve performance on some of the fastest and highest performing drives which we are happy to see improved upon. They also say each of the two M.2 slots utilize specially designed GIGABYTE dual slot mode which automatically detect and switch between SATA and PCIe mode for an easier building experience. This should make setting up your system an easy plug and play solution.

Finally to round it all off they come standard with RGB Fusion with support for 5v and 12v lighting strips which can be controlled by your boards software.

Unfortunately we did not get any information on pricing but should expect to be getting the information soon, as for availability Gigabyte says we should be seeing them on store shelves very soon.