Gartner has released a report concerning tablet sales between 2010-2015. The tablet market has grown significantly since last year with sales rising from 17.6million in 2006 to to nearly 63.6million units in 2011 which is a 261% increase. The major benefit of the growing market is to be for Apple, the iPad which had a 83% market share in 2010 is expected to have a 73.4% market share in 2011. Although that is down by 10% in an year, the market as a whole has grown hugely and Gartner says, Apple will continue to have a huge market share in the tablet market, which is expected to be larger than 50% till 2014. 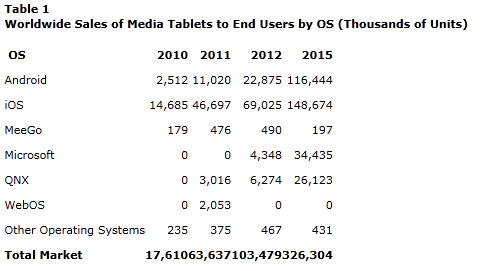 Considering the iPad line is currently made up of only 2 products whereas the main competition, Android, has many tablets to offer both from HTC and Samsung as well as other companies. Despite that Gartner's forecast shows exactly how much of a success the iPad is with a huge 73.6% expected market share this year. Moreover, the company thinks Apple is likely to have a major cut from tablet sales all the way to 2014.

We expect Apple to maintain a market share lead throughout our forecast period by commanding more than 50 percent of the market until 2014. This is because Apple delivers a superior and unified user experience across its hardware, software and services. Unless competitors can respond with a similar approach, challenges to Apple’s position will be minimal. Apple had the foresight to create this market and in doing that planned for it as far as component supplies such as memory and screen. This allowed Apple to bring the iPad out at a very competitive price and no compromise in experience among the different models that offer storage and connectivity options.

As expected, Gartner says Apple's success is due to iOS's unique and simplified user experience and the competitive price of the iPad. As far as Android is concerned "high prices, weak user interface and limited tablet applications" are responsible for Android lagging behind Apple in the tablet market but Gartner says, Android's next release, Ice Cream Sandwhich should help Android perform well in the tablet market. In 2011 Android's market share of 17.3% compared to Apple's share of 73.6% is much much lower but the gap is expected to shorten by 2015 when both android and iOS are expected to have nearly half of the tablet market to themselves.

Aside from the two big players, we also have Microsoft which is gearing up to launch Windows 8 in 2012 and Research in Motion is expected to launch QNX OS. Both are expected to grow over the period but it is unlikely any of them will have a huge difference on the tablet market. Gartner says QNX OS "is a promising platform but still in the early stages of development" and RIM needs to focus on attracting developers to the new platform. On the other Microsoft's Windows 8 might not be a good move on Microsoft's part "if Microsoft’s push to use the new OS across devices comes at a compromise in usability." Besides by the time Microsoft comes out with Windows 8, it will be even more difficult for it to grasp hold of the tablet market as iOS and Android will have a even better stronghold next year.

Most of Apple's competitors are struggling to meet Apple's prices without considerably sacrificing margins. Screen quality and processing power are the two hardware features that vendors cannot afford to compromise on. They should consider everything else ‘nice to have,’ rather than essential, in order to keep bills-of-materials costs competitive with those of the iPad.

In short, Gartner expects, the iPad to be the major player in the tablet market whereas Android is expected to catch up in the coming years with Ice Cream Sandwhich and better applications for tablets. QNX OS and Windows 8 on the other hand are not expected to have a significant effect on the tablet market since they are still in their early stages of development and haven't even been launched yet. The market as a whole is expected to grow largely from 63million units sold in 2011 to a forecasted 326million units in 2015 i.e 517% growth over 4 years. It will also be interesting to see how this affects the smartphone industry and the traditional PC in the coming years.