A recent survey conducted by PlayFab had some very interesting and enlightening news regarding how gamers in general feel about data security and the developers we entrust that data with. 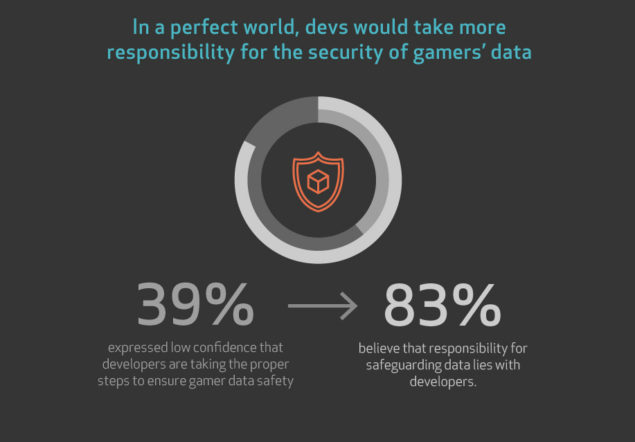 Gamers have low confidence in game companies to secure their data.

The survey conducted asked a plethora of different security related questions to around 500 different gamers that spent at least four hours a week gaming. The conclusion was that gamers want developers to take responsibility for securing data. We trust them with some, at times, precious details and it would be remiss to see even what might seem like a benign security question or birth date end up in someone eases hands, and then used as part of a plan to steal an identity.

In their survey, it seems that 83% of respondents thought that developers should be responsible for the overall security of data. Only 30% were actually aware of any previous security breaches and 39% expressed that they have very low confidence in the ability of most developers to make security a priority.

In-game items have real value at times, and even if items doesn't necessarily translate into real currency, there is a certain innate and internal value to those items, so losing them in any way shape or form could be quite disappointing, or even devastating. An episode from The Big Bang Theory followed Sheldon having his WoW account hacked into and all of his precious items taken. He was very distraught by losing everything, and all that hard earned progress. While it might seem a bit silly at first. Imagine if that happened to you, even if you never paid real money for anything. Those in-game items suddenly gone. If you enjoy the game it becomes quite frustrating indeed.

When those get hacked, it can throw a game’s entire economy out of balance, or turn off potential spenders because they see leaderboards full of impossible scores. This kind of virtual data also has real value to players, for whom it represents an investment of time and energy.

More responsibility and measures need to be taken to ensure that only we get to access our accounts, and of course that data-breaches themselves don't happen. And quite frankly, for developers, they should automatically assume that everything is susceptible to being hacked. Everything is vulnerable. This mind-set can help to increase awareness and the relative security of a given platform or game.

Along a similar vein, I've published a paper regarding how the seedier parts of the Internet go about finding details about individuals to correctly answer security questions and then proceed to break into email accounts and steal any naked photos, and parsing through many different sources, such as any data entered in an online gaming environment, can be just one of those methods.