Have you been looking for a good online FPS game? don't want to break the bank for one? or don't think a game is worth the price? here is a useful guide to help you decide good / free games on Steam Store which will definitely satisfy your FPS gaming needs. 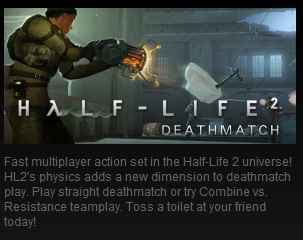 a great game and with a decent online population, you can also get the game for free by visiting Here if you have an Nvidia GPU and if you have an ATI GPU you can go HERE 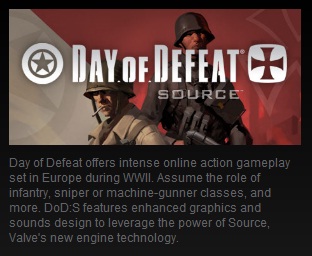 For $10 bucks you can buy this World War 2 based FPS game based on the popular Source engine, the game has a great online community, custom maps, and great WW II weapons so if you are into WW II shooters this is a game for you. 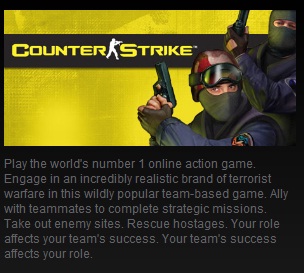 A golden oldie, EVERY PC gamer has to know about Counter-Strike this was one of the best and most addictive online FPS games in it's time and it still holds that trophy proudly. With this game being a part of the WCG and with many intercity tournaments across the world this is definitely a great game with a VERY active online community. 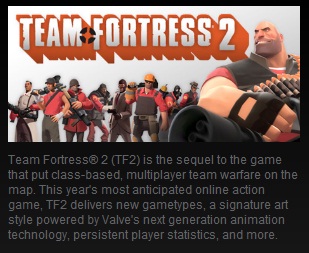 One of Valves better creations, this game has a VERY active online community with custom maps, game modes and plenty of well populated servers located across the globe you will DEFINITELY want to buy this game if you can afford, though it does go on sale very occasionally especially when a class update is released. This game is like no other game you have ever played. You can use weapons like Mini guns, Flamethrowers, Rocket Launchers, Sticky Bomb Launcher and there are even more weapons for you to unlock when you complete a class's achievements.

Not only can you unlock weapons but you can also unlock add ons and make your character look awesome. Through a random distribution system players are given anything from a new weapon to a new wig or a new hat for your character to wear, this is definitely one of THE MOST customizable games out there and definitely one of the more addictive games. 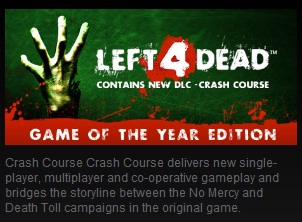 Old is gold indeed my friends, Have you ever watched or played Resident Evil and wished you could be a survivor in a zombie apocalypse? well your prayers have been answered Left 4 Dead maybe old but it still has a pretty active community of players, with lots of customizable maps. And the game is still very challenging playing online with friends is the best part of this game and can lead to funny stories and even hours of hilarious gameplay, you can choose to work together and end a campaign consisting of 4-5 stages or you can compete in a 4V4 battle of humans vs infected.

Left 4 Dead is a good buy but I would recommend you either wait for this game to go on sale or save up $10 more and buy Left 4 Dead 2 instead. 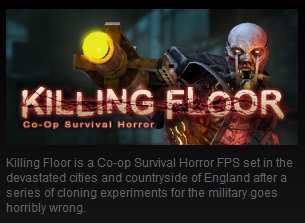 Another zombie survival horror game which I still enjoy, Killing Floor is a very linear game unlike Left 4 Dead and Left 4 Dead 2 you are in a single map and you have to fight of "waves" of zombies each wave increases the number of zombies you kill zombies for cash and cash buys you new weapons and armor. You are basically saving up all this money to defeat the end game boss known as a Patriarch. You can choose a certain class as well such as medic, commando etc each with a special ability such as faster healing, more damage with melee weapons etc.

With a good range of weapons, active community, good modding community for custom maps and a very thrilling game especially on insane difficulty Killing Floor is a must buy if you enjoy using melee weapons on zombies such as chain saw, axe and even a combat knife. Or you can use regular weapons like machine guns and flame throwers. 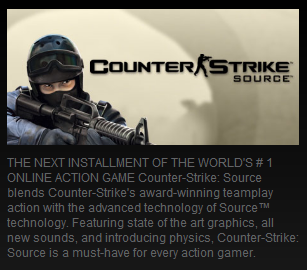 A classic game reinvented using a modern engine, with better physics thrown in making the game more realistic and MUCH better weapon and skin textures and a great online community as always CS:Source is among one of my top recommended online games to buy for sure.

The game even today is graphically impressive and right now this game is about to get a huge make over with Valve working on adding lots of neat features like achievements, kill cam and end round MVP results you can find out more by going HERE even by today's standards this is a great game and definitely worth the $10 extra price tag. 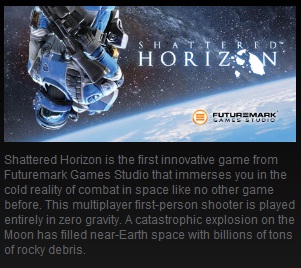 The company which brings you the ever popular benchmark "3DMark" made its debut in the gaming world by releasing a beautifully designed zero gravity shooter, Shattered Horizon is a great game if you love zero gravity, space and very futuristic weapons with lots of free map packs and other goodies (free of course) Shattered Horizon is a must buy for all you space fans. But do keep in mind the game is QUITE heavy and DOES require a Direct-X 10 based OS such as Windows Vista or Windows 7. So if you have a good PC and are using Windows 7 then you should definitely give this game a "shot".

This is where I think I should make one big list for the games above $20 and ranging all the way to $60. So here it goes. 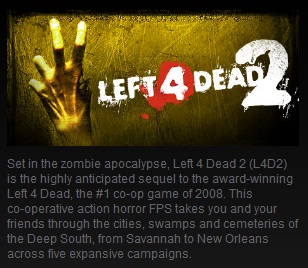 A sequel to Left 4 Dead (no really?) which has much more to offer over its predecessor, with more infected thrown in to the mix, melee weapons, and new characters this game is a DEFINITE buy if you enjoyed Left 4 Dead or simply want a good zombie apocalypse based survival horror game. You get to be VERY brutal against zombies in this game by using painful weapons such as sharp swords (Katana's) fire axe, Grenade launcher into a horde of zombies, and even the chainsaw which is PURE ownage (until you run out of fuel that is).

This game like its predecessor has a great modding community so there are plenty of 3rd party maps you can enjoy if your bored of the current maps. And the online community for this game is much greater over the first one and offers a whole lot more so if you can be patient and wait for a sale then this game is definitely worth it. Otherwise if your impatient and wanna slice up or chop up zombies buy this game right now. 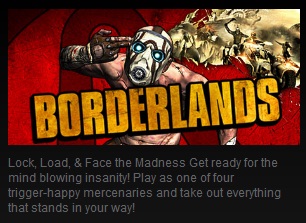 Another great game to enjoy online but this is a bit more "unique" its an RPGFPS as in its a Role Playing Game with FPS thrown in it. You will do missions to gain level and items and you continue leveling to gain points, which can help you level and purchase better weapons.

If you can afford the DLC's I would highly recommend this game for online playing it's great if your a fan of RPG games and are looking for something new over your typical FPS games. 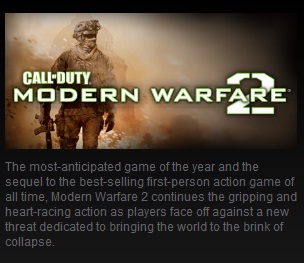 This is probably one of the highest played online games after the Counter-Strike game series on steam. Even though the game had huge criticism of lack of dedicated servers, and lack of modding community the game is still very active in players and you will have very little or no problem at all in joining a game quickly with decent or great ping.

The game allows you to unlock weapons and upgrades for your unlocked weapons as you level up and complete certain tasks such as get 20 kills with USP to unlock so and so upgrade. The level cap is at 70 and believe me leveling from 1-70 can take a lot of time. And if you ever want to level up again you can simply prestige and start over again. Though the game lacks a modding community the game is still great online and definitely worth the online. 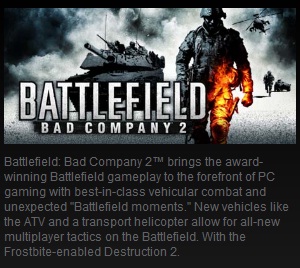 Another great game which I feel is the closest competitor to Modern Warfare 2's large online community. The Battlefield Franchise always delivers when it comes to great online fun this game also has a leveling system but its limited to level 50. The game is also quite heavy as opposed to Modern Warfare 2 so you will need a good PC to keep 30+ frames on your pc.

The game is ABSOLUTELY fantastic you can do insane stunts like run up to a tank as a sniper plant 3-4 C4 charges and run like a headless chicken away from the tank and blindly right click without knowing if your too close or not. This game really gets your adrenaline pumping especially when it comes to close quarters where your having a knife fight with an opponent. You can choose from a variety of classes each being useful in their own way. Recon (Sniper) class for example carries a series of sniper rifles and you unlock weapons by of course leveling or playing with your favorite class for points. Recon is a great class for when you want to surprise your enemies and want to ninja bomb tanks and grounded choppers. Aside from Recon you have Engineer, Assault and my personal favorite the Medic, as you proceed you will see that this game is definitely worth the cash. If i had to choose between this and Modern Warfare 2 I would choose this game in a heartbeat.

With free map packs and a great online community I would HIGHLY recommend Bad Company 2. But do keep one thing in mind. The game mechanics are very unique and you will die a lot when you start off but later on you will learn how to survive longer.

This list is my compilation of some of the best games available on the PC right now I did not consider games which are in the BETA as those are subject to change in the final release, I hope you like this article and maybe in the future I might work on a guide for a different genre of games such as Third person shooters.