Any self respecting adult who grew up in the 90's HAS to know about the Back to the Future trilogy, one of the best movie series of all times and a timeless classic. Back to the Future centers around the adventures of Teenager Marty McFly and Doc Brown and a time traveling Delorean. In the first movie they go to the past, the second they go to the distant future, and the third one they go to the wild west, Telltale games is helping bring this classic the attention it deserves, in the form of a point and click adventure game (Telltale games is synonymous with point and click adventure games).

I am definitely sure that Telltale Games will make a episodic deal for the game which will definitely have 3 or more episodes each based on the movies storylines or something completely new. So far I can be certain that we can expect to see this game on the Wii and the PC in the near "future" (just kidding the game is coming out this winter) 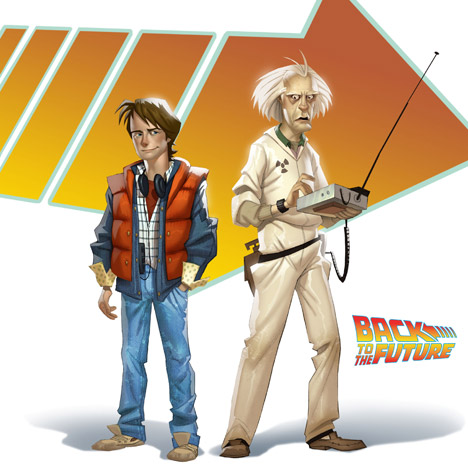 Developer Telltale Games today announced its upcoming Back to the Future episodic game series will include the original movie likenesses of Marty McFly (Michael J. Fox) and Doc Brown (Christopher Lloyd). Lloyd himself will voice Doc Brown in the game's five monthly episodes.

"Creating cinematic adventures true to the source is a top mission for Telltale," says Telltale CEO Dan Connors. "Securing Marty and Doc for the games, and presenting the experience that fans know and love, has been top on our list since we initiated development."

Back to the Future co-creator and writer Bob Gale is consulting on the game's characters and storyline.

Little details about the game have been revealed so far, but Telltale promised the iconic DeLorean Time Machine will also return for the game. Those attending the Penny Arcade Expo this weekend will be able to see an authentic replica of the car on display in the Convention Center's South Hall.

Back to the Future: The Adventure Series comes out this winter.

These are all the details so far on the game we can expect more at PAX (Penny Arcade Expo) this weekend.