Intel Launching 18 Desktop Skylake-S CPUs In Two Weeks – Including Core i7, Core i5, Core i3 And Pentium SKUs

So far only Intel's i7 6700K and i5 6600K have shown up at US retailers but in two weeks time the entire lineup will reportedly be available for purchase. The remaining chips from the desktop Skylake lineup which will be showing up at the end of the month include the locked i7 and i5 variants as well as Core i3 and Pentium processors. 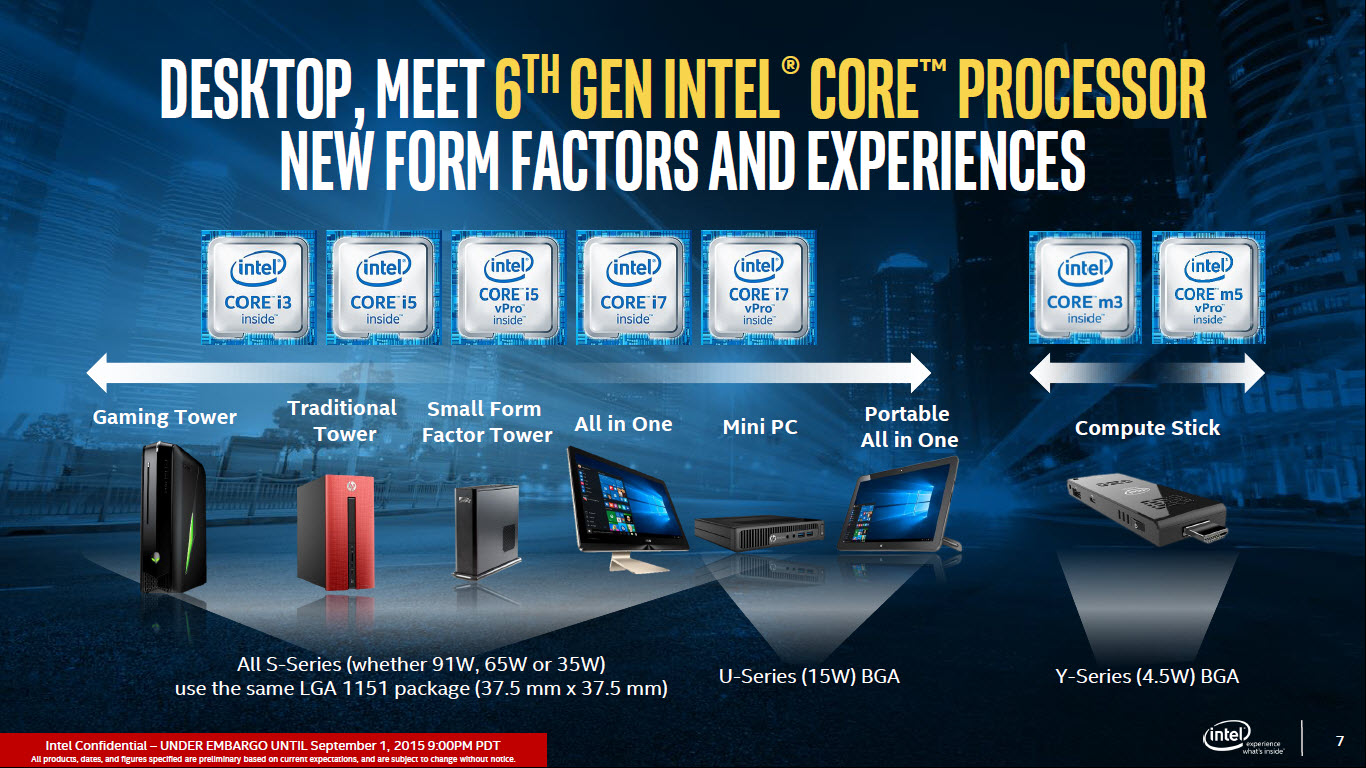 On September 1st Intel officially introduced their entire Skylake processor lineup featuring a wide range of SKUs that feature TDPs ranging from 4.5W to 65W. Intel initially kicked off the debut of the Skylake family with perhaps two of the most sought after SKUs, the unlocked Core i7-6700K and Core i5-6600K chips. However the rest of the desktop 6th generation Skylake lineup which Intel introduced on September 1st will finally be available to buy at the end of the month.

Full Intel Desktop Skylake-S CPU Lineup To Be Available In 2 Weeks - Includes Core i7, Core i5, Core i3 And Pentium SKUs

The Skylake-S lineup is made up of 20 total SKUs, two of which we've already mentioned above. The remaining 18 chips feature four 65W (locked) processors and four 35W low TDP chips. These processors will be compatible with the LGA 1151 socket powered Z170, H170 and B150 chipset based motherboards which Intel introduced earlier this month. Featuring full support for DDR4 memory and next generation storage devices, the Skylake-S platform will deliver improved CPU performance and energy efficiency over the previous generation Haswell parts. We have neatly compiled the entire Skylake-S lineup in the list down below. For the detailed specs for each SKU take a look at the table at the very end of this article.

Intel will be debuting 4 35W T-Series CPUs, the T stands for low TDP. All of these CPUs operate under a 35W TDP, 30 watts less than their mainstream siblings. The lineup includes the Core i7-6700T - which is the only hyper-threaded quad core in the lineup - which comes clocked at 2.8 GHz base and 3.6 GHz boost and as with all mainstream i7 processors 8 MB of L3 cache. Moving over to the Core i5 SKUs we have the Core i5-6600T, Core i5-6500T and Core i5-6400T all with 6 MB of L3 cache and no hyperthreading. These chips have boost clocks ranging from 2.8 to 3.6 GHz. Moving further down the food chain we have the Core i3-6300T, Core i3-6100T, Pentium G4500T and Pentium G4400T which are the dual core parts. All be it only the Core i3 SKUs include support for hyper-threading. Intel states that the i3 parts will occupy the price points at $150 and below while the Pentium chips will target the more budget friendly $100 and less price points.