After raiding Windows Phone 7, iOS and Android the renowned Fruit Ninja is now heading over to consoles, invading Xbox 360 first. The game is titled as Fruit Ninja Kinect that means Microsoft has duely fulfilled its promise of adding Kinect support to arcade games. Love to cut and splash fruits and veggies then don’t miss the upcoming magnum opus with something that you weren’t able to do on your touch screen. 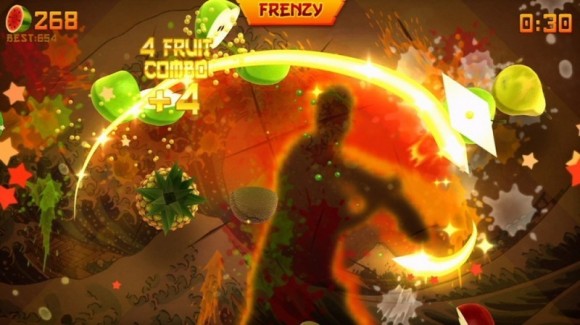 Fruit Ninja Kinect is the same game that fans know and love, only with much nicer HD visuals and of course Kinect motion control. Players swipe with their hands to chop the fruit now instead of just their fingers. It’s actually a much more exciting (and tiring) take on the original concept.

But here’s something more intriguing. Ever wanted a partner to assist you getting rid of the annoying fruits? Well you can get one now as the Kinect version introduces something missing from the touch screen game: Multiplayer. This version supports both co-operative and competitive gameplay for two players. This makes Fruit Ninja Kinect the perfect party game – it’s an active new spin on a game everybody knows and loves, plus others can join in the fun. Take a look at the gameplay shown off by IGN.

The title will be available on Wednesday for 800 Microsoft Points ($10). Of course Xbox 360 owners will also need a Kinect peripheral in order to play it. Kinect players who aren’t in a huge hurry may prefer to wait for the retail release of The Gunstringer (from developer Twisted Pixel) on September 13. It costs $30 and includes both The Gunstringer on disc and a download code for Fruit Ninja Kinect.

What are you waiting for folks? Go get an Xbox 360 and Kinect!