Pure play wafer foundries are urging their customers (on 200mm wafers) to shift to 300mm wafer designs as soon as possible. Most of the foundries’ 7.9 Inch capability is occupied by LCD driver integrated circuits and the manufacturing concerns believe they could be put to better use if the LCD customers shift to the mainstream (and economical) 300mm wafer solutions. 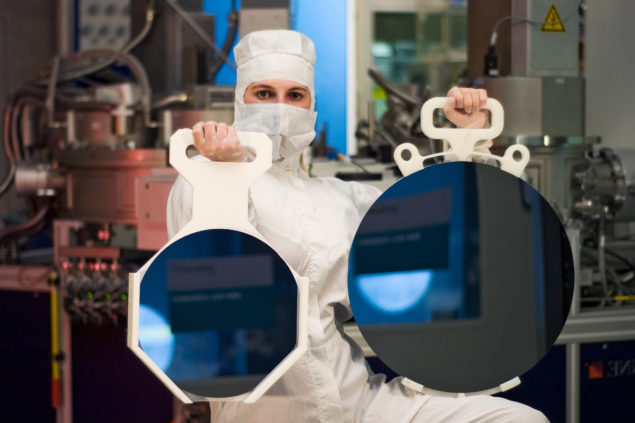 TSMC and others, demand LCD clients to shift to 300mm wafers; want to free up 200mm production line

Now you will mostly see 300mm wafers referred to as 12 Inch wafers – which is not, strictly speaking true, since the actual size of the plate is 11.8 Inches – and when talking about dies the smallest measurement makes the biggest difference. Similarly, 200mm wafers are actually 7.9 Inch wafers. Now most of the high end customers have already shifted from 200mm to 300mm designs but it seems like clients behind LCD driver ICs have yet to do so.

The primary benefit of shifting to a bigger wafer is that even though the amount of dies that can be created increases proportionally to the etch step increase, the cost to do so does not. So you get more dies for the same cost. In the case of the 200mm to 300mm shift, fabrication facilities were able to achieve a saving of approximately 40% as compared to the older size. 11.8 inch wafers are now the mainstream standard in the Industry and pure play foundries have abundance of this in their manufacturing ability.

On another note, the Industry has been pushing for the shift to 450mm but it has been met with far more resistance. This is primarily because the cost in manufacturing is two fold (in very simplified version): one of the lithographic process and the second of the etching. Shifting to 450mm will reduce the etching cost, but because our lithographic processes are so advanced that they makeup more than 50% of the cost involved in fabrication, the actual saving from the shift will be roughly 10-20% - which might not be worth it considering the huge sunk cost and capital expenditure involved. At any rate, we wont be shifting till the year 2020.

The call to shift to 11.8 Inch wafers (for LCD Driver IC design houses) is because the companies can use the 7.9 Inch facilities for other purposes, diversifying their 200mm production capability and optimizing production. And since they have capacity to spare in the 300mm section of the production line, it will help in reducing costs as well – for both parties involved. Now according to a report by DigitTimes, it would appear that TSMC is being very forceful of the insistence for the LCD driver IC manufacturers to move to 300mm.

Not only would they have access to the 90mm process with much more mature nodes, but it would free up the vast majority of their 7.9 Inch production facilities. What TSMC has in store for its 200mm capability, we can only hazard a guess, but they must have landed quite a big win if they want that much capacity (and it probably will be someone on the niche side of things considering they do not want to utilize the 300mm facilities).