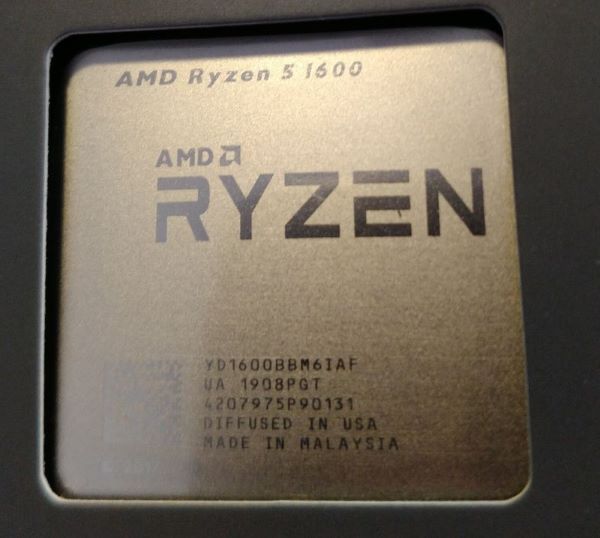 The AMD Ryzen 5 1600 CPU arrived back in 2017 with six cores & twelve threads and was based on the 14nm Zen core architecture, but a new version of the chip has reappeared in stock, featuring the updated 12nm Zen+ core architecture.

The primary way to show between these two different models is the serial number featured on the IHS. The original CPU should show YD1600BBAE while the newer CPU will show YD1600BBM6IAF at the bottom of the CPU. This variant of the CPU is now making the rounds and features the Zen Plus cores which compared to the older Zen cores offer slightly better IPC (3-5%) and a few overclocking enhancements.

The "AF" identifier was initially thought to classify the chips between two different steppings of the 14nm die. One Redditor recently received an AF version of the Ryzen 5 1600, and with the new microarchitecture shows a slightly faster boost speed being 3.7GHz, which is 100Mhz higher than the reference 3.6GHz and a boost multiplier of up to 37, but only briefly. The Redditor stated "That the original Ryzen 5 1600's CPU boost speed would drop down to 3.4GHz under any 1-2 core load. While the AF version of the CPU can sustain the 3.7 GHz speed for longer periods, which is only 200 MHz lower than the Ryzen 5 2600 CPU."

Along with the newer AF version of the CPU, this model comes with the Wraith Stealth Cooler, while the original Ryzen 5 1600 comes with a Wraith Spire CPU cooler. So far, it seems like just the AMD Ryzen 5 1600 has received the update to 12nm processor node, but if AMD has an extra 12nm dies at their disposal, we might even see some more first-generation Ryzen processors getting the update and being offered on retail soon.