Final Fantasy XIV 6.2, entitled “Buried Memory,” is almost upon us and Square Enix has released a full trailer for the content infusion. This update will see the Warrior of Light descending into various dark corners of the world, although it’s not all doom and gloom – you also get access to a sunny new island sanctuary! Overall, this update goes heavy on the new challenges, with multiple dungeons and trials to tackle. You can check out the Buried Memory trailer, below.

What secrets lie in darkness eternal? Five millennia ago, the great wyrm Azdaja vanished into the void, and for long years Vrtra had despaired of being reunited with his dear sister. With the encouragement of his people, however, he has found the resolve to search for her, and sets forth with the Warrior of Light for a world engulfed in Darkness...

After a battle hard-fought, order has been restored to Asphodelos. However, the inner circles of Pandæmonium remain in the grip of a mysterious force, and the remaining warders are nowhere to be found. You and your allies steel yourselves to press forward, but what awaits in those unknown depths may shake even the most steadfast resolve.

Having uncovered the voidgate in the undersea treasure vault, you now seek to use it to travel to the Thirteenth. Beyond the emptiness of the rift awaits a shadowed castle swarming with voidsent, and you steel yourselves for a hostile reception.

A request from a certain someone in Ul'dah has you packing your adventuring gear, and descending once more into the underground waterways of Sil'dih. 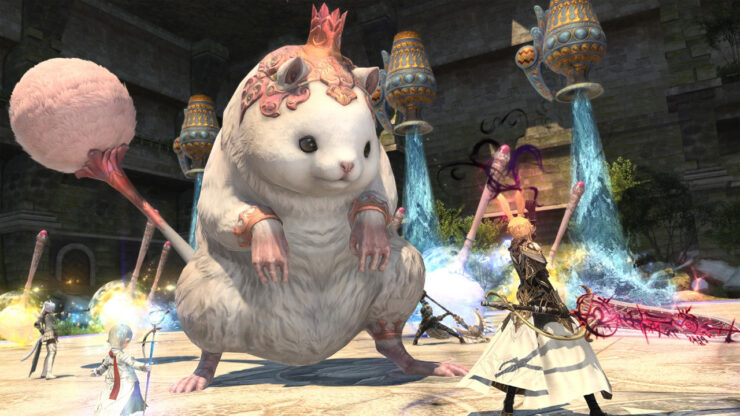 Whereas variant dungeons are casual, story-based experiences which can be completed by solo players, criterion dungeons will challenge a party of four adventurers with battles of punishing difficulty. Criterion dungeons are available in two difficulty levels, and impose unique rules and restrictions─such as limiting character resurrections. Assemble a band of trustworthy comrades to overcome every obstacle and explore every corner of the subterrane!

In the name of satisfying the faux commander's craving for harrowing tales, you hearken back to your fateful encounter with the dread eikon Sephirot, first pillar of the Warring Triad. The memory still looms as large in your mind as did the great Fiend, stirred from dreams of vengeance...

Find sanctuary in an island paradise abundant with wildlife, where crops may be sown and minions let to roam. What will you learn in nature's embrace─and what will you create from this newfound inspiration? Make ready to set sail, for your hideaway awaits!

The Warrior of Light arrives in the void. And in that endless dark, they shall encounter a terrible new foe…

The Duty Support system has been expanded to include five additional dungeons from A Realm Reborn and Heavensward, some of which feature key characters from the story. Certain trials have also been revamped for a smoother adventuring experience.