Facebook has today taken the wraps off a new feature which the company is calling 'Reactions.' The feature includes six emoji characters, and will compliment the 'Like' button which we've become accustomed to for a long, long time. 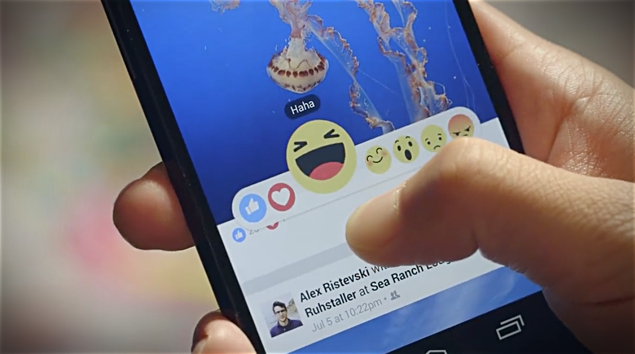 Mark Zuckerberg, in a Q&A session confirmed that the social network is working on a 'Dislike' button, which will sit alongside the 'Like' button, of course. Fast forward to today, Facebook has taken the wraps off a new feature which it is calling 'Reactions.' And the way it works is absolutely genius and we're certain that Facebook users are going to love it.

Reactions is more like a complimentary feature to the already existing Like button on Facebook. It includes six different emojis, which users can select apart from the Like button to show their 'reaction' towards a post or status update. The emoji represent the following reactions: Love, Haha, Yay, Wow, Sad, Angry. The visual representation of the emojis are as follows:

As you can see from the image above, Facebook didn't quite add in a 'Dislike' button which millions have been hoping for. It's also quite possible that Reactions is not a part of Facebook's Dislike plan at all.

Reactions will be rolled out for mobile and Web users both, and will initially be limited to Spain and Ireland. Later on it will be expanded to other regions. When will that exactly happen? We can't say for sure. But given it's a feature many would want to use, we're certain a larger rollout will take place fairly soon.

In case you're wondering why Spain and Ireland at first, then the reason for that is a simple one: Facebook wants to use the feedback to aid itself in a larger rollout. During this time period it wants to iron out all the bugs and make Reactions ready for everyone else around the globe. Also, because both of these countries have user bases with a not so extensive international friends network. This on the other hand, aids as a closed test group for the feature.

It's also worth mentioning here that it's unclear whether or not this feature will extend to Facebook's other apps and services as well, such as Messenger or WhatsApp.

If your'e living in Ireland and Spain right now, then you can get up to speed on Reaction right away. And if you do happen to use it, then do not forget to let us know in the comments section what you think about Facebook's new feature.

Meanwhile, do check out the video we have embedded below showing off how the feature works.

Today we’re launching a pilot test of Reactions — a more expressive Like button. As you can see, it’s not a “dislike” button, though we hope it addresses the spirit of this request more broadly. We studied which comments and reactions are most commonly and universally expressed across Facebook, then worked to design an experience around them that was elegant and fun. Starting today Ireland and Spain can start loving, wow-ing, or expressing sympathy to posts on Facebook by hovering or long-pressing the Like button wherever they see it. We’ll use the feedback from this to improve the feature and hope to roll it out to everyone soon.