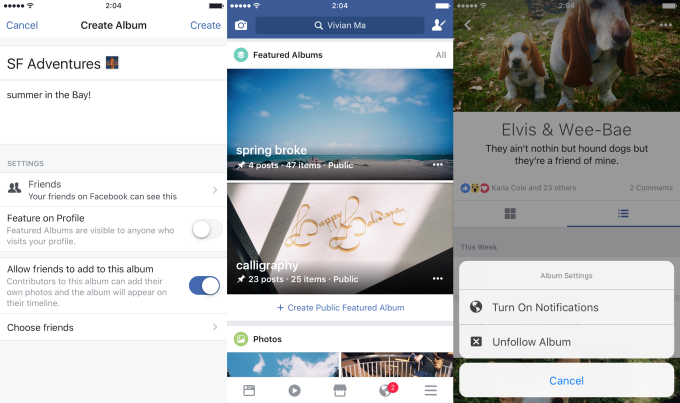 Facebook is overhauling its photo album. The redesigned photo album can add text posts to albums, videos, check-ins, follow friends' album to get a notification on the addition of a new item, and also display featured albums on your profile to flaunt your favorite ones.

In addition to a slew of new types of items, Facebook has also simplified the method to add contributors to a collaborative album. Interestingly, the contributor option for albums has been there since 2013, but not many users are aware of it. The upgrade to photo album by Facebook enables users to create albums quickly and add contributors with just a click.

This update lets users do with more photos on Facebook. They can now organize their photo albums by a certain topic. Albums are no longer subjected to just one person; users can invite as many collaborators as they wish. It is an ideal setting for group trips, wherein you can just create one album and all the trip members to it. This way, all the trip photos will be uploaded to one place - eradicating the need for separate sharing. Just like scrapbooks, users can now add their road trip check-in, text posts, photos, and videos - all at one place. Like a beautiful memorabilia, right?

Thankfully, similar to notification turn-off option that you get on regular text posts, Facebook will let you turn-off or turn-on notifications for friends' albums. Obviously, you don't want to get back to back notifications when your friend is on an uploading spree.

With this upgrade, it looks like the social media giant is all decked up to compete with Google Photos, which was recently upgraded by Google with a handful of new features that make it niftier. Google Photos not only stores your photos, but it also detects who's in them and presents instant sharing options to share the image quickly. All the new features on Google Photos have been present on Facebook's Moments app, but now Facebook has jumped into the game with an upgraded photo album.

It would be interesting to see if users find all the features helpful or not. What's your take on the latest additions? Share your thoughts in the comments section below.