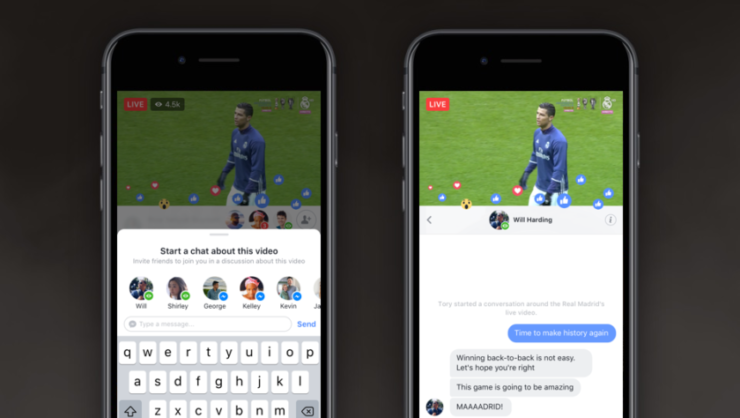 Facebook's live streaming feature has had its fair share of highs and lows. The social media giant has its main focus on the "Live" feature, and today, it has launched two new options for live video - Live Chat With Friends and Live With.

To recall, the Live With feature is not entirely new as it has been available for the celebs and other influential accounts. Now, the company has rolled it out to all the iOS users. The "Live With" feature lets you add a guest to your Live video. Your guest will appear in picture-in-picture screen mode or side-by-side on your video; you will decide the video style. Such feature could come handy for the users who want to conduct a fun live video with their long distance friend. It could also be of great help if you just want to add your friend to the video for a brief duration - just to validate your point or to make the video even better.

The second feature - Live Chat With Friends let you have your personalised comment section below the live video conducted by any media page or friend on Facebook. It will allow having a discussion under a live video with select friends instead of everyone who has tuned into the live stream. It's like your personal comment box with just your friends, wherein you can chat live. You can use this feature by sending invites to friends who have already tuned into the open live stream and even the ones who haven't. This feature also lets you shift from private conversation to public conversation throughout the duration of the live video. It will also let you carry on the discussion with friends even after the video ends.

For now, Facebook is rolling out these features to select iOS users all around the world. It has plans to roll it out to everyone (Android users too), by the end of summer.

Meanwhile, you can check out the dedicated support page for the feature on Facebook. It will show you how to use these features on your mobile and desktop.