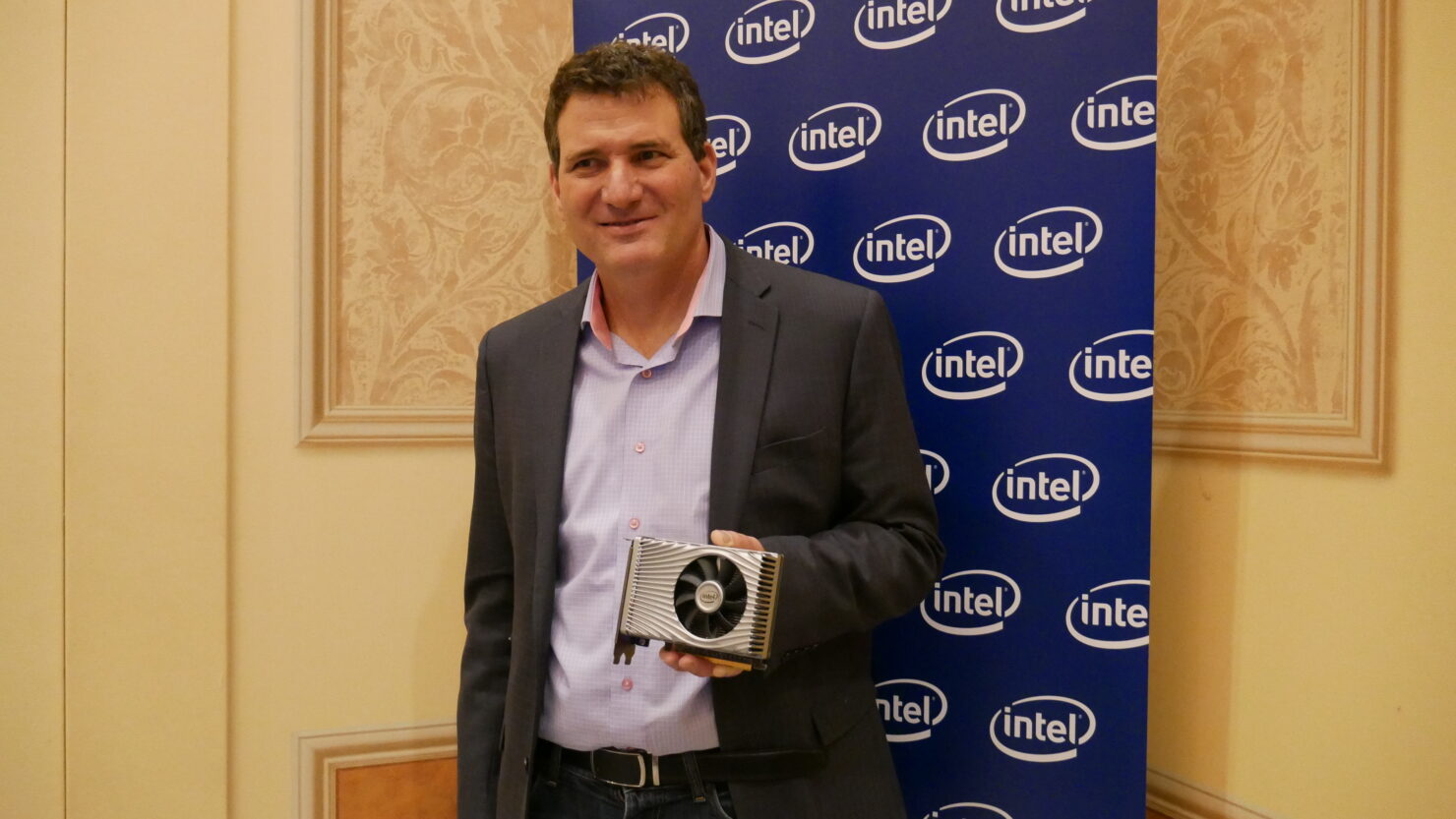 Although Videocardz has pretty much leaked everything to know about Intel's launch, here is our official coverage as well as hands-on by our US Editor, Keith May who there at the press event. A lot of people were complaining that Intel did not show off their next-generation Xe graphics card at CES. Well, Intel did actually show off the card to select press and here is our piece on it! In what can only be called a historic day: Intel has finally demonstrated its first, fully-working discrete graphics card (the DG1) and boy does it look good. The Intel DG1 GPU is the first step in Intel’s plan to take on NVIDIA and AMD in the discrete graphics market and change what has historically been a duopoly into a triopoly. According to Intel, the DG1 software development vehicle is being sampled to ISVs right now.

Intel had already demoed Xe mobile in their official presentation but this is the first time we are getting a look at the working DG1 GPU. They seem to have more or less finalized the look of their DG1 graphics card (as far as the software development vehicle goes at any rate) and while this is not a retail product yet, it is fairly retail-ready. There were a lot of concerns with some of the fan-concepts with regards to technical feasibility of the designs (they were mostly very hard to CNC) and people were wondering what Intel will eventually go with. The final result seems to be a grounded-in-reality yet whimsical look that I personally loved.

The card is made from an all-aluminum shroud (considering one of the journos dropped it during the demo, we know for sure its metal and not plastic) that has wind lines running across its body and a single off-center cooling fan. It seems to feature a very simple heat sink - which isn’t surprising considering this card won’t be producing a ton of heat. Intel does seem to have payed homage to the RGB gods because the Intel Xe DG1 graphics card features a strip of RGB lighting near the start of the shroud that offers a very nice look – something we have not seen in budget cards before.

Intel has also confirmed (again) that the Xe DG1 GPU is part of the low power (LP) series and is not the product that gamers will get – which will be part of the high power (HP) series. The entire purpose of DG1 is to serve as a sort of training wheels for the rest of the ecosystem to prepare for the arrival of Intel’s serious products later down the line. Here are some additional looks and renders:

Intel’s demo of the Xe DG1 was running in an external housing and you could only play one game on it right now: Warframe. The GPU was connected to a 1080p TV and while you can read more about our hands-on experience below, the general consensus is that performance was very satisfactory. The Intel Xe DG1 GPU features 3 DisplayPorts and 1 HDMI port. It also does not require a secondary power connector and draws all its power from the PCIe grid. This is essentially a plug and play affair if Intel ever decides to go retail with the DG1. 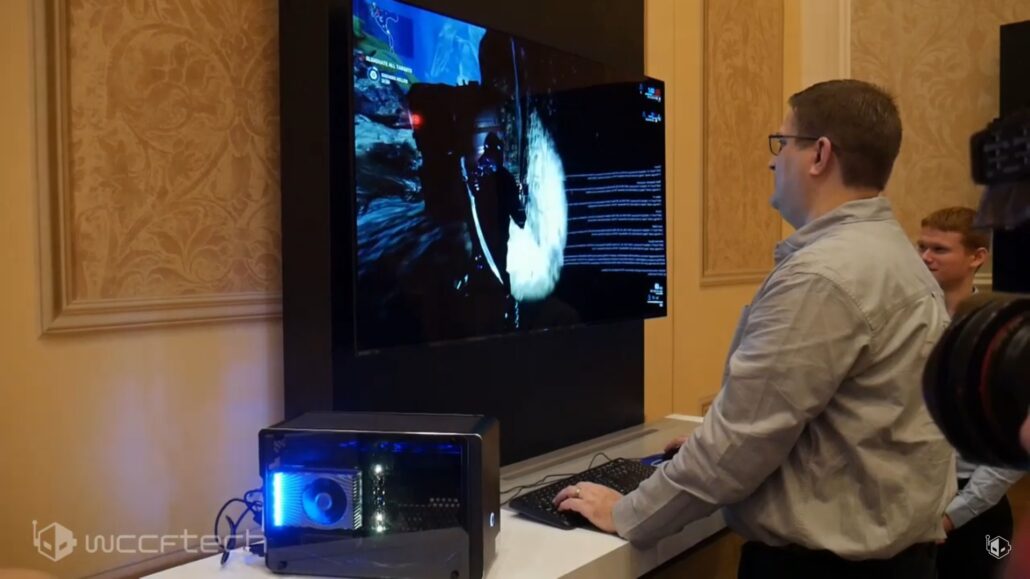 The graphics card is meant to be a platform for AIBs and ISVs to independently test and optimize-for the Xe architecture. Considering this is a prototype, we were expecting the card to be somewhat glitch but as you will read later in our hands-on, the Intel Xe DG1 software development vehicle performed exceptionally well. On a side note, the company also revealed that Integer Scaling will be coming to Tiger Lake and by extension the DG1. 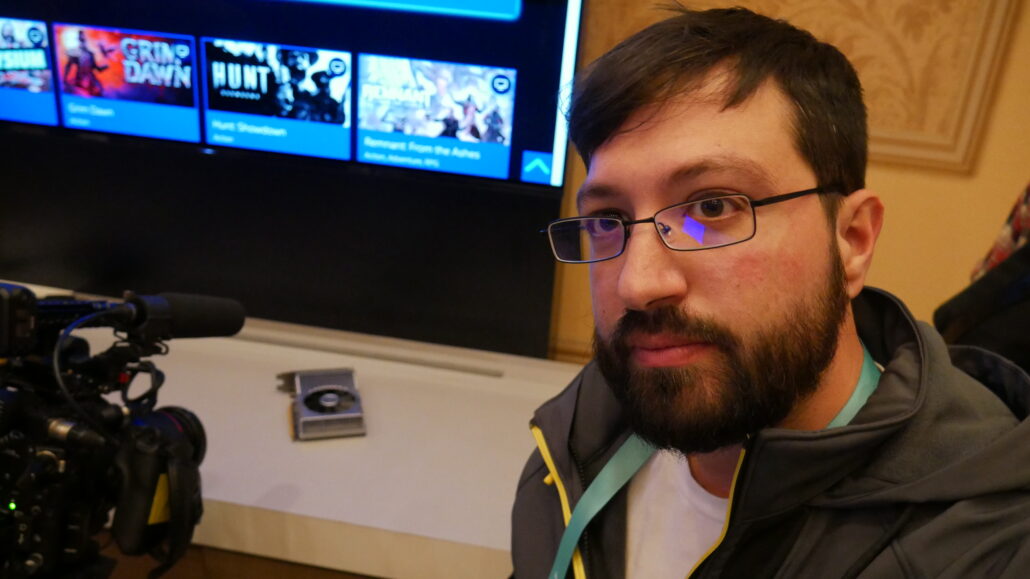 Getting to hold the DG1: Software Developement Vehicle was a pretty neat experience. It gave me the opportunity to feel the quality of the build which was quite nice for such a small and low key card. The aluminum shroud and backplate gave it quite the premium feel and look for what it was. The heat sink inside was surprisingly small indicating an obvious low power part. I/O on the rear is good for this class of card as well.

A nice added touch was the RGB lighting on the card, it was set to blue for the demonstration and we weren't able to change it up. I did ask if we could take the card apart since I had a screwdriver in my bag, that was sadly declined. But, we did get to play a game on it. Warframe was the flavor of the day with it loaded up on an already running system in a Raijintek Ophion case showcasing just how small the card itself was.But, at this point we've already established the card was small. In the video we've included there is a segment showing Jarred Walton of PC Gamer playing Warframe on the DG1.

I also got a bit of chance to take control of the game give it a go myself and see how it did. If I'm honest I expected graphical anomalies and maybe somethings to not render correctly, but I found none of that. The game was running like it should, with one caveat to the setup they had, no one should ever game with mouse sensitivity that high! It made it hard to get a sense of the games performance so I had to rely on forward, back, and jumping about to get a feel and it was quite fluid.

The overly sensitive mouse made it feel like it was running lower to others than what I experienced having recently been playing this game using a Ryzen 3 3400G, this was running a good bit smoother than that. The DG1: Software Developement Vehicle is on its way to developers so that they can start testing it with their respective software suites, games, and more so it appears that the wind has finally really filled the sails on the ship that is Intel's Odyssey.