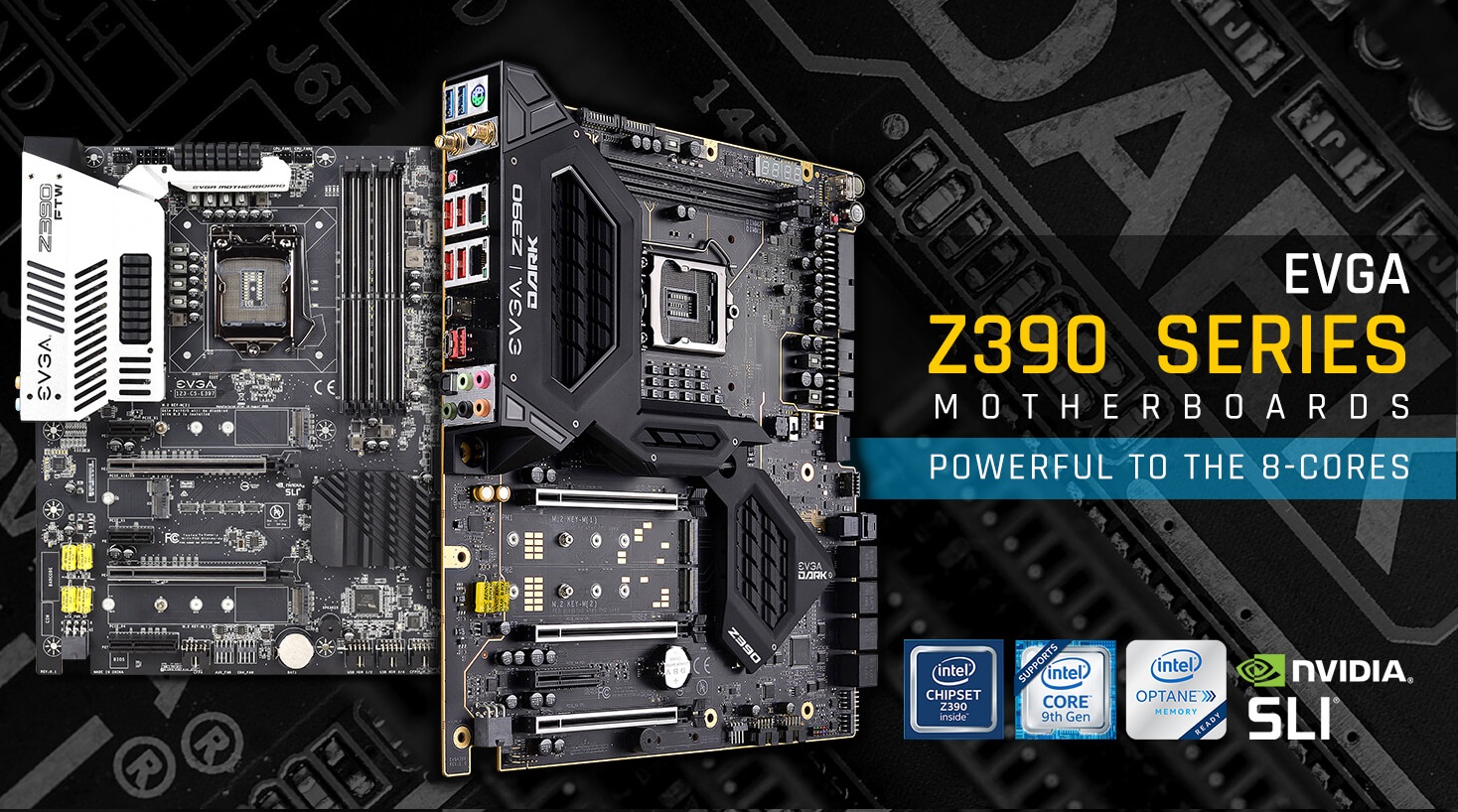 EVGA has also announced their next-generation Z390 motherboard lineup which includes the Z390 DARK and the Z390 FTW. Both motherboards have been designed from the ground up, offering the best overclocking capabilities and the most unique designs to be seen on a Z390 chipset-based product.

Starting off with the flagship, the EVGA Z390 DARK is the most uniquely designed motherboard we have seen to date. It comes with the LGA 1151 socketed which is tilted in a 90-degree angle, facing the 24-Pin ATX power connector.

The motherboard comes with a 17 Phase VRM design that uses really high-quality components and gold lining for every single component to enhance the power delivery. EVGA uses all angled connectors on their boards which include the 24-pin ATX connector and dual 8-pin power connectors for easy cable management. In addition to the that, we will be getting a 10 layer PCB and a range of switches which include the following:

The 10-layer PCB is studded with multiple sensors to track a variety of temperatures and voltages across the board, which can be displayed on the dual-LED displays. 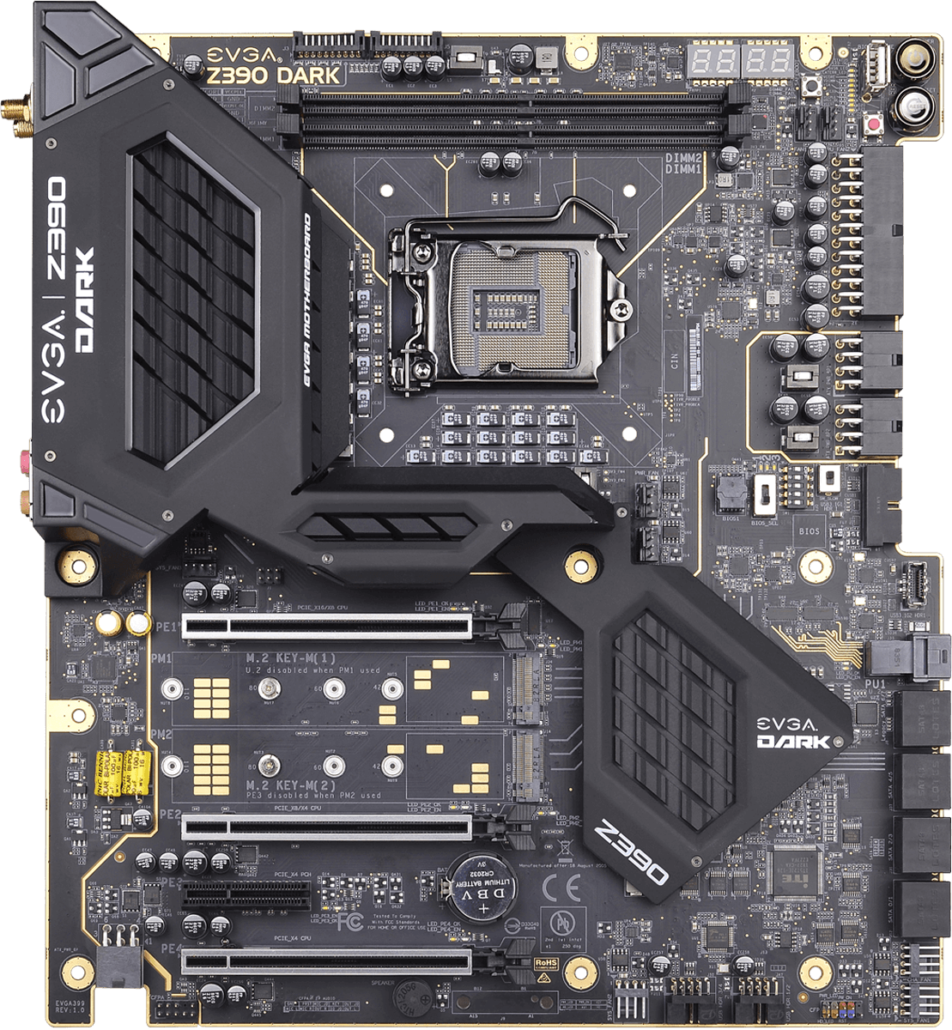 For its other features, the Z390 Dark contains Creative Audio + EVGA Nu Audio, two Intel Gigabit NICs, mini-Display Port, onboard power/reset/CMOS buttons, PCIe disable switches, triple BIOS support, 8 smart fan headers, and more swagger than any motherboard should have a right to wield. If you’ve been holding out for a serious motherboard to upgrade, the time has come. Go on, the Dark is waiting. 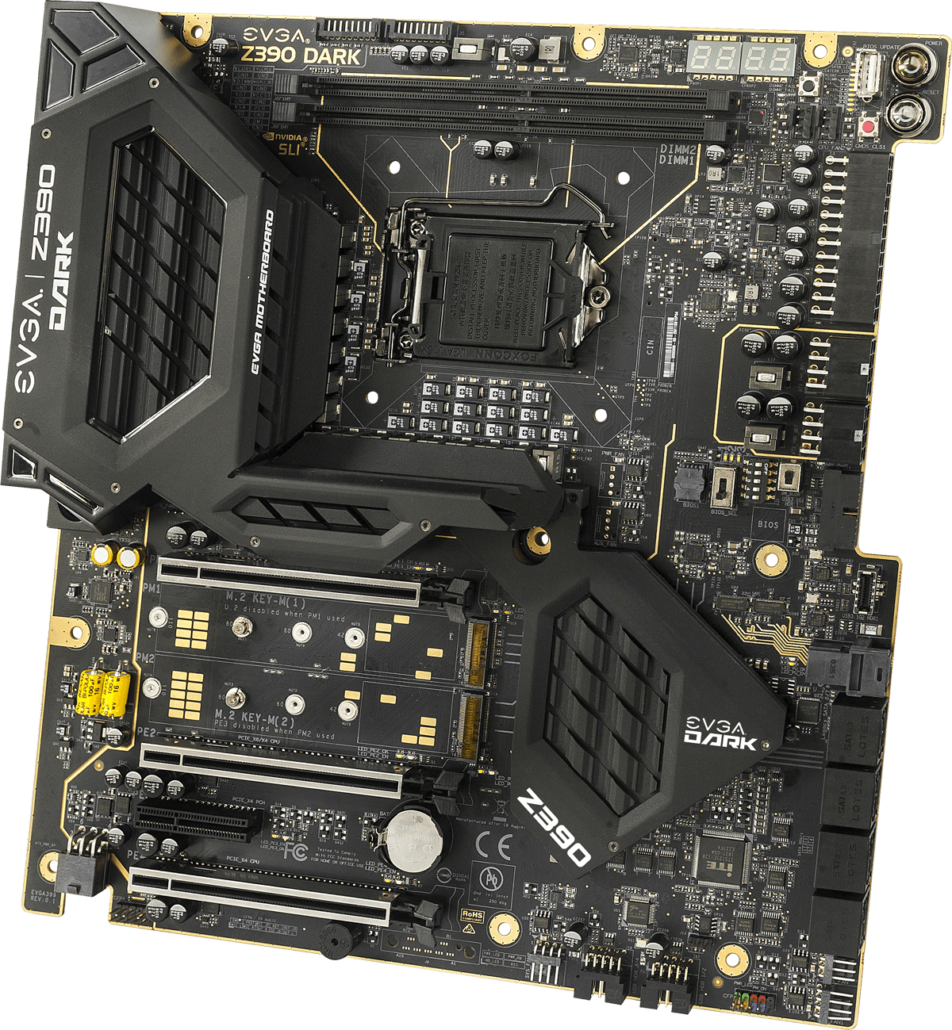 There are two DDR4 DIMM slots on the motherboard which enable support for high frequency and low latency memory, a must for overclockers. The entire VRM and chipset area is covered by a very big shroud which contains multiple heatsinks for each individual and critical motherboard area. In terms of expansion, the motherboard has three PCIe 3.0 x16 slots, a single PCI-e 3.0 x4 slot, and 2 M.2 slots. Storage options include 8 SATA III ports and a single U.2 port. Some overclocking specific features include:

Moving on to the Z390 FTW, we are looking at the classic EVGA motherboard design with the white I/O shield and the matte black PCB. The motherboard rocks an 11 Phase VRM and maintains all the basic features of good and high-quality Z390 product.

With The EVGA Z390 FTW, high-end gaming is now better than ever without costing an arm and a leg. Featuring 6 SATA ports, USB 3.1 Gen2 Type-A and Type C ports, USB 3.1 Gen1 ports, USB 2.0 ports, multiple M.2 sockets, Intel Optane, 7.1 Channel Audio with EVGA NU Audio, and an Intel Gigabit NIC, this board is ready for everything.

However, this board wouldn’t be FTW without a highly-efficient Digital VRM connected to an 11 Phase power design, 2-way SLI support, metal-reinforced slots, and EVGA’s New GUI BIOS featuring OC Robot and an in-BIOS stress test. The EVGA Z390 FTW is primed to be the center of everything you do next.

Prices for either Z390 board are not mentioned by EVGA but they are listed as "coming soon" so maybe we will get to hear more about them in the coming weeks since the Intel 9th Gen CPUs do launch on 19th October, officially.