Eve Valkyrie An Oculus and PC Exclusive, For Now

One of the more exciting titles that makes use of VR technology is that of Eve Valkyrie. The space combat simulator features some very fast paced and gorgeously rendered combat scenes that rival the other entries into the space sim domain. One surprising thing, though, is that apparently Eve Valkyrie is going to use Oculus VR technology on be on the PC exclusively. 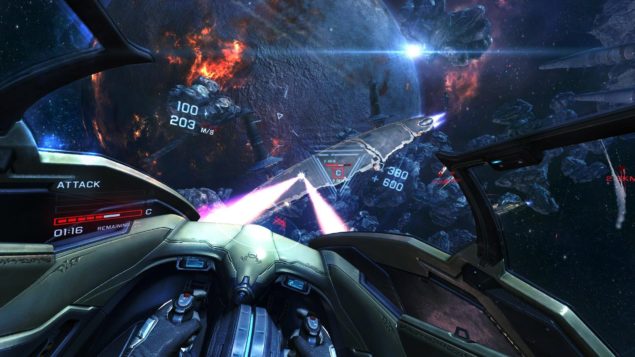 Eve Valkyrie is going to exclusively use the Oculus Rift VR headset on the PC only, as was revealed at the EVE Fanfest recently.

PC Gamer was able to speak with Owen O'Brien, the executive producer for Eve Valkyrie, about the upcoming game, and he was actually quite coy about the real answer. He never really answered the question, and just mentioned that it's an Oculus exclusive. It's really a non-answer.

"We are exclusive on the Oculus on PC at the moment, but we're not ruling out other platforms in future. We're making a 'VR' game, ultimately."

O'Brien did mention that the other future platforms, like Valves, Razer's open source concept or even Samsung's platform, aren't completely out of the running. Development started on the Oculus Rift so it stands to reason that they'll continue down that path, due to the proprietary drivers, until they have the time to add support for other platforms.

With so many different options arriving soon it would make logical sense to support them all, but that costs money and development time. I'm not sure of the underlying platform that Valve uses though if it isn't open source and compatible with other products, then each platform will have to have time committed to them. That's doesn't necessarily make business sense.

Regardless of what platform they chose to start making the game with, CCP Games is certainly excited about the direction and future of VR and want to be a driving force in bringing it to the masses. They're masters of high quality games, even Dust 514, and Eve Valkyrie will most likely be one of the better examples of how to properly use VR technology.