We all know that Epic Games aren't exactly short of cash, that much is certain. If allegations posted by players on Reddit are to be believed, Epic Games are saving a bit of cash by not paying players the prize money won in Competitive Fortnite games. Or, to be more precise, they are allegedly not paying a large portion of players.

It was only recently, in February, that Epic Games announced the second Fortnite World Cup, with a prize pool of $100m. This is following a 2018 Fortnite World Cup with the same prize pool. More than the world cups, Fortnite has had a number of competitive events. The problem is that, according to a thread in the Fortnite Competitive Reddit posted by user Returnoftruth, players aren't getting paid.

The post, which includes an image highlighting a tweet from user FNATIC MOTOR highlights that Epic Games haven't paid players from the Epic test customs, with a reply to the tweet from one player stating they haven't been paid from the Secret Skirmish, held in February. 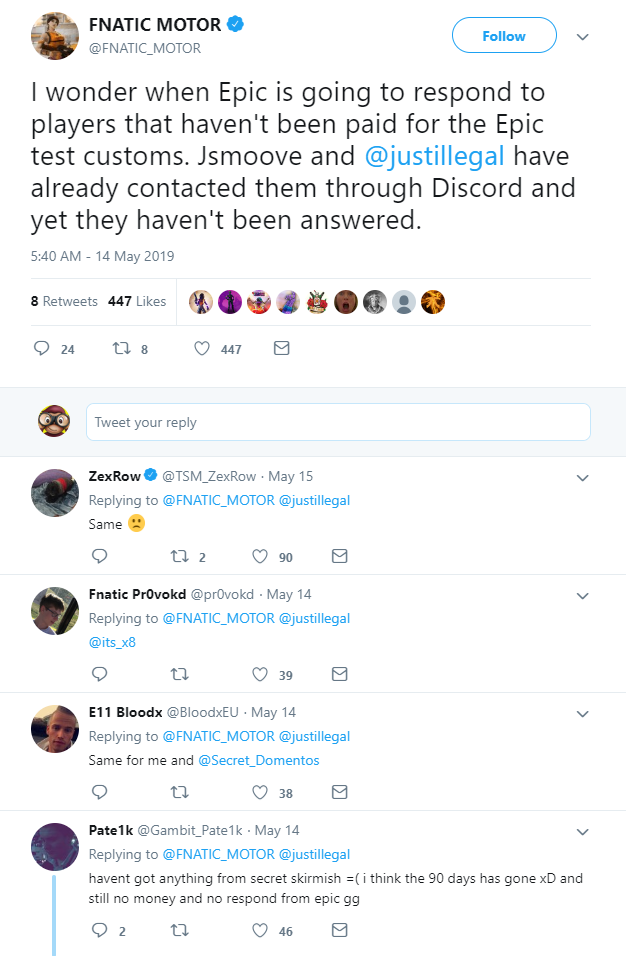 The core issue here, other than the obvious lack of payment, is that Epic Games are accused of essentially being silent in the matter. Players are complaining about the lack of communication and it's said to be a constant point of discussion in many competitive Fortnite discord servers.

It is also noted by Returnoftruth that "Some of these payouts even exceed $9,000" following it up with "Still, these players are being ignored despite being proactive. Epic has even gone so far as to say that certain players were never at the event, when it’s quite easy to prove".

This thread hasn't gone completely ignored by Epic Games though, with a member of staff having replied, linking to a blog post on the Epic Games website that is kept updated with information regarding payments. According to this page, there are 43,285 payments promised to players going back to July 2018. Of these, only 4,398 of these have been sent out. It was also stated that they are also waiting for confirmation from 1,687 players for payments to be sent out.

The member of staff from Epic Games, DanDaDaDanDan, did also state that changes have been made to improve the situation for these players. In a reply, he stated:

We changed how we internally track emails sent to competitive-payments and are now routing them directly to our ticketing system for customer support. This allows us to properly track and monitor at scale and should improve communication.

We are going to be consistent and pro-active when it comes to reaching out to players that haven’t been paid out yet. There is a big point of confusion where we are waiting on complete tax information without that being clear to players. Regular communication on next steps should help keep things moving.

Our payment portal is undergoing some work to make it easier to enter the proper information and let you know what is missing. We are also working with a third party service to help administer payouts. 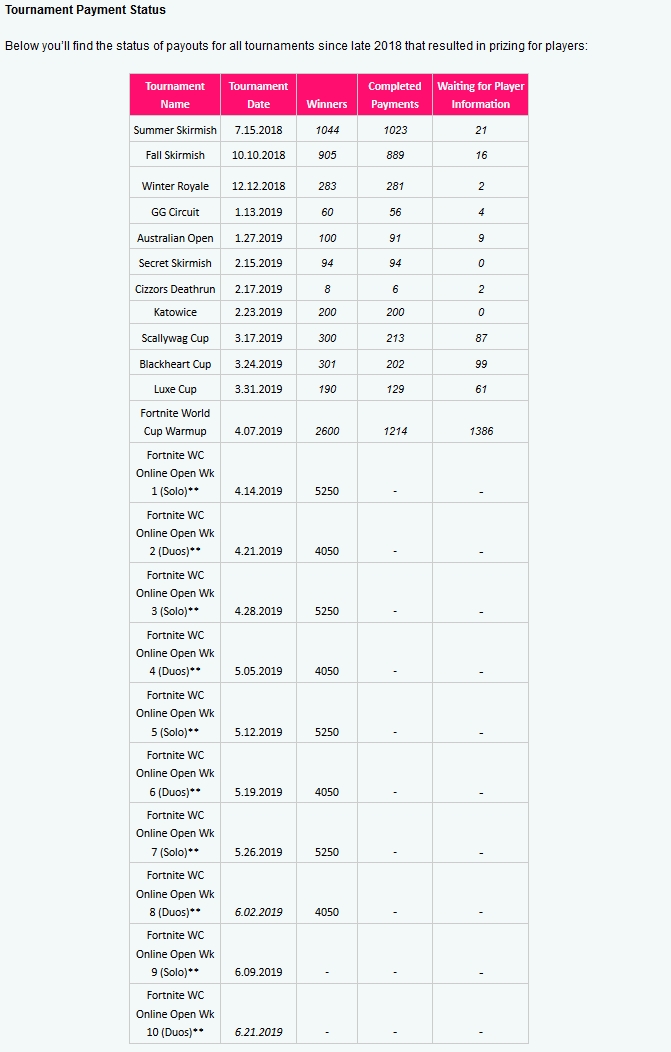 What is a staggering figure, however, is the 37,200 payments that Epic Games have stated that they are holding back. All of these payments are related to the Fortnite World Cup qualifiers, where the company states it is verifying and filtering out results, ensuring nobody who is ineligible for any reason receives a payment. Another aspect, when it comes to the Fortnite World Cup, could also come from the rules which state:

Upon formal notification from Epic, a potential winning player shall have 45 days from the date such notice was emailed to respond and provide any information or materials requested by Epic, including the Release (as defined below) for purposes of verification of eligibility pursuant to Section 3.

I would imagine that the relevant information has been provided by those winners. I know if I won anything, I'd be giving the information to collect my prize. However, I cannot say for certain that the players who are entitled to payment did send in the information in time, or if the information was correct. My advice would be for these winners who have yet to be paid, double check to be certain.

Regardless, with the prize money from the Fortnite World Cup being held back for everybody, that's a sizeable, active and likely vocal group of players who will be getting agitated. This Reddit post will likely be the start of matters if payments aren't cleared, particularly those from even older tournaments. Especially due to the fact that there are more Fortnite tournaments to come.

It certainly seems that Epic Games has put the cart before the horse and are unable to keep up with making the number of payments they have offered. Not due to the monetary value, but due to the sheer volume. Even worse is the optics of holding back over 37,000 payments while they check the games themselves. That seems like such an incredibly time-consuming aspect if the staff and resources aren't yet in place.

Should Epic Games be open and pro-active, as was stated in the Reddit reply, then that is certainly a good start. More than anything they need to get started now. If they don't, the list of payables will only increase, making an even larger backlog and a larger group of unhappy players.