At the launch event of Tesla's latest electric vehicle, the Model S Plaid, company chief Mr. Elon Musk shared new data which highlighted Tesla's vehicle safety. During his presentation announcing the Plaid, Mr. Musk revealed that while the new vehicle is yet to receive a safety rating from the United States government, Tesla's internal tests have led the company to believe that the Model S Plaid can achieve the lowest probability of injury for any vehicle tested since 2011. Tesla made similar claims for the Model 3 in 2019, following which the National Highway Transportation Safety Administration (NHTSA) issued it a cease-and-desist order, as it worried that Tesla was gaining an unfair marketing advantage with the claims.

The thirty-minute presentation covered several details for the Model S Plaid, which Musk is marketing as the world's fastest production car. Tesla's marketing materials for the vehicle state that it can accelerate from 0-60 miles per hour in 1.99 seconds, with a top speed of 200 miles per hour. Naturally, the figures of acceleration are often cherry-picked from a series of test, and actual figures will only be for certain once the Plaid is available for independent testing,

In the middle of his presentation, the Tesla chief shared details for the Model S Plaid's safety. According to him,

And then it's also engineered for maximum safety as well. So, in fact, this is designed to be, our aspiration for this car its supposed to be tested by the U.S. government, but we think we can get the lowest probability of injury of any car ever tested. So, in fact, these are the actual NHTSA probabilities in injuries numbers. All top five cars, the lowest probabilities of injury ever tested all five are Teslas[CROWD CHEERING]. So, with the Plaid Model S what you have is a car that is faster than, quicker than any sports car, and  like faster than any Porsche, safer than any Volvo. The same car! That's insane! It's like...like..you know...yeah[LAUGHS]. 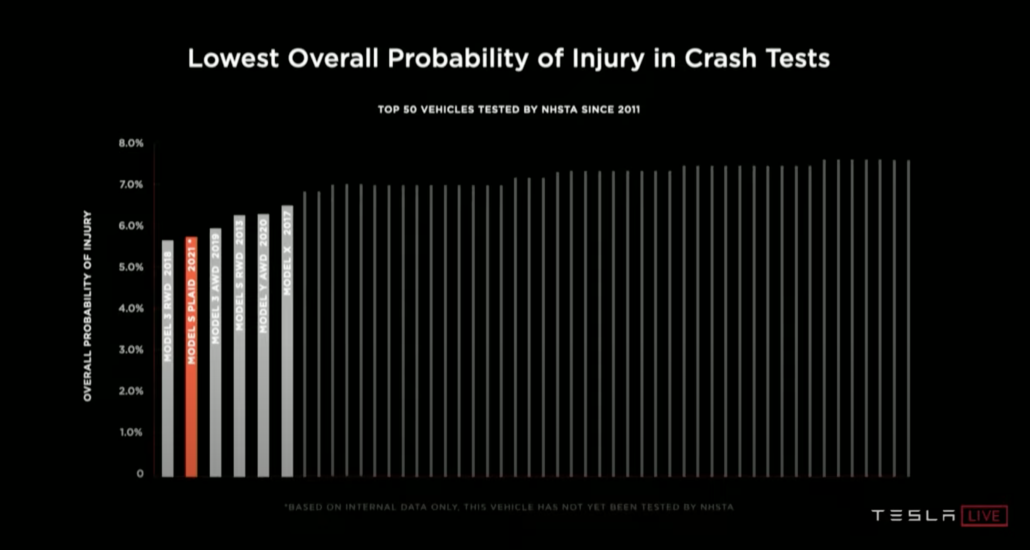 While Musk claimed during the presentation that the Model S Plaid could end up having the lowest probability of injury of any vehicle tested by NHTSA, the slid shred by Tesla during yesterday's event reveals that Tesla's internal tests show that the Model 3 RWD (Rear Wheel Drive) is slightly safer than the new vehicle.

The NHTSA has already chided Tesla once for using the 'probability of injury' metric for its vehicles. Back in 2018, the agency wrote to Musk complaining that a Tesla blog post contained the following statements that:

The NHTSA's objection highlighted that Tesla's statements did not cover areas such as a frontal collision with a sports utility vehicle (SUV) or a vehicle that is significantly heavier than a Tesla. It also added that Tesla could gain an unfair market advantage due to the blog post.

In response, Tesla stood its ground and replied that its post did not directly state that a Model 3 would perform in the case of a collision with an SUV. It also reminded the regulatory body that the Model 3 is heavier than the average mid-sized sedan.