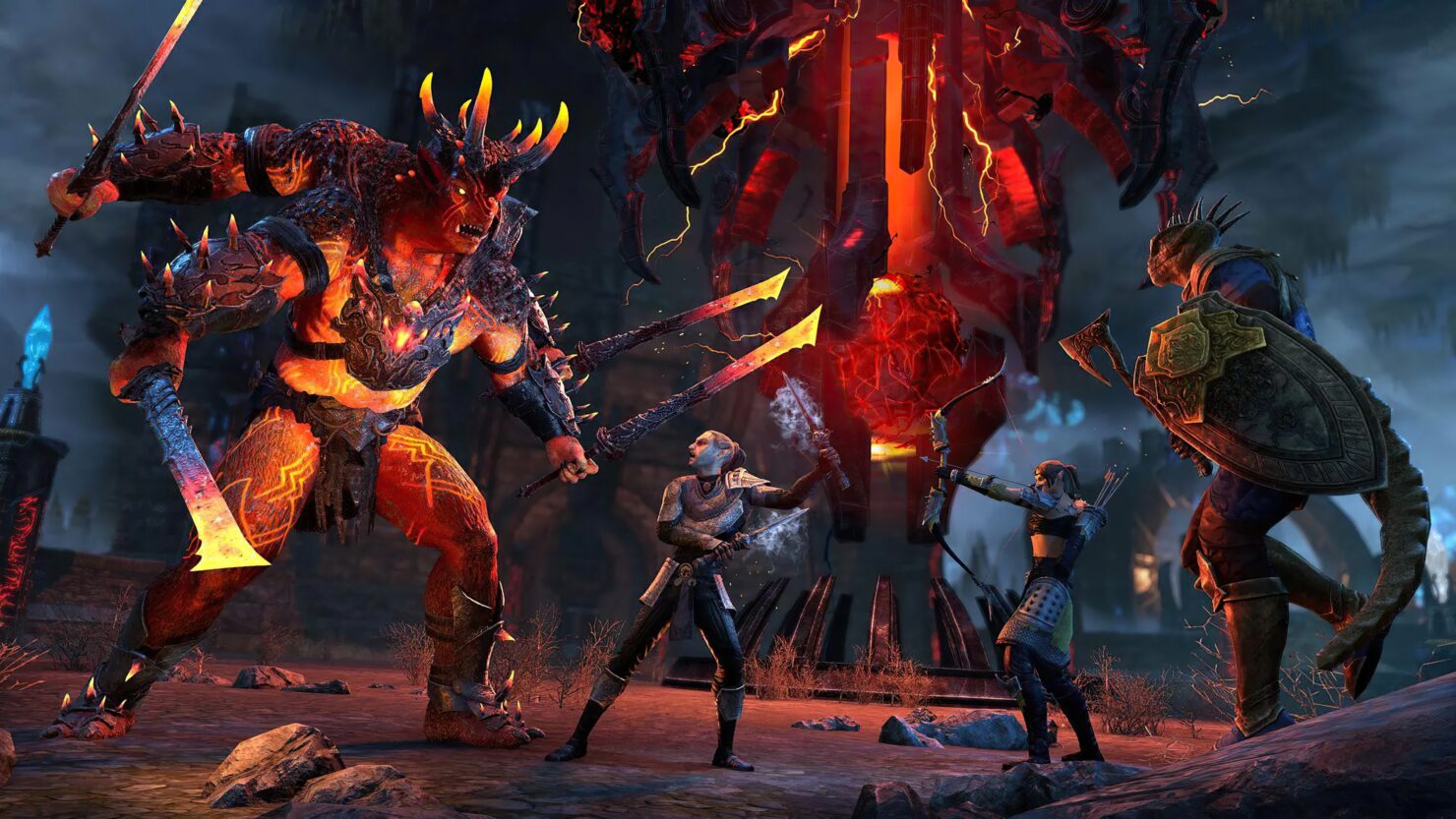 Elder Scrolls Online (currently 35% off on PC and Xbox as part of QuakeCon 2021) is one of the most successful MMORPGs on the market, having welcomed over 18 million players to date across the various platforms, and it's no wonder the developers are working hard to continuously expand it and improve it.

The recent Blackwood Chapter (the equivalent of expansions in Elder Scrolls Online) only launched a couple of months ago, and yet Zenimax is already about to release a new dungeon-focused DLC, Waking Flame, alongside Update 31.

This free update due later this month will also introduce a series of technical improvements to Elder Scrolls Online, such as better usage of next-generation consoles (via dynamic resolution), a new implementation of High Dynamic Range (HDR) support, and multithreaded rendering finally launching on PC. We discussed all of that and more, including the potential future addition of other prominent cutting edge technologies, with Elder Scrolls Online Lead Graphics Programmer Alex Tardif. 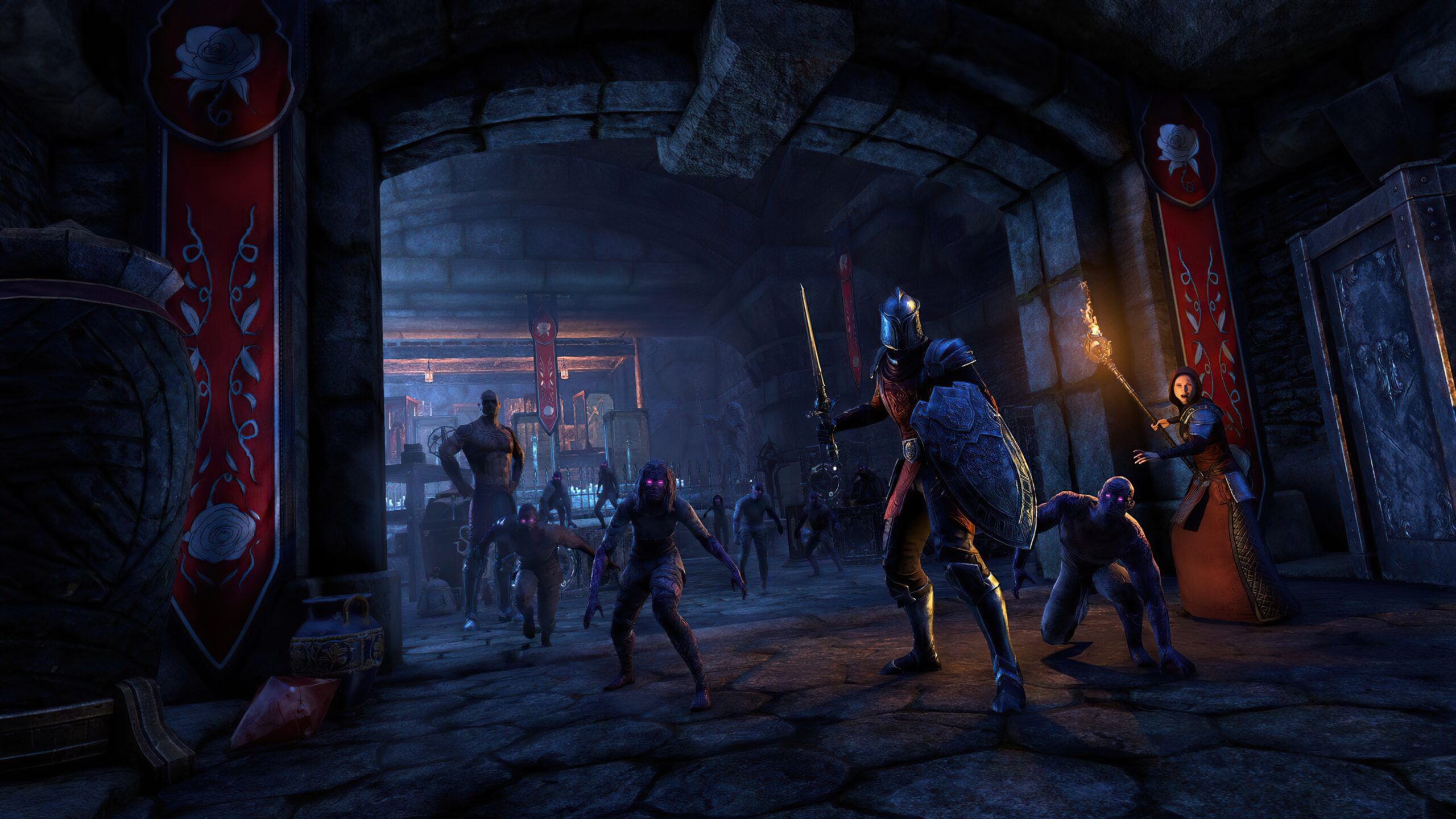 Can you talk about your approach to the next-generation upgrades for Elder Scrolls Online? How was your experience with these brand-new platforms, as a developer?

Alex Tardif: This was the smoothest console generation transition the game industry has seen, as evidenced by all the titles being ported so quickly, both on Xbox and PlayStation. Beyond the porting aspect itself, it was important for us to take advantage of the new hardware to give ESO the lift it deserved on new generation consoles. For us, that meant a 60fps mode, faster load times, and a ton of new features and improvements to ESO’s graphics.

Would you say there is now visual parity between the PC version of the game and the next-generation consoles, or are there still some differences?

Alex Tardif: They are roughly equivalent now in terms of visual features. On PC we support slightly farther view distances and higher resolution water reflections, but the differences there are minimal. While we did bring over existing PC features (water reflections, ultra shadows, view distance, high-resolution textures), it is worth noting that the following new features were only added recently to PC in preparation for the next-gen consoles: TAA, LSAO, SSGI, high-quality depth of field, grass draw distance improvements, and the new “Maximum” graphics quality option that turns all of these on.

When it comes to loading times, are next-gen consoles any faster than a PC equipped with an SSD?

Alex Tardif: Overall, loading times are lightning fast for ESO: Console Enhanced and they are roughly the same when compared to a relatively recent SSD on PC.

I noticed that you've opted to use native resolution with Elder Scrolls Online on Xbox Series S|X and PlayStation 5. Did you look into using some popular techniques such as dynamic resolution or checkerboard?

Alex Tardif: Indeed, we have. In the 60fps Performance Mode, we are shipping dynamic resolution scaling as part of our Waking Flames DLC release on Aug. 31rd. This will scale between 1080p and 2160p (4K) on Xbox Series X and PS5, and between 1080p and 1440p on the Xbox Series S. In most situations, this will result in higher resolutions than we had at launch a couple of months ago, while also allowing dips down to 1080p to reduce dropped frames in heavier scenarios like trials and PvP. This is unnecessary in the Fidelity Mode as we can comfortably maintain 30fps at native 4K resolution.

Some developers have mentioned having issues with the lower specs of the Xbox Series S. Did you encounter any problems while optimizing the game for this platform?

Alex Tardif: We didn’t encounter any real issues bringing ESO to XSS, but since we are porting an older title to a newer platform, it was a more straightforward process for us. We were happy to offer a Fidelity Mode for the XSS that exactly matched all the new graphics settings we used on the X and PS5 but at 1440p instead of 4K. The only major difference is in the Performance Mode, where we drop some of the newer settings like SSGI to hit the 60fps target on the XSS specifically, but this feels like a fair trade for those who prefer higher frame rates.

I've played the game for quite a long time on PC, even had my own guild until recently. At some point, the game received HDR support on consoles, but it was kind of broken, and it never really launched on PC. Are you looking into possibly having a proper, native HDR implementation for PC and consoles? PC and Xbox Series have Microsoft's AutoHDR, but of course, the native implementation is always going to be better, if possible.

Alex Tardif: Thank you for being a part of our awesome community! Yes, we’ve heard and listened to the feedback about the initial HDR implementation. In fact, our Waking Flame DLC will implement a new HDR mode that will ship as the new default mode. It’s a mode that preserves the hues of the game you see in SDR while taking advantage of the increased range. For those that like the current implementation, we still offer it as an option in the settings menu. Console Enhanced players can look forward to this feature debuting on Aug. 31rd. As for PC, we are looking into HDR support but don’t have further updates currently.

Since Elder Scrolls Online already supports DirectX 12 on Xbox Series X, is there any chance of PC getting official DX12 support at some point? If so, would you expect a performance bump?

Alex Tardif: The tricky thing with PC is that the DirectX 11 drivers are amazing. It can be deceptively difficult to take an existing game on PC and upgrade from DX11 to DX12 and get better performance. Oftentimes, it takes a significant amount of effort and refactoring before you’re even on par with DX11, let alone faster. There are stability concerns as well. When you have to manage all the memory yourself in DX12, you are now in charge of dealing with things like over-subscription on Windows, whereas this was well managed by DX11. There are more considerations as well, but it is all to say that the stability and performance offered by DX11 make it attractive to keep around on PC for now.

We still have plenty of bandwidth to make things faster before making the jump to DX12. For example, our Waking Flame DLC offers PC players a new beta setting called “Multithreaded Rendering” in our video options, which enables Multithreaded Rendering like we currently have on consoles, providing a much-needed boost to frame rates for those who are CPU bound (most people) while playing ESO. Players can look forward to this feature arriving on Aug. 23rd for PC.

Many developers are adding ray tracing support to their games. What are the odds this will happen to ESO? Also, what kind of ray traced effects would be optimal for ESO in your opinion?

Alex Tardif: We have considered this in the past, but we do not yet have plans for ray-tracing. If we were to implement it in the future, it would be used for ambient occlusion and global illumination, since other ray-traced features would likely require artists to go back and reauthor our materials and environments, and we have a lot of those at this point!

Did you look at the new Direct Storage API that's coming later this year to PC? What kind of improvements do you expect from it?

Alex Tardif: Direct Storage is an exciting advancement for PC. We already make use of it on Xbox Series X|S to great effect as it reduces time spent loading and streaming. In order to get it to work on PC, however, we’d need to support DX12, which ESO doesn’t currently.

Not long ago, you confirmed that the 12-person party limit is due to performance issues. Are you attempting to overcome this limitation in the foreseeable future?

Rich Lambert (Creative Director): Our current focus is on improving performance, but once we get overall performance to a place we are happy with, we can reevaluate this topic.

Is there anything else that you can share on what Elder Scrolls Online fans can expect on the front of tech upgrades going forward?

Alex Tardif: While I can’t share specifics, I can comfortably say that ESO players can expect us to continue making performance and fidelity improvements long into the future. The Elder Scrolls Online: Waking Flame DLC debuts on Aug. 23rd for PC/MAC and Stadia, and Aug. 31st on consoles.